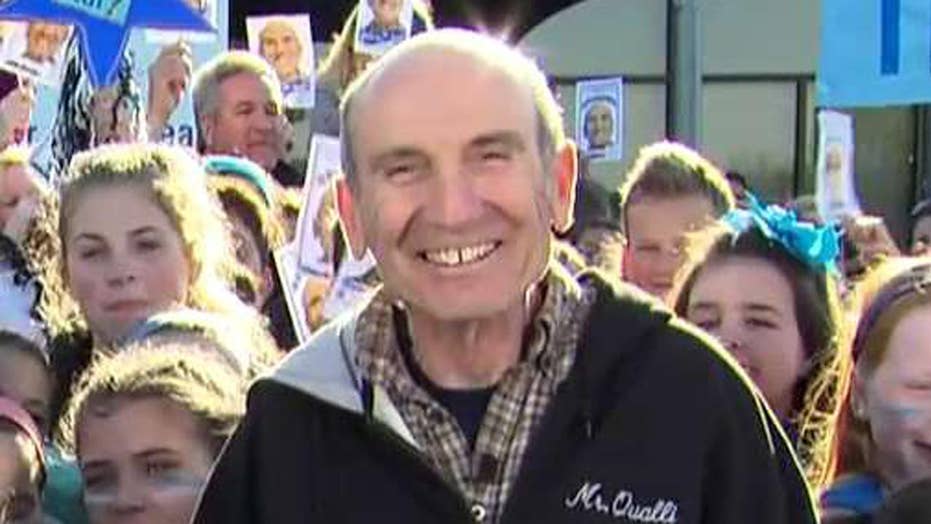 'Janitor of the Year' knows names of all 800 students

An Air Force veteran was honored – and surprised – this week when he found out he won a contest naming him the 2017 Janitor of the Year.

Ted Qualli, 66, works as a custodian for Newtown Elementary School in Bucks County, Pennsylvania. Students at the school gathered in the auditorium to celebrate his achievement.

"So overwhelmed. I was crying," Qualli told Fox and Friends of his emotions after hundreds of students surprised him with the impromptu celebration. "They really got me good. I had no idea what was going on. They told me I had an alarm here at the school and I responded."

"So I thought it was pretty serious that they weren't out, 'cause I was following the fire truck," he explained. "And then all of a sudden, all of these Qualli faces popped up, and I was crying. That's when I knew."

The students held signs bearing his smiling face that said: “Thank you, Mr. Qualli,” according to Philly.com.

"I couldn't believe it," Qualli said of his victory. "I didn't think I had a chance."

As part of the contest, run by business supply company Cintas, the school will receive $5,000 in services and products. Qualli also won a $5,000 prize.

He said he plans to buy a wheelchair for a family member and take his grandchildren to the Jersey Shore.

"He's about service to his country, to his community, to his family," school principal Kevin King said. "So it's a great story because he's a great guy. He works hard, he has a great work ethic, and he's the most humble person that you could meet, and we should all be more like Ted."

"Ted does everything from the heart, whether he's teaching students about his service to the country on Veteran's Day or handing out vegetable seedlings grown in his home garden to every student each spring," Cintas said Monday in a press release. "It's clear Ted is a friend and an inspiration in addition to being an excellent janitor."