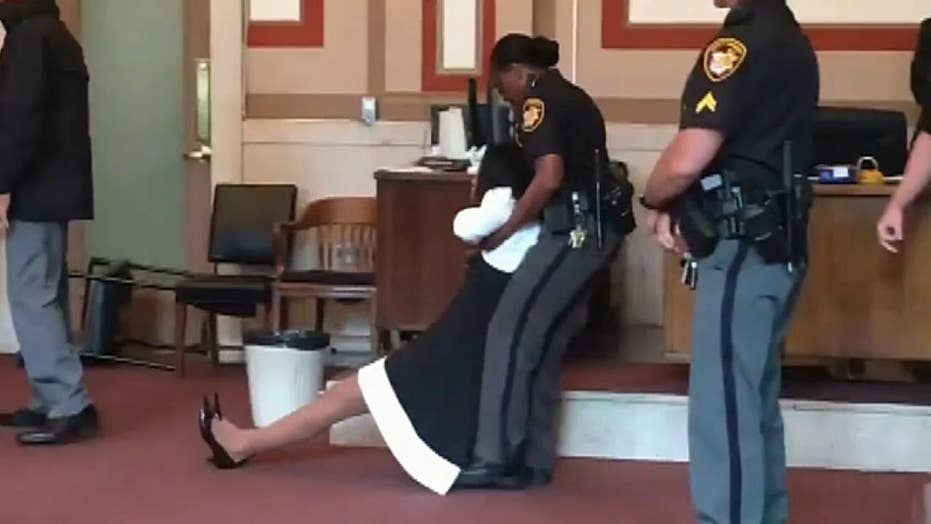 Raw video: Former judge is dragged out of the courtroom after being sentenced to jail

The former judge was sentenced to six months in jail.

A former juvenile court judge, a Democrat who took the bench after being declared the winner of a disputed 2010 election, was jailed Monday, and had to be taken out of the courtroom in Cincinnati, according to reports.

A deputy with her arms under the defendant’s shoulders pulled Tracie Hunter across the courtroom after she went limp. Supporters stood and yelled in anger, and deputies intercepted a woman who tried to rush to her.

There were more demonstrations outside the Hamilton County Courthouse, and civil rights activists said there will be boycotts or other actions in protest.

Hamilton County Common Pleas Judge Patrick Dinkelacker ordered her six-month jail sentence carried out after a contentious hearing in which he read from postcards with critical comments sent to his home in support of Hunter. He called them an apparent intimidation attempt that “flat-out failed.”

Fox 19 reported that Dinkelacker read a letter from Prosecutor Joe Deters that stated Hunter has “never once shown remorse.”

“She has been incredibly disrespectful to you and the justice system,” wrote Deters.

The prosecutor also added in his letter that he “believes she has some sort of medical condition."

Deters, a Republican, suggested she receive a medical evaluation, the news outlet reported.

A deputy with her arms under the defendant’s shoulders pulled Tracie Hunter across the courtroom after she went limp. Supporters stood and yelled in anger, and deputies intercepted a woman who tried to rush to her. (Hamilton County Jail via AP)

Sheriff Jim Neil, a Democrat, said Monday afternoon that Hunter will be housed in the jail’s medical facility, monitored by medical professionals and security staff.

“Ms. Hunter’s well-being and safety will be my No. 1 priority,” Neil said in a statement, adding that his staff will assess her eligibility for early-release programs.

Defense attorney David Singleton said Hunter already has endured years of uncertainty and lost her job and law license for what he called an unjust conviction and a sentence that is out of proportion.

“I can’t believe Deters would ask for her to be evaluated. There is no issue whatsoever about her not being competent or understanding. Absolutely not,” he said, as Fox 19 reported.

“She has gotten up each morning not knowing whether that was going to be the day she was going to jail,” Hunter’s attorney added. “I know the impact that this has had on her life. We believe it would be profoundly unjust and unfair and a waste of taxpayer dollars to incarcerate her even for a minute."

He said she is needed to care for her elderly mother.

Hunter, 52, had gone to multiple courts to challenge her 2014 conviction and sentence on a felony count of unlawful interest in a public contract, which charged that she provided a confidential document to her brother when he faced a disciplinary hearing in his court job.

A federal judge in May rejected her bid to avoid jail.

She had stood trial on other counts that were dismissed after jurors couldn’t agree on a verdict.

Attorneys for Hunter have contended the case against her was political.