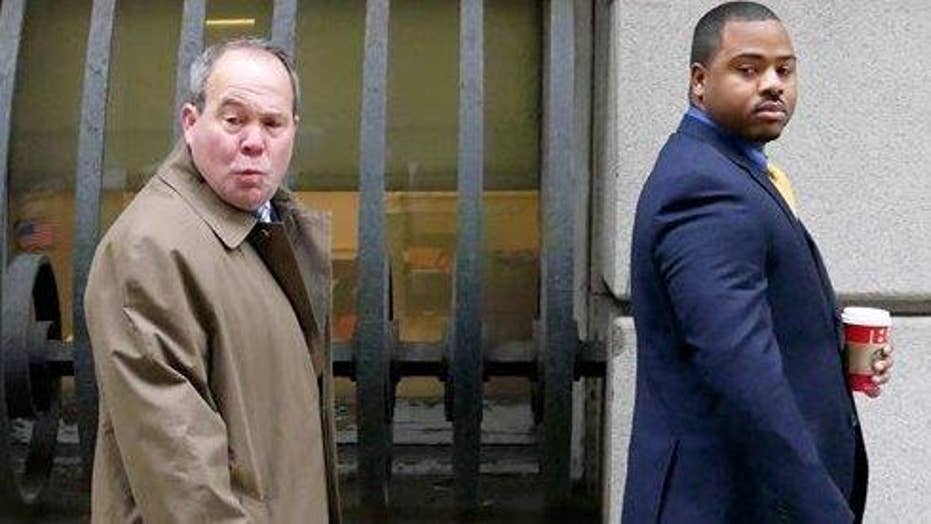 Jury say they are deadlocked, the judge instructs them to keep working. The 'On the Record' legal panel looks at what could be stumping jurors

A Baltimore jury ended its second day of deliberations without a verdict on Tuesday in the manslaughter trial of a police officer charged in the death of Freddie Gray.

The jurors will resume their dicussions Wednesday.

The group went home Tuesday after eight hours of discussions that proved so difficult that at one point in the afternoon, they told Circuit Judge Barry Williams they were deadlocked. He told them to keep deliberating.

It wasn't clear if jurors were stuck on one or more of the four charges.

Gray died April 19, a week after his neck was broken in the back of a police van with his wrists and ankles shackled. Porter is charged with manslaughter, assault, reckless endangerment and misconduct.

Prosecutors say he should have buckled Gray in and called a medic after the 25-year-old man said he needed help. Porter's lawyers say he's not to blame for Gray's death.

The jury had sent out notes asking for computer speakers, water, highlighters, sticky notes and paper. They also requested the clerk's list of exhibits in evidence. The panel spent three hours deliberating Monday.

Earlier Tuesday, the judge denied three requests from the defense, including motions for a mistrial and change of venue. He said the renewed motions were not appropriate at this stage of the officer's trial.

The judge also denied a defense request to ask jurors whether they have seen a letter that the city schools chief sent home with children, warning of consequences for violent responses to the eventual verdict. Defense attorneys had previously called for a mistrial, claiming the prosecution failed to disclose evidence.

Baltimore Schools CEO Gregory Thornton wrote in a letter Monday that schools will facilitate student expression but warned of consequences for "walkouts, vandalism, civil disorder and any form of violence."

Activist group Baltimore Bloc said in a statement Tuesday that students won't allow their "voices to be stifled" and will issue a call to action if the justice system fails. ACLU of Maryland Executive Director Susan Goering says students have a First Amendment right and the letter could end up "chilling legitimate, peaceful protest activity."

Youth clergy and leaders plan the "Youth Stepping Up and Speaking Out" event Tuesday to urge expression "in decency and order" regardless of the verdict.