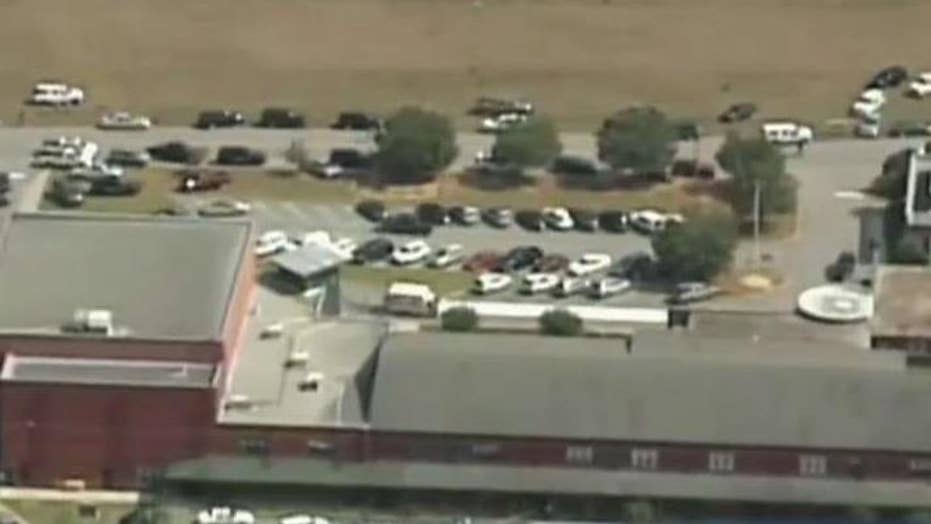 The teen accused of shooting two students and a teacher at a South Carolina elementary school on Wednesday reportedly was expelled from middle school last year for showing up with a hatchet.

A family friend of the suspected shooter told WSPA the 14-year-old was being home-schooled after the hatchet incident.

The alleged shooter had no known connection to Townville Elementary, where he was eventually taken into custody. He had been attending West-Oak Middle School when he was expelled.

The teen, who has not yet been named, never actually made it inside the elementary school on Wednesday afternoon. A volunteer firefighter detained him at a playground outside the building until police arrived.

Townville had practiced active shooter scenarios numerous times during the past several years, CBS News reported. An official said those drills may have prevented additional casualties.

Authorities said the shooting spree began at the teen's house about 2 miles from the school, where he gunned down his 47-year-old father, Jeffrey Osborne.

Crying and upset, the teen called his grandmother's cellphone at 1:44 p.m., Anderson County Coroner Greg Shore said. The grandparents couldn't understand what was going on, so they went to his home just 100 yards away. When they got there, they found Osborne dead and their grandson gone.

About one minute later, authorities received a 911 call from a teacher at Townville.

The shooter drove a truck into the school parking lot and immediately started firing as he got out and moved toward the school, Skipper said. One student was shot in the leg and the other in the foot, sheriff's Capt. Garland Major said. Both students were male. A female teacher was hit in the shoulder.

"We are heartbroken about this senseless act of violence," said Joanne Avery, superintendent of Anderson County School District 4. She canceled classes at the school for the rest of the week.