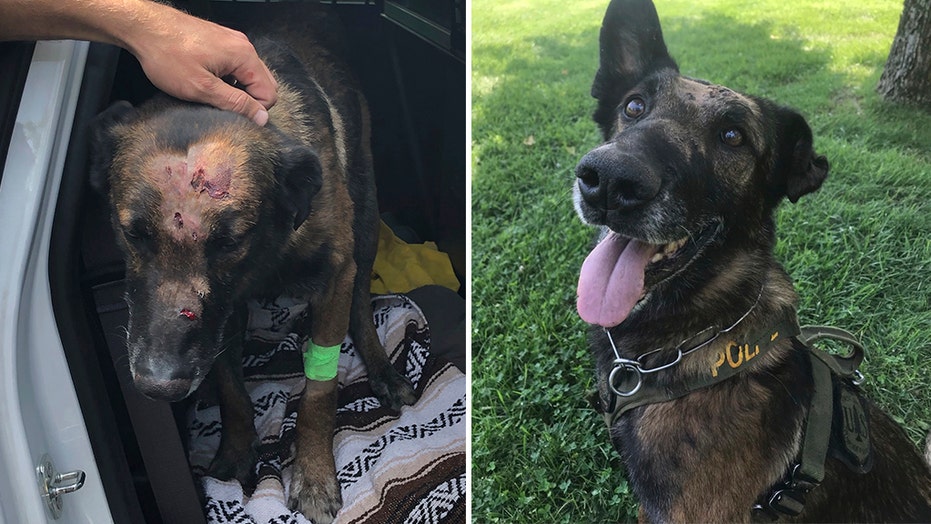 Four years after being stabbed on the job, a hero U.S. Forest Service police dog in California has survived a second on-duty knife attack.

Both times, Ice refused to release his grip on a suspect, despite his knife wounds.

On Aug. 27, the 11-year-old Belgian Malinois was stabbed nine times during a raid on an illegal marijuana growing operation in the Klamath National Forest south of the Oregon border.

A helicopter flew Ice to a veterinary hospital where he was treated for his wounds.

In this Aug. 27, 2020, photo, left, provided by the USDA Forest Service, is a highly decorated U.S. Forest Service police dog named Ice, after he was released from a veterinarian in Medford, Ore. It is the second time the dog recovered after being seriously injured on the job. (USDA Forest Service via AP)

“Thankfully, despite the attack, no major areas were struck, and Ice will quickly recover and return to service until his expected retirement at the end of this month," Cody Wheeler, the Forest Services’ North Zone patrol commander, said in a statement.

In 2016 Ice was critically wounded after being stabbed four times, including twice in the chest, with a five-inch blade during a similar raid in Trinity National Forest.

Ice received the 2016 Law Enforcement and Investigations Director’s Award for Valor and Heroism after surviving that assault. He was also honored then as a “Top Dog” award winner in the international category by American Humane Hero Dogs, appearing in a nationally televised award ceremony in 2017.