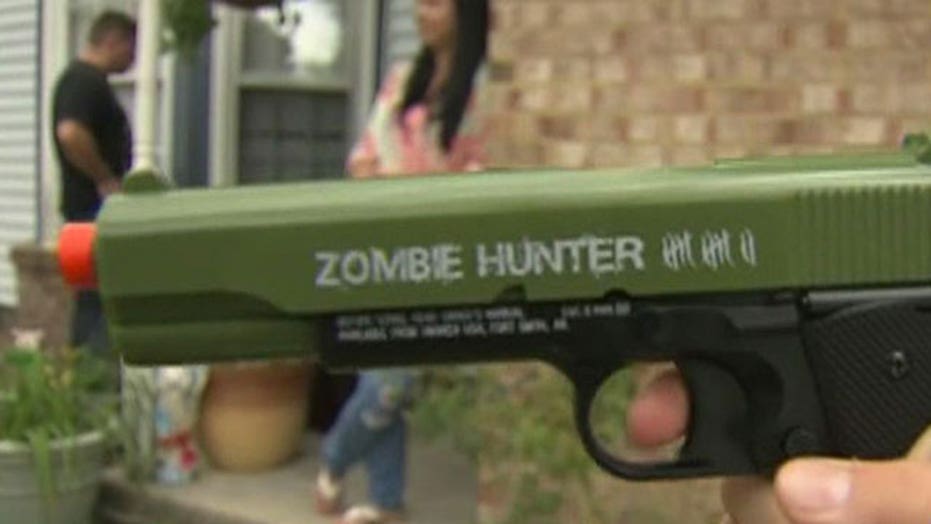 Two seventh-grade students in Virginia Beach, Va., were handed long-term suspensions Tuesday that will last until the end of the school year for playing with an airsoft gun in one of their front yards while waiting for the school bus.

WAVY-TV reports that 13-year-old Khalid Caraballo and Aidan Clark will face an additional hearing in January to determine if they will be expelled for "possession, handling and use of a firearm" because the guns were fired at two others playing in Caraballo's yard.

A neighbor saw Khalid shooting the airsoft gun in his yard and called 911, telling the dispatcher, "He is pointing the gun, and it looks like there's a target in a tree in his front yard," the station reported.

Khalid claims he never took the toy gun to the designated bus stop or Larkspur Middle School, according to the report. Two other students who fired guns were also suspended.

In a letter obtained by WAVY.com, school principal Matthew Delaney found that the "children were firing pellet guns at each other, and at people near the bus stop." Delaney states in the letter that one child "was only 10 feet from the bus stop, and ran from the shots being fired, but was still hit."

The school's so-called "zero-tolerance" policy on guns extends to private property, according to the report.

Khalid's mother, Solangel Caraballo, said it's ridiculous that her son and his friends were suspended because they were firing the airsoft gun on private property.

"My son is my private property. He does not become the school's property until he goes to the bus stop, gets on the bus, and goes to school," Caraballo told the station.

Khalid told WAVY-TV he thinks the punishment is unfair and may hurt his chances of getting into a good college after graduating from high school.

"It's on your school record. The school said I had possession of a firearm. They aren't going to ask me any questions. They are going to think it was a real gun, and I was trying to hurt someone," he said.