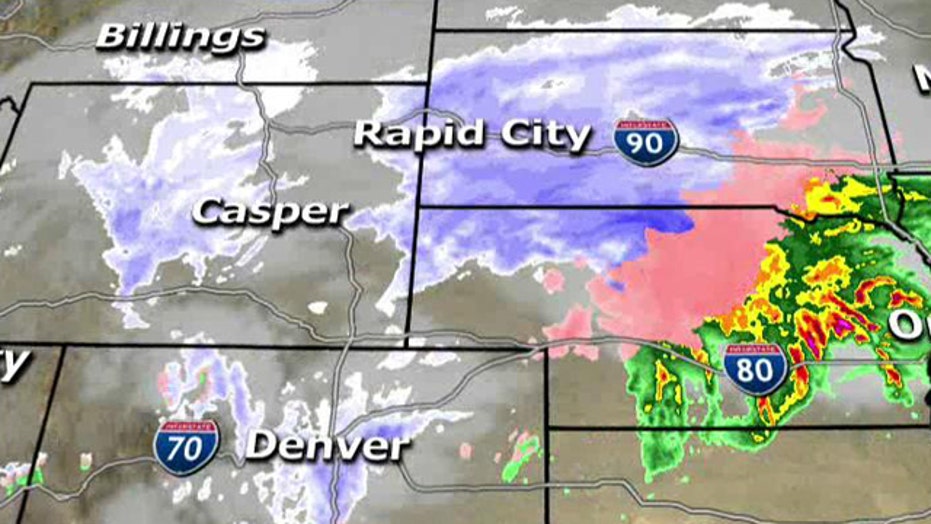 LOS ANGELES – Denver International Airport said Tuesday that at least 465 flights have been cancelled after a storm produced blizzard conditions in parts of the state, where up to 20 inches of snow is expected in some areas.

Strong wind before the snow delayed flights up to 40 minutes Monday night, and some arrivals were diverted to Colorado Springs.

Forecasters predict 6 to 11 inches in Denver and subzero temperatures. Denver Public Schools are closed and Colorado's largest school district, Jeffco Public Schools, was among those canceling classes. in all, almost 200 schools in all have been closed.

Some roads like I-80 in Wyoming has eastbound and westbound closures. Nebraska has also reported 'winter like' driving in some parts of the state. Montana has reports of strong winds mixed with snow.

Northern California was first to feel the lashing blasts of the storm Monday, which spread to the Sacramento and San Joaquin valleys.

At least a dozen trees came down in San Francisco, police officer John Tozzini told KGO-TV, which reported that more than 20,000 utility customers lost power in the region. A swath of outages occurred across the Sacramento Municipal Utility District, the Sacramento Bee reported.

A tree smashed into a Sacramento home where four friends were playing bridge, but they didn't stop playing their game Monday, according to KCRA.

Gusts topped 80 mph at some places in Southern California. The blustery system was being fueled by a cold front.

Whitecaps flecked the Pacific Ocean along the California coast, where gale warnings and small craft advisories were posted. Recreational boaters were warned to stay in port. Wind-driven swells slapped over the tops of breakwaters and turned waves into a churning froth under piers at points such as Redondo Beach and Manhattan Beach on the Los Angeles County coast.

The wind turned small wildfires into big problems in some areas, including a blaze in Fillmore about 50 miles northwest of Los Angeles that burned two homes and forced the evacuation of 84 homes.

Blowing dust forced the closure of state Route 14 in the high desert Antelope Valley north of Los Angeles due to low visibility. Officer Michael Farrell said motorists who stopped on the road were hit from behind by other cars, but no major injuries were reported.

The power went out for more than 13,000 Southern Californians because of the winds and the weather.
The rush of air had an upside: California's main power grid manager, the Independent System Operator, reported that turbines spinning within the ISO grid produced a record of 4,196 megawatts Sunday. The previous record was 3,944 megawatts on March 3.

In Arizona, gusty winds produced by a cold front enveloped Phoenix in a dusty haze and closed 34 miles of Interstate 40 in the northern part of the state for several hours Monday. At least four people were injured in a pileup when two semi-trucks jackknifed in a dust storm on I-10 in southern Arizona. The injuries were not life-threatening.