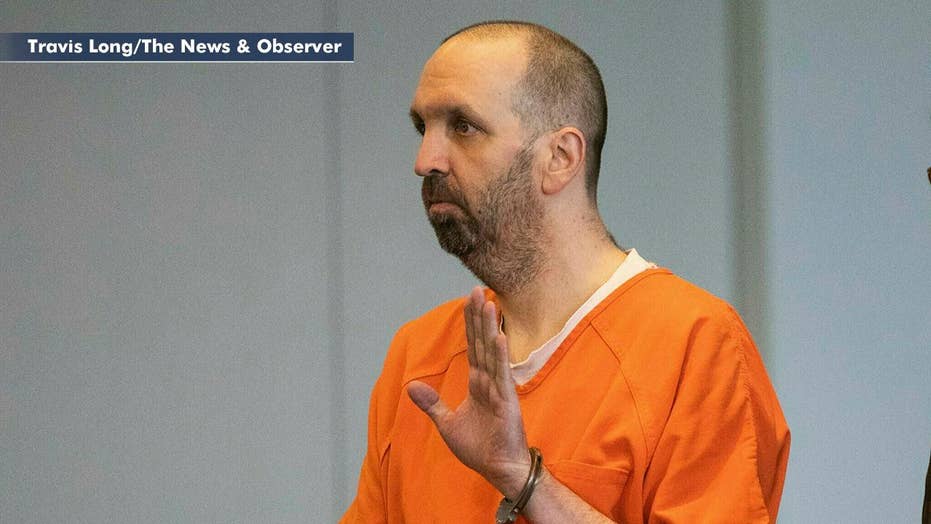 DURHAM, N.C. – Moments after a North Carolina man pleaded guilty to gunning down three Muslim university students, a prosecutor played a cellphone video of the slayings in court Wednesday as one of the victims' relatives fainted, others wept and a man cursed the confessed killer openly.

Craig Stephen Hicks, 50, pleaded guilty to three counts of first-degree murder more than four years after the February 2015 slayings and two months after incoming District Attorney Satana Deberry dropped plans to seek the death penalty in hopes of concluding a case she said had languished too long.

FILE - In a February 2015 file photo, Namee Barakat hugs a female relative during a news conference in Raleigh, N.C., about the death of his son, Deah, his daughter-in-law and her sister. Barakat said the death penalty "would not be enough" for Craig Hicks, the man charged with murdering the three Muslim students. Hicks is expected to enter a plea Wednesday, June 12, 2019, more than four years after the slayings, which the victims’ families blamed on bigotry.(AP Photo/Allen G. Breed, File)

At the time, Chapel Hill police said Hicks claimed he was provoked by competition over parking spaces at the complex where they lived. Relatives said the victims were targeted because they were Muslim, and asked federal authorities to pursue hate-crime charges.

Authorities later indicated they did not have sufficient evidence to successfully prosecute Hicks on hate crime charges, said Joe Cheshire, an attorney for the victims' families. He said officials couldn't overcome Hicks' initial explanation that the violence was provoked by a parking space dispute.

Family members and prosecutors spent most of the two-hour hearing telling the judge that Hicks was motivated by bigotry against non-white people. Hicks showed off a handgun on his hip when he wanted to intimidate his Korean neighbor, a black remodeling worker and his eventual victims, said District Attorney Satana Deberry.

"You played into the hands of the worst of religious people — the fanatics, the radicals — who want to shred this world," Mohammed Abu-Salha, the womens' father, told Hicks in court. The killings were part of growing hatred toward Muslims, he said.

The court was shown a videotaped confession. In it, Hicks told police that after grabbing his gun and extra bullets and pounding on his neighbors' door, he lost control when Barakat cursed him. "I did wrong. I overreacted," Hicks told interrogators.

That account was contradicted by a cellphone video, shown in court, in which Barakat records his own death.

The video rolls as Barakat approaches the door to record the exchange with his often-seething neighbor. He hoped it could be evidence for a legal restraining order to keep him away, Cheshire said.

With the victims' parents and siblings watching, the video showed Hicks complaining Barakat and the Abu-Salha sisters were using three parking spaces. Prosecutors said that wasn't true. When Barakat responded they were using no more spaces than condo rules allow, Hicks responded, "You're going to be disrespectful towards me, I'm going to be disrespectful ..." Hicks pulled a gun from his waist and fired several times.

The phone dropped. The sounds of women screaming can be heard, followed by several more shots. Then silence.

Women wept openly in the courtroom and a young man cursed Hicks. Barakat's older sister, Dr. Suzanne Barakat, fainted. She later appeared at a news conference with family members and an attorney said she was OK.

Hicks said in his confession that after the women fell wounded, he shot both in the head at close range. Autopsy results confirmed his description.

Barakat, a dental student at the University of North Carolina-Chapel Hill, and Yusor Abu-Salha had been married less than two months, and she'd just been accepted to the dental school. Razan had just made the dean's list at North Carolina State University. Barakat and the Abu-Salha sisters had cooked food for the homeless, worked to improve a poor Raleigh neighborhood and planned a trip to Turkey to help Syrian war refugees, Montgomery-Blinn said.

Prosecutors and family members contrasted the academic and humanitarian work of the slain with Hicks. An ex-wife told prosecutors Hicks was fixated on the 1993 Michael Douglas movie "Falling Down," about a frustrated and unemployed white man who responds to personal and social dysfunction with increasing violence.

Hicks' third marriage was disintegrating and he'd recently quit his job with an auto parts company in anger, Montgomery-Blinn said. Workers there described him as constantly playing computer sniper games, she said.

Former U.S. Attorney Ripley Rand said Wednesday his office hadn't decided whether to pursue hate crime charges against Hicks when he resigned ahead of the incoming Trump administration in 2017. The federal hate crime statute requires attorneys to consider the outcome of the state trial when pursuing such charges, he said. There was "no additional punishment he could have gotten that would have meant anything," Rand said.

Cheshire said the families were not happy with the lack of prosecution.

"It hurt a lot of feelings and it added to the false narrative," he said. "Our government failed this family and our multicultural democracy."