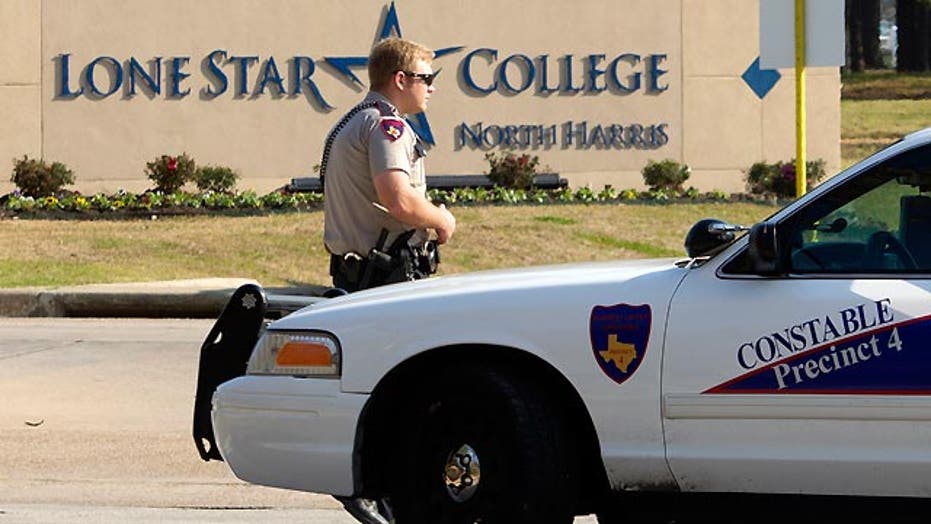 HOUSTON – A 22-year-old man has been charged in the shootings at a Houston-area community college campus that left him and two others wounded.

A statement from the Harris County Sheriff's Office identifies the suspect as Carlton Berry. Spokesman Alan Bernstein says Berry is charged with aggravated assault but remains hospitalized with wounds suffered in the shooting.

Bernstein said no other identities are available.

Investigators say a fight between two people erupted in gunfire Tuesday at a Houston-area community college, catching a maintenance man in the crossfire and leaving students and others cowering in classrooms.

No one was killed, but the volley of gunshots heard just before 1 p.m. sparked fear of another campus massacre less than a month after 26 people were killed at elementary school in Newtown, Conn.

The shooting happened outside between an academic building and the library where Luis Resendiz, 22, was studying on the second floor. An employee called police and then herded the 30 to 40 people in the library into a small room and told them to crouch down, he said.

Keisha Cohn, 27, was in a building about 50 feet away and began running as soon as she heard the shots.

"To stay where I was wasn't an option," said Cohn, who fled to a building that houses computers and study areas. All the students were eventually evacuated, running out of buildings as police officers led them to safety.

Authorities offered no details on what led to the fight. One of the people involved had a student ID, and both people were wounded and hospitalized, Harris County Sheriff's Maj. Armando Tello said. A fourth person also was taken to a hospital for a medical condition, he said.

Mark Zaragosa said he had just come out of an EMT class when he saw two people who were injured and stopped to help them.

"The two people that I took care of had just minor injuries," he told KHOU-TV. "One gentleman had a gunshot to the knee and the (other) actually had an entry wound to the lower buttocks area."

The shooting last month at Sandy Hook Elementary School heightened security concerns at campuses across the country. Resendiz said the Connecticut shooting was the first thing he thought of when he heard gunfire and he wondered if a similar situation was happening on his campus.

"I didn't think something like this could happen. You don't think about it happening to you," he said.

Several school districts in Texas have either implemented or are considering a plan to allow faculty to carry guns on campus. While guns are not allowed on college campuses, the Texas Legislature this year may debate a bill that would allow them.

Richard Carpenter, chancellor of the Lone Star College System, said the campus is a gun-free zone that "has been safe for 40 years."

"We think it's still safe," he added. He described the maintenance man, who was said to be in his 50s and listed in stable condition, as "in good shape."

Daniel Flores, 19, was in a second-floor tutoring lab with about 60 people when he heard a noise that sounded "like someone was kicking a door."

Once he and others realized the sound was gunfire, they fled to the nearby student services center, where authorities kept them for about 30 minutes before letting them go.

Cody Harris, 20, said he was in a classroom with about six or seven other students waiting for a psychology class to start when he heard eight shots. He and other students looked at each other, said "I guess we should get out of here," and fled.

"I was just worried about getting out," Harris said. "I called my grandmother and asked her to pick me up."

Classes are expected to resume Wednesday.