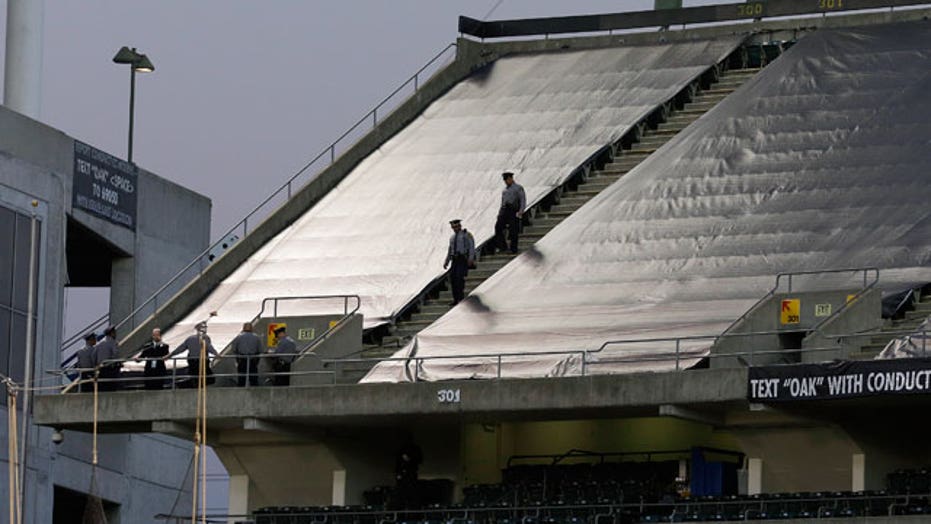 A young woman jumped from the third level of Oakland’s O. co Coliseum after a Raiders game Sunday, injuring herself and a man described as a "Good Samaritan" below who tried to catch her.

KTVU reports the woman, described as being in her 20s, walked to a closed section of the stadium's west upper deck and appeared as if she was going to jump just after the game between the Oakland Raiders and Tennessee Titans ended.

Football spectators on the second level saw her, and attempted to persuade her not to jump, Alameda County sheriff's office spokesman Sgt. J.D. Nelson said.

“She jumped anyhow, and one guy tried to catch her,” Nelson told KTVU.

A spokesman for the stadium described the man as a "Good Samaritan," and said he attempted to break the woman's approximately 45-foot fall.

Nelson told the Oakland Tribune that the woman appeared to be alone when she jumped.

The woman is in “very critical” condition, while the man who tried to catch her is in stable condition. KTVU reports. No identifying information about either individual was immediately available.

The incident Sunday was the latest in a series of falls at NFL stadiums around the country this season.

On the season's opening day, a fan died from a fall off a pedestrian overpass outside Candlestick Park in San Francisco, and two others were injured when a railing collapsed at the Colts game against the Raiders in Indianapolis. Last week, two people were hospitalized when a fan fell off a railing in the upper deck of Ralph Wilson Stadium during a Buffalo Bills game.