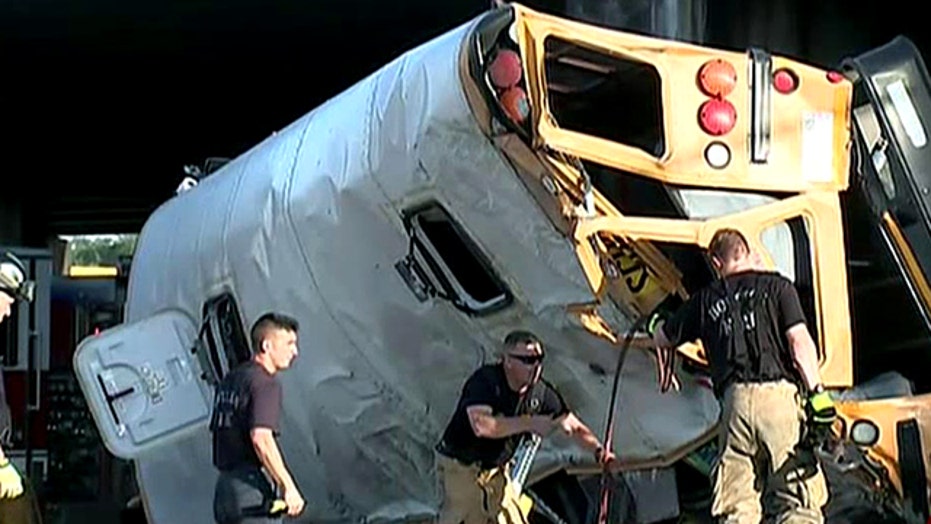 Accident under investigation in Texas

HOUSTON – Two students are dead and three other people are seriously injured after a school bus plunged from a Houston overpass Tuesday morning.

Two other REACH students and the bus driver, Louisa Pacheco, are being treated at an area hospital for unspecified but "serious" injuries.

Furr High School is also the location for REACH.

The bus was carrying the four students and driver and was bound for Furr when it nose dived from an overpass onto the road below at about 7 a.m., witnesses and firefighters at the scene told KHOU.

Investigators said the bus swerved to avoid a Buick LeSabre that had drifted into its lane, KHOU reported. The Buick's driver allegedly told authorities they were trying to avoid another vehicle that appeared to be switching into the Buick's lane.

As the school bus attempted to steer clear of the Buick, it over-corrected and fell from the freeway, investigators said. No charges have been filed yet.

The bus, which last underwent a maintenance inspection in June, was outfitted with lap belts and seven security cameras, HISD officials said. Investigators are reviewing the footage.

Wearing lap belts is optional for students, according to HISD General Manager of Transportation Nathan Graf.

"It's optional because it's difficult for the driver to enforce," said Graf, who added that the bus driver had been with the district for about three years and had a clean driving record.

“We are deeply saddened by this tragedy,” HISD Superintendent Terry Grier said. “I ask all of the HISD community to join me in praying for all of those involved.”

Houston operates the largest public school district in Texas with about 215,000 students.