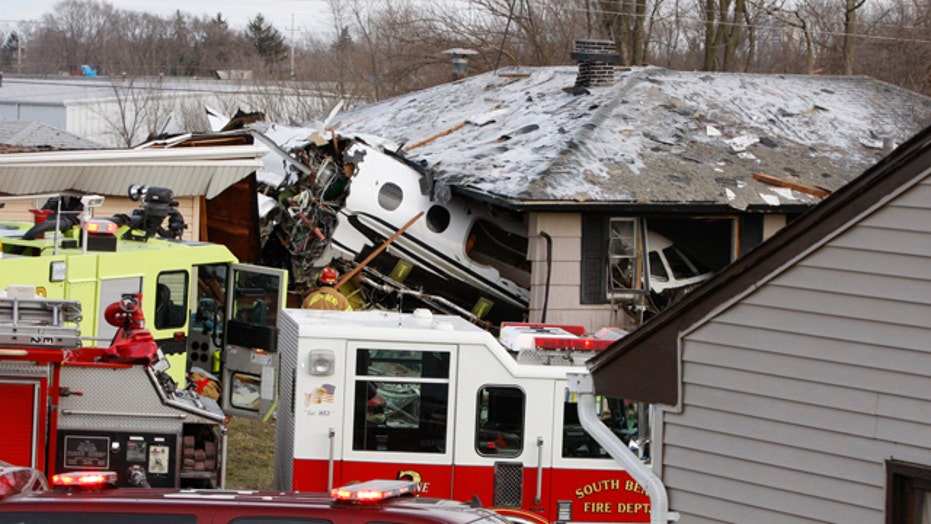 SOUTH BEND, Ind. – A small private aircraft clipped two houses before smashing into a third and snapping in half, killing two people inside the plane and leaking enough jet fuel to force the evacuation of nearby homes in a northern Indiana neighborhood, authorities said.

The front part of the fuselage of the Beechcraft Premier I twin-jet sat wedged inside the one-story home just southwest of the South Bend Regional Airport where the pilot had tried to land the plane Sunday afternoon minutes before the crash.

Two people on board the plane survived and they, along with one person on the ground, were taken to a hospital, South Bend Assistant Fire Chief John Corthier said. South Bend Memorial Hospital spokeswoman Maggie Scroope said one was in serious condition late Sunday and the other two were fair. The hospital could not provide an update on their conditions early Monday.

Authorities evacuated and cut the power to several homes in the neighborhood after fuel leaked from the jet's engine into the basement of the home creating a "very dangerous" situation, Corthier said. Everyone in the neighborhood has been accounted for, he said.

One neighbor described her terror as the plane bore down on her home.

"I was looking out my picture window," said Mary Jane Klaybor, who lives across the street from the crash site. "This (plane) was coming straight at my house. I went, 'Huh?' and then there was a big crash, and all the insulation went flying."

She said: "I saw the plane, then I heard the boom."

Authorities have not released the identities of those killed and injured in the crash.

The plane began its journey in Tulsa, Okla. It is registered to 7700 Enterprises in Helena, Mont., which does business in Tulsa as DigiCut Systems and is owned by Wes Caves.

A woman identifying herself as Caves' wife answered the phone at their home Sunday and said, "I think he's dead," before hanging up.

Mike Daigle, executive director of the St. Joseph County Airport Authority, said the plane attempted a landing at the South Bend airport about 4:15 p.m., then went back up and maneuvered south to try another landing, but eight minutes later the airport learned the plane was no longer airborne.

He provided no information to indicate if the pilot communicated to the control tower that the plane was experiencing mechanical trouble or any other potential cause for the crash. Daigle said Monday he has no firsthand knowledge about what caused the plane to crash.

National Transportation Safety Board investigator Todd Fox arrived at the scene late Sunday. He said his agency will be looking for the cause of the crash and "to identify and remedy any issues that could have prevented this accident."