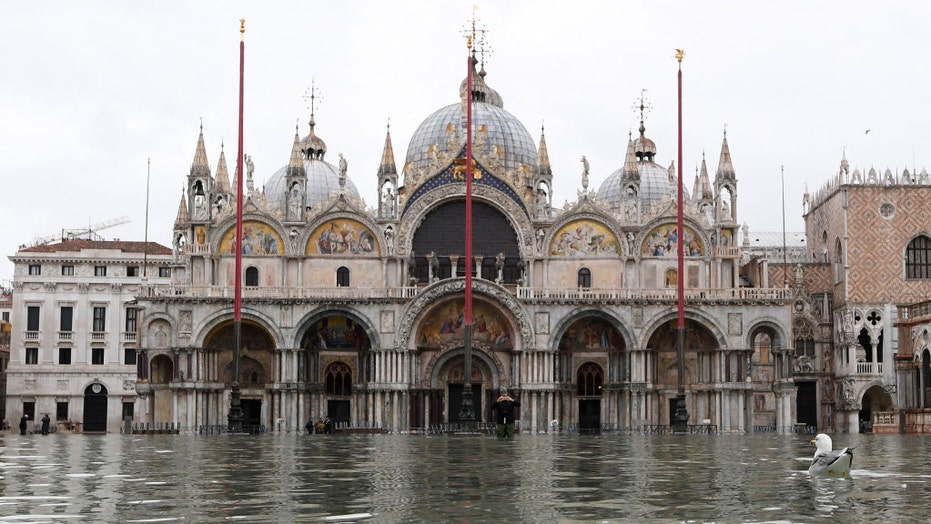 Officials in the city of Venice have proposed a plan to build a meter-high glass wall around St. Mark’s Basilica to prevent future flooding from damaging the 11th century building and the crypt beneath it.

The historic basilica, which sits at one of the lowest points of the city, is still suffering the effects of record flooding in November 2019, when the waters entered the crypt, damaged mosaics and exposed the artwork and the building itself to saltwater corrosion.

"Venice is on its knees," Mayor Luigi Brugnaro said on Twitter at the time. "St. Mark's Basilica has sustained serious damage like the entire city and its islands."

Saint Mark's Basilica was flooded in mid-November. The adjacent piazza was also submerged in three feet of water. (Photo by Elisa Lingria/Xinhua via Getty Images)

Officials with the basilica now say they believe a glass wall would stop future floodwaters from reaching the basilica — and stop history from repeating itself.

“The barrier is essential and feasible and we aim to get in place by November, when we fear that high water will return,” said Pierpaolo Campostrini, a basilica official, according to The Times of London.

As proposed, the glass partitions would stand at just over a meter, and extend for about 150 meters around the perimeter, at a distance of about two meters away from the basilica itself. Much of the glass wall would also replace iron railings that are already in place to keep tourists from getting too close to the façade, Campostrini told Rome’s La Repubblica.

Campostrini added that engineers with the Stazione Sperimentale del Vetro (Experimental Station for Glass) have already consulted on the type of glass needed to withstand flooding.

Footbridges were set up for pedestrians in Venice following the record flooding in November. (Miguel Medina/AFP via Getty Images)

The project is expected to cost around 3.5 million euro, or $3.84 million.

“The project is detailed and convincing for us, and we look forward to hearing the opinion of the institutions now, to discuss and perhaps make the suggested changes,” Campostrini said, per La Repubblica.

In 2021, the city also hopes to finally implement its Mose project, a large-scale system for preventing the flooding of the city via large barriers that would protect off the Venetian Lagoon from tidal surges like the one seen in November.

Campostrini said, however, that the glass walls would still be necessary, as Venetian officials would only activate the Mose barriers when the flooding reaches a height of 110 centimeters — or 25 centimeters higher than the level at which the crypt begins flooding.

The proposal is currently awaiting approval from the city's cultural affairs office.

Back in November, the Piazza San Marco, directly adjacent to the basilica, was submerged in more than three feet of water. The adjacent Saint Mark’s Basilica was flooded for the sixth time in 1,200 years — but the fourth in the last 20, according to Reuters.

That month the tourist mecca was inundated by the second-highest levels of flooding ever recorded, following a flood in 1966.