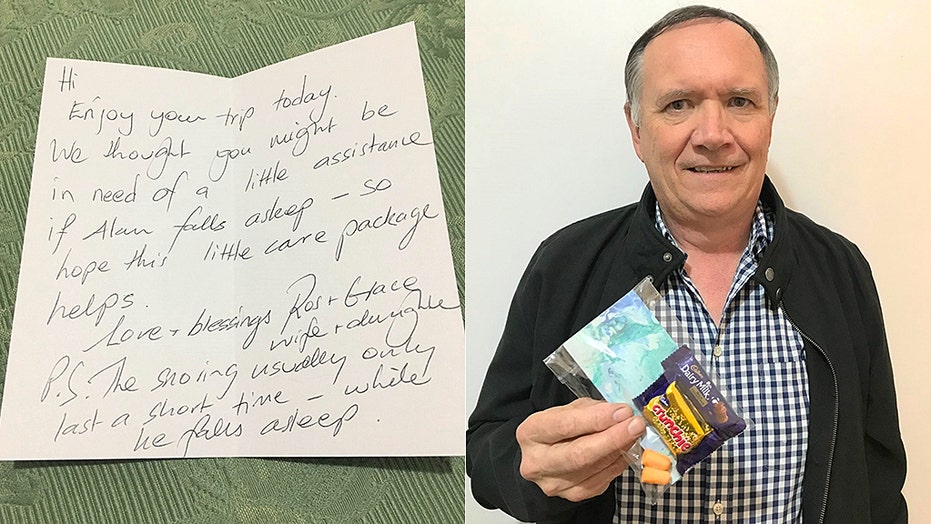 What a thoughtful and not-at-all insulting gesture.

A 17-year-old from Australia recently decided that her stepfather’s snoring was so bad, he should be handing out care packages — complete with handwritten notes — to his fellow passengers on a 32-hour flight.

Last month, Alan Tattersall, from Victoria, Australia, was preparing to head to Houston for business when his stepdaughter, Grace, got the idea, The Mirror reports. Just a few days before the trip, Grace took note of her stepfather’s “pretty serious” snoring problem, and felt badly for any poor soul unlucky enough to wind up sitting next to Tattersall on the plane.

"I'd heard of moms giving out little care packages when they have babies on planes — acknowledging that their infants might be crying,” Grace explained.

Alan Tattersall holds a care package made for him by his wife and stepdaughter. The little packages also contained notes for his fellow airline passengers. (Kennedy News and Media)

Together with the help of Tattersall’s wife, Ros, and a friend, Grace went out and purchased chocolates and earplugs, and sealed up 10 tiny care packages for Tattersall to hand out on the plane.

Along with the offerings, Grace and Ros included notes preemptively apologizing for Tattersall’s snoring.

“Enjoy your trip today,” begins a note included with the care package. “We thought you might be in need of a little assistance if Alan falls asleep.” (Kennedy News and Media)

“Enjoy your trip today,” the note begins. “We thought you might be in need of a little assistance if Alan falls asleep — so hope this little care package helps.”

“P.S.: The snoring usually only lasts a short time — while he falls asleep.”

Tattersall himself had no idea Grace and Ros were preparing the bags until they accompanied him to the Melbourne airport for his trip, at which point they handed them over and told him to pass them out.

Tattersall initially said he thought his snoring problem wasn't so bad — until his family convinced him otherwise. (Kennedy News and Media)

Tattersall did as he was told – or at least he attempted to. The 62-year-old said most people were too preoccupied listening to their own headphones to really care. He added that the care packages came in handier on the return trip anyway — he handed some out prior to the flight — and the message made one woman “chuckle.”

“The others just thought it was strange and didn’t even know what to say,” he said.