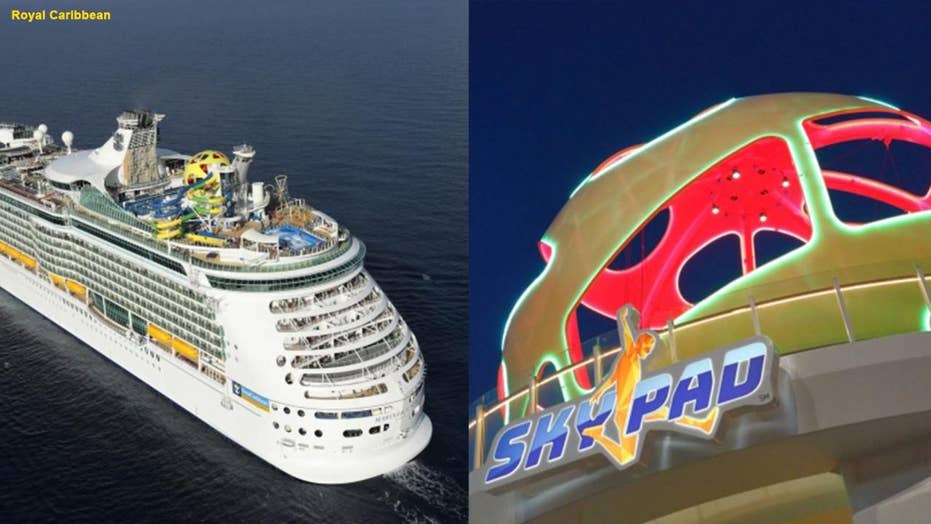 A Washington man has reportedly suffered permanent injuries and a disability as a result of falling from the Sky Pad bungee trampoline aboard Royal Caribbean’s Mariner of the Seas ship. The man is now suing the cruise line for $10 million.

Royal Caribbean passengers traveling aboard the Independence of the Seas and Mariner of the Seas will not be able to jump and soar on the Sky Pad bungee trampoline, as reps for the cruise line have “temporarily” closed the attraction.

Royal Caribbean officials are currently reviewing the feature following a $10 million injury lawsuit filed in March by a Mariner of the Seas passenger, who broke his pelvis in a 20-foot fall from the Sky Pad, reportedly suffering permanent injuries.

Holladay is said to have suffered "a disability and permanent injuries" as consequence of the event, as per reports. (Royal Caribbean)

In recent days, reps for the cruise line have responded to various inquiries from Twitter users and confirmed that the attraction, indeed, will be temporarily closed, the Miami Herald reported.

“We're currently conducting a review as the safety as part of our commitment to safety for all of our guests. I'm very sorry for any disappointment this has caused,” one official wrote online.

It remains unclear at this time just how long the Sky Pad will be closed.

When contacted for comment, Owen Torres, Royal Caribbean International's corporate communications director, told Fox News that the Sky Pad has been taken out of service to “conduct further inspection” as a safety measure.

As noted by the South Florida Sun-Sentinel, there is also a Sky Pad trampoline on the Spectrum of the Seas ship, but Royal Caribbean has not yet addressed whether or not the attraction remains open on that vessel.

The 25-year-old man had looked forward the "awesome experience" of trying the Sky Pad attraction (pictured) during the cruise, which he took with his girlfriend, but never could have predicted that he would suffer such devastating injuries. (Royal Caribbean)

Brett Rivkind, Holladay’s attorney, confirmed to Fox News on April 10 that his client is suing the cruise line company for $10 million, and gave the following statement on the news of the Sky Pad’s provisional closure:

“It is obvious they have finally recognized the sky pad is unsafe and Royal Caribbean Cruise Line must do the proper safety analysis and risk assessment that should [have] been performed before launching this activity on their ships,” Rivkind said, via email. “Casey is angry and sad he had to be one of the motivating factors for this to happen.”

“It comes too late for him, but hopefully it will save others from serious injury and possibly even death.” the maritime lawyer continued. “I have said many times the cruise ship companies rush to put more and more shipboard activities on their ships that are dangerous and do so without the proper risk assessments and qualifications to assure they are safe for passengers.”

“No one is inspecting and certifying these attractions on cruise ships. This is a major safety concern,” Rivkind alleged.

On March 12, Holladay filed suit against the Miami-based Royal Caribbean for negligence in relation to the incident, which occurred during a cruise in early February. According to NBC 6, the 25-year-old Washington man had looked forward the "awesome experience" of trying the Sky Pad attraction during the tropical cruise, which he took with his girlfriend.

Billed as an "out-of-this-world bungee trampoline experience," Sky Pad adventurers strap into a harness that features bungee cords on each side to jump and bounce, according to its official web page. Soon after Holladay strapped into the attraction and soared upwards, his harness unexpectedly “snapped 20 feet above the ground,” plummeting him to hit the hard surface of the ground next to the trampoline, Business Insider reported.

"I just felt the momentum release from my body that I wasn’t being held by anything anymore. When I hit all I really remember is the hit and the noise and the fear,” Holladay told NBC. "It's kind of one of those cliché moments when your life changes in the blink of an eye.”

The cruise line shortened the trip to bring the man back to Miami, where he spent nine days in the hospital, undergoing multiple surgeries for his broken pelvis and receiving treatment for his dislocated shoulder.

Holladay is said to have suffered "a disability and permanent injuries" as a consequence of the event. He is now in physical therapy and seeing a psychologist for depression in relation to the accident, The Sun-Sentinel reports.