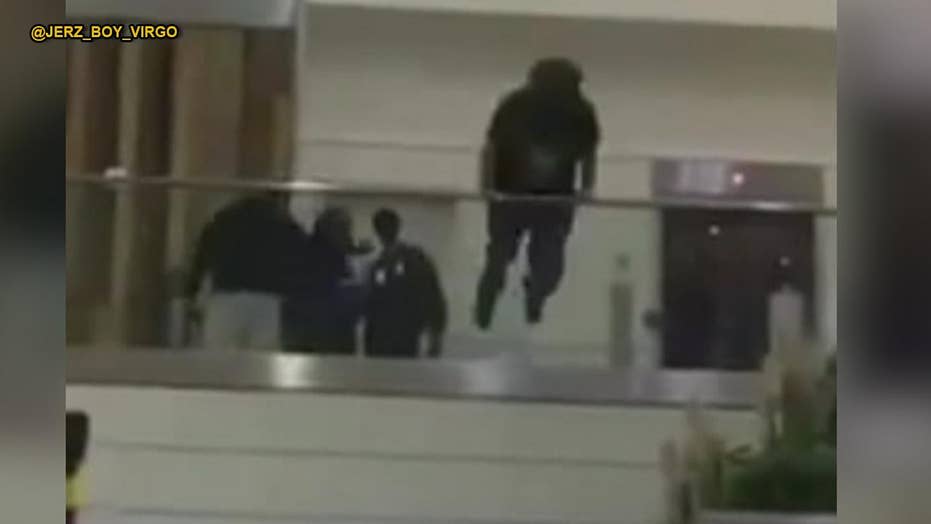 A man who launched himself off a second-floor walkway at Atlanta's Hartsfield-Jackson International Airport is said to have sustained serious injuries during the harrowing fall.

A man who launched himself off a second-floor walkway at Atlanta’s Hartsfield-Jackson International Airport is said to have sustained serious injuries during the harrowing fall.

The man, who was filmed falling by travelers in the concourse below, was said to be arguing with a fellow passenger near the Terrapin Tap Room on the second level of concourse D, WXIA-TV reports. He was also becoming “visibly irate and belligerent,” according to Reese McCranie, the communications director for the airport.

Airport officials had just arrived on the scene when the traveler launched himself over the railing. (@Jerz_Boy_Virgo)

A spokesman for the Atlanta police said the man appeared to be intoxicated. (@Jerz_Boy_Virgo)

A spokesman for the Atlanta police added that the man appeared to be intoxicated as he berated other passengers in front of the bar. Airport officials arrived shortly before he jumped.

In footage of the incident posted to social media, the man can be seen telling at an unidentified person before rushing over to the railing. He then vaults himself over the edge, his body striking ledge before slamming into the ground below. Passengers are heard screaming in horror as the man falls to the floor.

A police spokesman said the man was alert and breathing when emergency personnel responded. He was taken to a hospital for what authorities describe as serious injuries, the Associated Press reports.

Police are said to be investigating the incident.