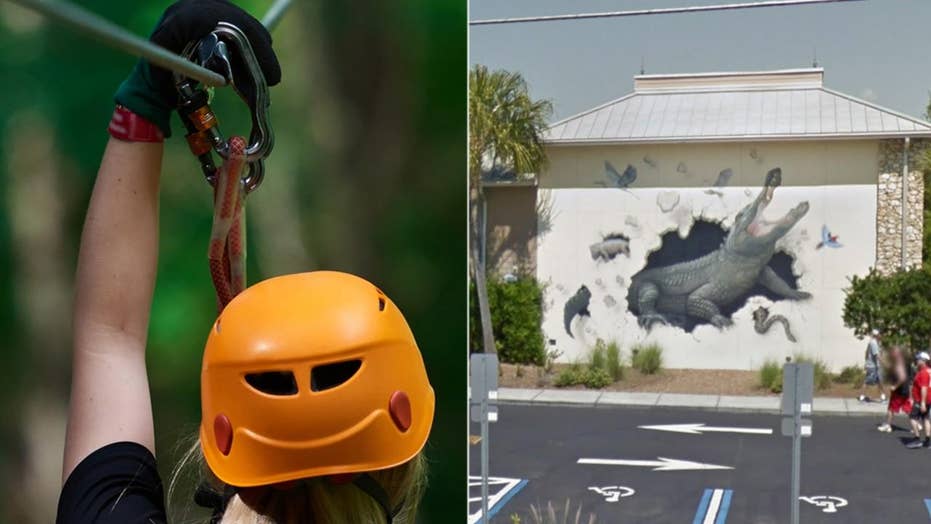 Man and child stuck on zipline above an alligator pit

A man and child visiting Gatorland gets stuck on a zipline above an alligator pool.

A trip to the Gatorland theme park in Orlando turned frightening for a man and child after they became stranded on a zipline 40 feet above a pool of alligators.

Footage of the incident, which was shared to Facebook on Saturday by WESH anchor Stewart Moore, shows the man and boy stuck midway through the ride. The man is also seen cradling the young boy, who is clutching one of the ropes attached to their harnesses.

“You really think you’re having a bad day?” a man can be overheard asking in the footage. “Lemme show you what a real bad day looks like,” he added as the camera panned toward the stranded zipliners.

Additional footage shared by Moore shows the man and boy being reeled back toward the zipline tower, while another photo shows what appears to be a staffer coming to meet them in midair. Moore also confirmed the two ultimately got down safely.

Nick Cahippina, the manager of the zipline ride, has since told WESH that the man and child were not in danger. The site also reported that Cahippina said this type of thing happens “fairly often,” and that employees are trained for these situations specifically.

The manager blamed wind gusts for slowing the riders to a stop, but added that due to the pair’s weight, they were stuck on the zipline for about 10 minutes longer than most stranded riders.

Gatorland also issued a statement on the matter, further explaining the conditions that contributed to the malfunction.

"On Saturday July 7th, the zipline experience at Gatorland stopped midway with a father and child aboard during one of the scheduled rides. This was due to the gravity breaking system that stopped the two riders just short of the landing tower. This happens from time to time based on the weight of the riders and the direction of the wind. At no time was anyone in danger. Our zipline staff is highly trained to handle a variety of possible situations. A zipline staffer on the receiving tower immediately hooked himself on the line and retrieved the two people by pulling them to the landing area," reads the full statement from the theme park.

Gatorland currently boasts two zipline rides at its park, which transport riders over wildlife exhibits including its “Alligator Breeding Marsh” and Cuban and Nile crocodile exhibits.