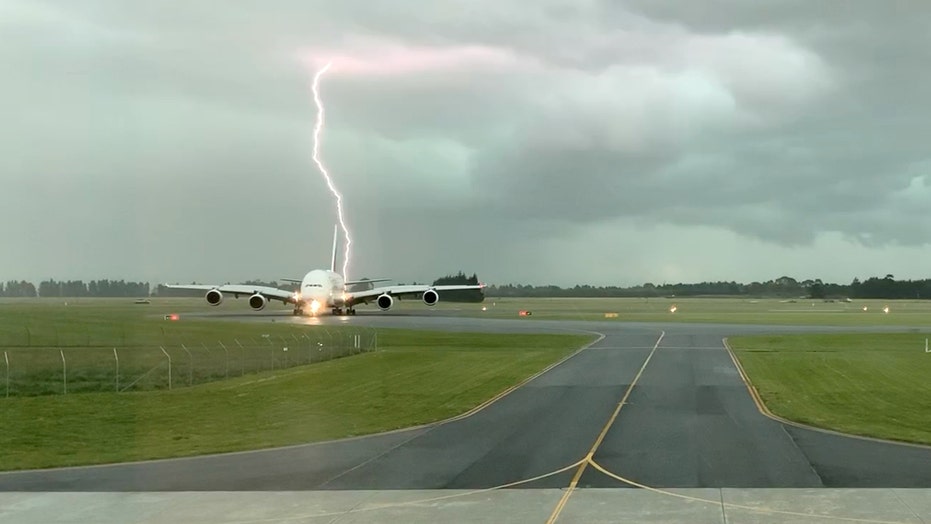 An employee for a helicopter service operating out of a New Zealand airport recently captured a striking image of a lightning bolt hitting the ground behind what’s said to be an Emirates aircraft.

The lightning occurred during storms throughout New Zealand's Canterbury region on Wednesday. (GCH Aviation via Reuters)

“The view out our window onto the tarmac today! The Emirates plane waiting for the storm to pass,” wrote Garden City Helicopters in a Facebook post shared on Wednesday from the Christchurch International Airport.

"The planes were all waiting to unload but couldn't because of the weather,” said Billie Hammett of Garden City Helicopters in a statement to Stuff.co.nz, adding that there were “multiple lightning strikes” during that storm.

Daniel Currie, who captured the moment on camera, claimed it “made for an awesome photo,” too.

Currie’s photograph was reportedly taken on Wednesday, amid heavy storms throughout the entire Canterbury region, which includes Christchurch. In some places, hailstones “the size of eggs” were even raining down, according to local reports cited by the BBC.

Hammett said no one was injured during the lightning strike near the airport,

“Everyone was fine, nothing caught fire, but looks like a close call,” he told Stuff.co.nz.