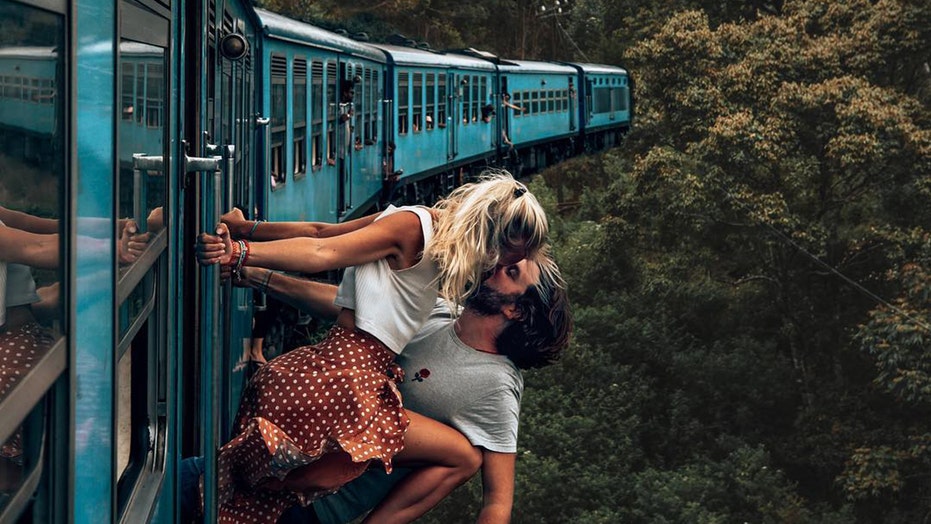 An Instagram couple who received backlash over taking a picture outside of a moving train car has defended the snap, called "stupid" by social media users, as “not dangerous,” claiming they did research to prevent any fatal missteps.

Influencers Jean and Camille, of the BackpackDiariez Instagram handle, were criticized for a photograph showing the couple gripping onto the side of a blue train while leaning out for a risky kiss. The pair were traveling to Ella, Sri Lanka, and allegedly took the picture while the train was moving along a bridge through dense trees.

Influencers Jean and Camille, of the BackpackDiariez Instagram handle, were photographed gripping onto the side of a blue train while leaning out for a risky kiss in Sri Lanka. (BackpackDiariez)

The Brussels-based couple captioned the shot “One of our wildest kisses” and posted it to their shared travel-themed Instagram page.

As soon as the photo, reportedly taken by Jean’s brother, was posted, the couple was slammed on social media for the precarious position.

“Are you really ready to die for a pic ????????” was one comment among many chastising the pair.

However, the couple is speaking out and insisting the photo was not as risky as it seems.

“This train ride is very famous in Sri Lanka, and we had seen many pictures on social media of people hanging out of the doors, so we knew we wanted to try this and prepared for it in advance,” Camille wrote in an email to The Cut.

Camille claims the two researched what time of day and which side of the train to take the picture on before the photo shoot.

“When we took the picture, the train was moving at a walking speed and the edge was not deep at all,” she said. “We would never risk our lives or our health to get a good picture. We care too much for each other for that.”

Camille noted in the email to The Cut that the photo shoot lasted for an hour and Jean’s brother took over 500 photos — though she did not clarify if the train was moving at walking speed during the entire 60 minutes.

Camille and Jean are just one in a long line of influencers getting called out for taking seemingly dangerous shots.

Influencers Raquel and Miguel, from Portugal, were called “irresponsible” by fans for posting a similar daring shot – and video – of them hanging outside of the Sri Lanka train to their 200,000 followers on the social media platform.

The two responded to the criticism with a similar defense, claiming the train was “moving super slow” and said they “respect everyone’s opinions, but it’s not risky.”

Some have also claimed the photos have been Photoshopped, calling the images fake. However, both sets of influencers had uploaded videos of them preparing for the shoots in their Instagram stories, and have not responded that the pictures were in any way doctored.