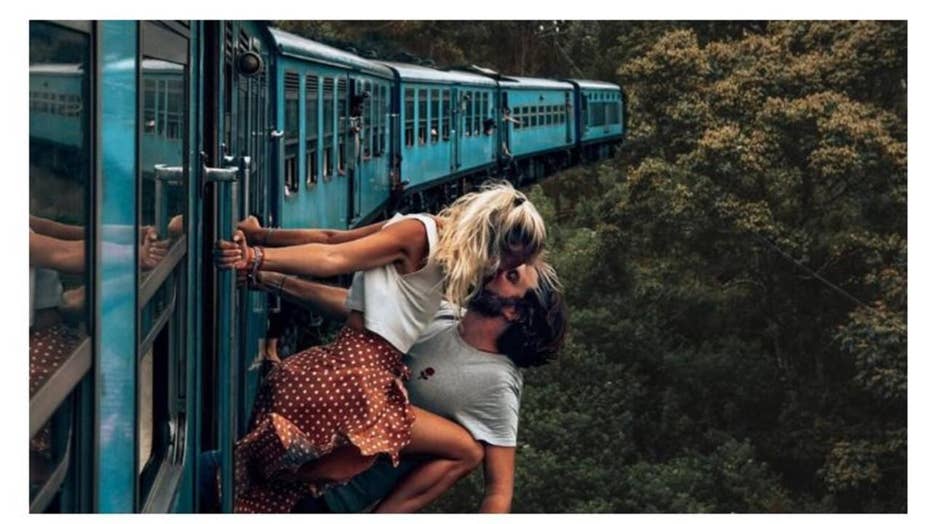 The social media influencers are getting backlash for being photographed gripping onto the side of a moving train while leaning out for a risky kiss.

Another Instagram couple is being chastised for taking a photo outside of a moving train in Sri Lanka.

The influencers, Jean and Camille of the BackpackDiariez Instagram handle, were photographed gripping onto the side of a blue train while leaning out for a risky kiss. The pair were traveling to Ella, Sri Lanka, and allegedly took the picture while the train was moving along a bridge through dense trees.

The Brussels-based couple captioned the shot, “one of our wildest kisses,” and posted it to their shared travel-themed Instagram page last week. (BackpackDiariez Instagram)

The Brussels-based couple captioned the shot, “one of our wildest kisses,” and posted it to their shared travel-themed Instagram page last week.

However, the photo, which has accumulated nearly 40K likes in three days, was quickly ripped apart by fans who were concerned that the Instagram-famous duo was promoting dangerous behaviors.

“And then they wonder why people die by trying to get similar pics...” one person commented on the controversial photo.

“It has nothing to do with wilderness it's pure stupidity, I hope no one will die trying to do the same but if this happens it will be all on you!” another person wrote.

“Blind trust in the handrail, idiots,” another person wrote, noting how the couple was hanging onto the moving train.

“Seeing your other photos, you don't need to risk your lives to get a shot. Not worth it,” another cautioned.

Though the photo did have its fair share of those encouraging the pair’s precarious habits.

Though several questioned if the photo was real or had been Photoshopped.

Camille and Jean’s photo comes less than two months after another Instagram couple was called out for the same shot.

Influencers Raquel and Miguel, from Portugal, posted the daring shot to their 200,000 followers on the social media site — and fans are calling the act “irresponsible." (@Explorerssaurus_ / Instagram)

Influencers Raquel and Miguel, from Portugal, were called “irresponsible” by fans for posting the daring shot -- and video -- to their 200,000 followers on the social media platform.

The two defended the questionable photo, claiming the train was “moving super slow” and said they “respect everyone’s opinions, but it’s not risky.”