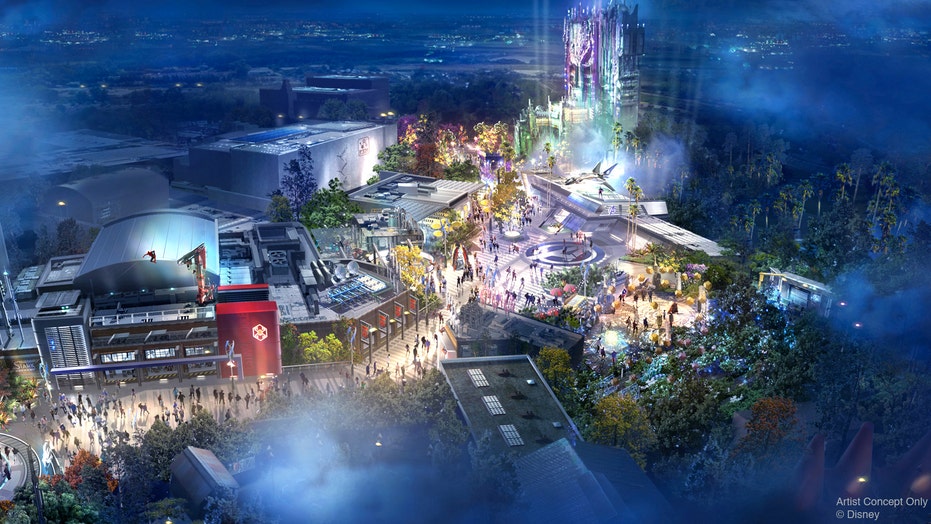 During Disney’s annual D23 Expo in Anaheim, Disney Parks revealed all sorts of upcoming plans for its resorts, but perhaps the most enticing were its intentions for the Avengers-themed area at Disneyland, and its massive, immersive Star Wars hotel at Disneyland.

“We’re so excited, [Chairman of Parks, Experiences and Products] Bob Chapek has announced the name of the land at both Disneyland Resort and Disneyland Paris, which is ‘Avengers Campus,’” said Caroline May, the creative director of Walt Disney Imagineering, during a preview ahead of the first day of the Expo.

DISNEY FANS CALLED ON TO APPLY FOR 2020 'MOMS PANEL'

Previous announcements from Disneyland shared further details of what guests can expect at the Avengers Campuses in both Disneyland and Disneyland Paris, which will be presented as Avengers recruitment areas. At the site, guests can “experience for themselves what it is like to have the abilities of a Super Hero,” according to the Disney Parks Blog.

The Avengers Campuses will be presented as Avengers recruitment areas, where guests can “experience for themselves what it is like to have the abilities of a Super Hero." (Disney)

The in-park Avengers initiative is also said to be spearheaded by Tony Stark himself, who is being aided in developing his “super-powered technology” by the Worldwide Engineering Brigade (WEB) and PYM Technologies.

Disneyland's Avengers Campus is scheduled to open first, in 2020.

Guests over at Disney World weren’t left in the lurch, as Disney Parks revealed details about the immersive hotel experience, wherein guests will be able to temporarily live aboard a starcruiser named The Halcyon.

“This is the starship that guests will get to sleep aboard when they join us for Star Wars: Galactic Starcruiser at Walt Disney World,” explained Ann Morrow Johnson, executive producer and creative director of Walt Disney Imagineering. “Guests will get to spend multiple days living onboard this star cruiser, engaging with characters and having all kinds of exclusive onboard activities.”

The Star Wars: Galactic Starcruiser will invite guests aboard the Halcyon, where they can live out an immersive experience over the course of multiple days. (Disney/Lucasfilm)

Details of when and how much the Galactic Starcruiser experience will cost have yet to be revealed.

Other announcements from D23 included plans for a “transformation” at Epcot, including updated “legacy pieces” and the first-ever “Moana”-inspired attraction, where guests will be able to interact with “living water.”

The current D23 Expo runs through Aug. 25 at the Anaheim Convention Center.