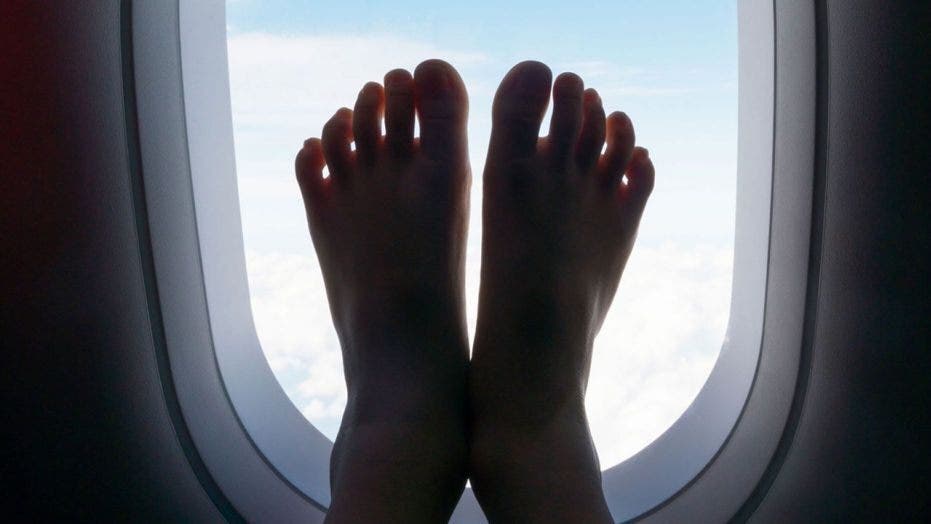 If you’re going to do something questionable to get comfy on a plane, a famous comedian probably isn’t the ideal witness.

Comic and "Conan" sidekick Andy Richter recently took to social media to air his grievances with the nauseating behavior of a fellow passenger during a flight out of New York’s John F. Kennedy International Airport — and his friends and followers are also appalled.

Richter shocked his Twitter audience of 1 million for all the wrong reasons, The Sun reports, sharing images of the male passenger putting his bare feet on the plane’s in-flight entertainment screen. As fellow comedian Nick Kroll pointed out, even a dog flying with one of the passengers appeared aghast.

In his post, which has since gone massively viral with over 56,000 likes and 3,700 shares, Richter said he reported the passenger's bad behavior to a flight attendant, who told the man to put his feet down, to which he obliged.

Just “a few minutes later,” the offender allegedly put his “bare feet” back up near the screen, prompting Richter to order the man to put his feet down yet again.

The wrongdoer was allegedly “shocked” by the orders, and agreed — but his bare feet popped right back up in the elevated position moments after, Richter alleged.

“We had to get off the plane because of lightning and there were dirty toes smudges where his feet were. I am not exaggerating,” the comic added in a follow-up message. “You could see the outline of his big toe, etc.”

Predictably, Twitter commenters were also grossed out by the 52-year-old comedian’s woeful tale.

"Low expectations like this are why @PassengerShame is the new 60 Minutes," one user wrote.

"I’ve been a flight attendant for 31 years. If you find this behavior revolting, you cannot imagine how much worse people can get,” another person claimed. “Andy Richter, if you ever want to write comedy based on commercial flights, please, please let me be a consultant on your project. I’ve got stories."

Others seized the moment to share similar stories of strangers who have gotten too comfortable in public spaces.

“Meanwhile up in first...” writer Dan Savage joked, sharing a photo of a child’s feet in socks also lounging up by an in-flight entertainment screen.

“A woman was [also] doing that in the waiting area of my dentist’s office at my last cleaning,” another claimed. “Some people think the whole world is their living room.”

All queasiness aside, Richter’s saga is hardly the first time that a plane passenger has made headlines for getting toe-tally comfortable on a commercial flight. In June, a four-year-old boy went viral for telling off a woman for putting her bare "stinky feet" on his armrest during a trip in the high skies. Weeks later, in July, another video of an airplane passenger using their feet to operate in-flight screen stunned Twitter users for all the wrong reasons.