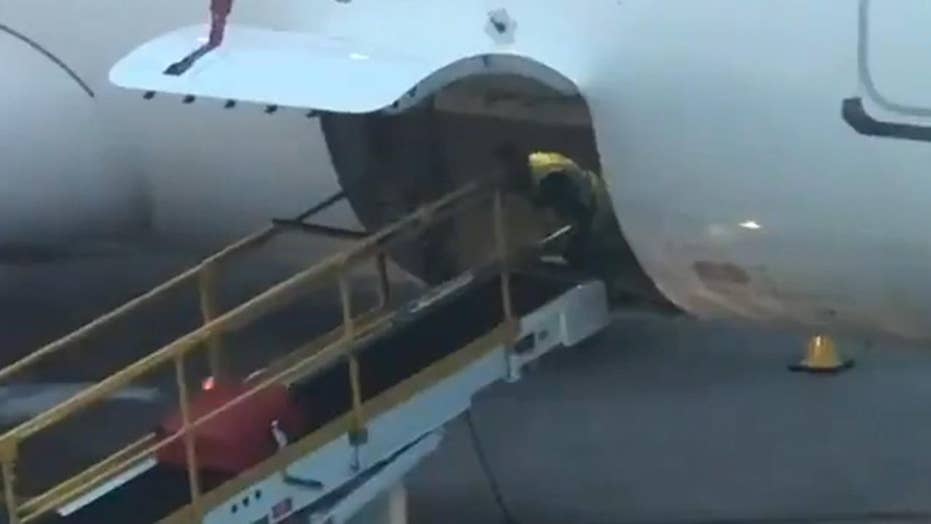 Raw video: As if lifting and transporting luggage all day wasn't enough exercise, a baggage handler at Manchester Airport in England was spotted doing push-ups in the cargo area of jet.

As if lifting and transporting luggage all day wasn’t enough exercise on its own, a baggage handler at an airport in England was spotted doing push-ups in the cargo area of an EasyJet plane.

The fitness-forward employee was captured on camera by a passenger named Andy Lee, who filmed the action from inside Manchester Airport on April 9, The Independent reported.

In the footage, the handler can be seen performing several quick push-ups as large pieces of luggage slowly make their way up the conveyor belt. Passengers can also be heard laughing from inside the departures area, prior to Lee’s flight to Alicante, Spain.

EasyJet, however, seems to think this is no laughing matter. In a statement obtained by Fox News, the airline said it was discussing the incident with its contracted ground-handling service, which employs the handler.

“We are aware of the video and have raised it to our ground handling services supplier at Manchester Airport.”

It is unclear if the handler was violating any rules with the fitness routine.

In the past, however, airport luggage handlers have been caught engaging in other controversial activities, such as tossing luggage, stealing guns from passengers’ bags, falling asleep among the luggage and getting trapped on a flight,