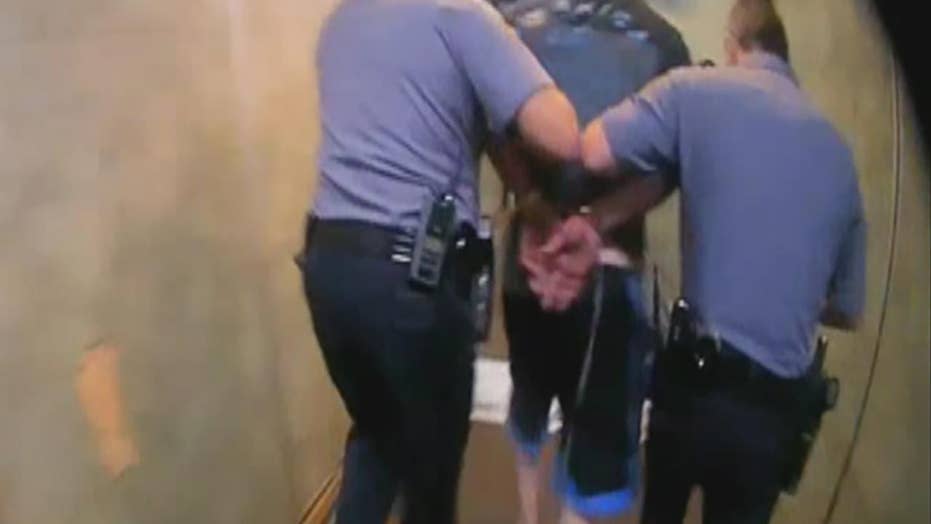 Raw video: A drunken passenger was removed from a plane after flight makes emergency stop in Oklahoma City, Oklahoma. The man is shown being arrested by police for public intoxication.

A Dallas-bound American Airlines flight was diverted to Oklahoma City about 20 minutes before landing at its destination Sunday because of an intoxicated passenger who became so belligerent, passengers applauded when police removed him from the plane.

Brandon Ganus, 32, forced the flight from Pittsburg to Dallas to make an emergency landing at Will Rogers World Airport after he started yelling obscenities and threatening others, according to reports.

According to FOX 25, Ganus had to be physically restrained by crew and passengers with a plastic zip cuff and duct tape.

Once the flight landed, police boarded the plane and removed Ganus from the flight to the applause of the other passengers. In released bodycam video of the incident, police are directed to the man by another passenger saying, “Go get him.”

In the footage, the man is heard slurring his words and asking the police where they are before being escorted off.

"The people on board were doing everything they could to restrain him," said Master Sgt. Gary Knight, with the Oklahoma City Police Department said to KOCO. "He was not cooperating. He repeatedly made threats toward the officers and called them names."

Ganus was arrested and taken out of the airport in a wheelchair after refusing to walk, FOX 25 reported.

In a statement to Fox News, American Airlines confirmed the incident and said the flight departed again for Dallas at 12:24 a.m., about an hour after it landed in Oklahoma City.

“We want to thank our crew, along with some of the customers, who assisted during this situation,” the statement read.