FBN's Cheryl Casone on a plane that skidded off a runway in Sioux Falls, North Dakota.

An Allegiant Air flight skidded off the runway shortly after touching down at Sioux Falls Regional Airport in South Dakota on Sunday.

The incident took place just before noon, after the McDonnell Douglas MD-80 aircraft landed in Sioux Falls from Las Vegas. Krysta Levy, a spokesperson for Allegiant Air, confirmed to Fox News that the plane had skidded about 20 feet off the runway, but remained upright and level, with its front wheels in a patch of grass.

Allegiant Air’s Flight 456 was carrying a total of 161 people, including 155 passengers and six crew members. Passengers disembarked the aircraft via a rear staircase and were escorted the rest of the way to the terminal by bus. Allegiant says no one was injured.

Emergency services were spotted alongside the aircraft following the incident. A spokesperson for Allegiant says no one was injured. (NNS)

Levy said snowfall and rapidly changing weather conditions were to blame for the mishap.

She also confirmed the plane was removed from the runway and grass as of around 7:00 p.m. 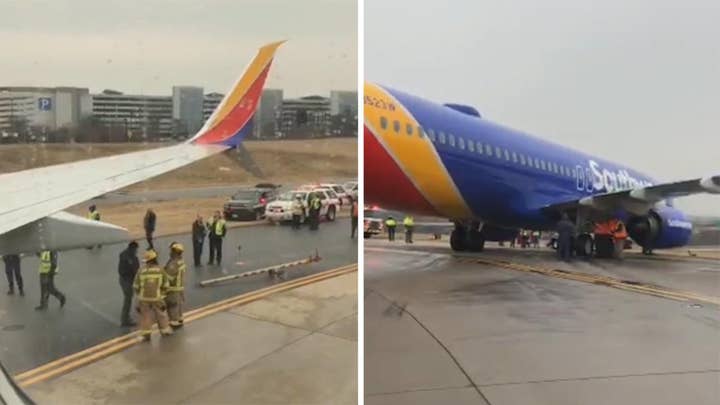 No passenger injuries were recorded as a result of any the above incidents.