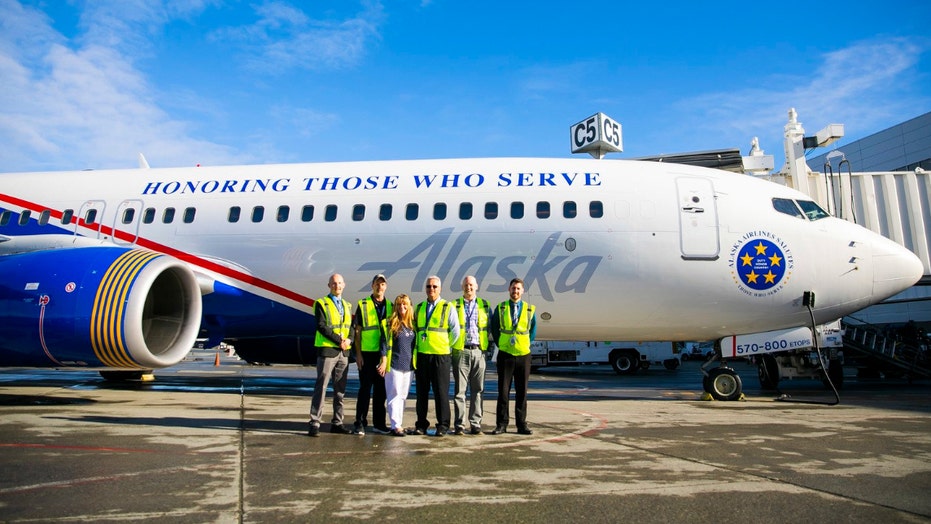 Alaska Airlines has honored a group of veterans with a trip to see the monuments and memorials in D.C. — and even debuted a military-themed plane for the occasion.

Together with the Last Frontier Honor Flight program, Alaska Airlines arranged to fly 23 veterans of the Korean War, the Vietnam War and World War II to the nation’s capital aboard its new “Honoring Those Who Serve” aircraft, which the carrier recently dedicated to all the brave men and women of America’s military and armed forces, along with their families.

Together with the Last Frontier Honor Flight program, Alaska Airlines arranged to fly 23 veterans of the Korean War, the Vietnam War and World War II to the nation’s capital for a tour of their respective war memorials. (Ingrid Barrentine/Alaska Airlines)

The plane itself was unveiled during a ribbon-cutting ceremony on Tuesday, taking off later that day with 23 of Alaska’s esteemed veterans on board.

The aircraft’s paint job accurately reflected the occasion, too, with patriotic flourishes on the wings, an emblem near the front reading “Alaska Airlines salutes those who serve,” and the words “Honoring Those Who Serve” in big, bold letters just above the windows.

“We’re excited to unveil our latest military livery, symbolizing remembrance, pride and appreciation for those who protect our freedom,” the airline wrote, in part, on social media.

The veterans aboard the flight are now spending five days in D.C., touring national monuments and viewing their respective war memorials, the latter of which they’re all doing for the first time. Arriving in D.C. on Wednesday, the group will be given a tour of the memorials and landmarks on Thursday and Friday, before ultimately returning home on May 4, according to The Last Frontier Honor Flight’s official Facebook account.

The Last Frontier Honor Flight, the Alaskan branch of the Honor Flight Network, works to arrange and raise money to thank and honor Alaska’s veterans with trips to Washington, D.C., at no cost.

Alaska Airlines has said the current Honor Flight is the first of two they will be assisting with in 2019.