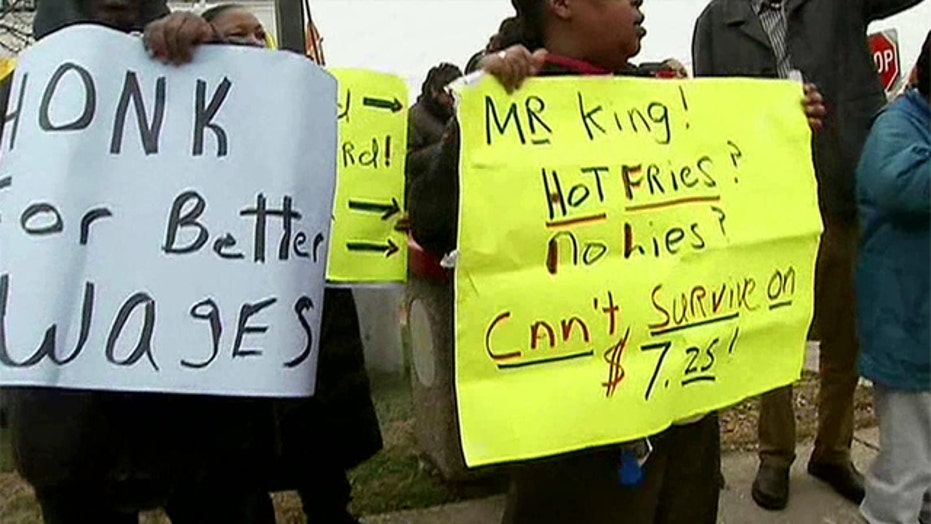 JOHN LAYFIELD: This is the wrong thing to do in an economy that's showing some signs of recovery. They're targeting the wrong people. This is a great union and democratic slogan to say, look at the CEO, how much he's making. You can't raise the minimum wage to $15 an hour? Take McDonald's for example, they will tell you that they don't set the wages for the local franchises. These are your moms and pops, these are your neighbors out there, and they can't afford huge margins to raise the wages to $15 an hour. If you want to help poverty this isn't the way to do it.

BERNARD WHITMAN: There's very little evidence to suggest that a modest increase in the minimum wage has a net job loss. I support the president's call to raise the minimum wage. How can anybody earn a living on $15,000 a year? It doesn't make sense. I don't support a whole sale increase of it to $15; I think that would be too much. Tying the minimum wage to inflation so we don't have to go through this every three, four years, and give people an opportunity to actually live on the minimum wage. What we need to do is tie it to the cost of living; the inflation rate would be the first step to do that.

GARY B. SMITH: From 2007 and 2009, the minimum wage was raised 41 percent and for 16-year-olds to 19-year-olds, the unemployment rate went from 16 percent to 26 percent. The best thing these people can do in order to raise the wage that the McDonald's franchise owners are paying is to simply not take the job. If they don't take the job and other people do take the job, it says there is a market to work for the minimum wage. If everyone stood back and said, no, those are unacceptable, than the franchise owners would have to raise the wage in order to stay in business or simply go out of business. This works against the workers in the long term. It's really just a horrible idea, let the free market work.

JONAS MAX FERRIS: I would think it's going to hurt consumers more than workers. The economy's picking up. Walmart doesn't make enough profits to give everybody a $6 raise across the hour. There are not enough profits there. They're going to pass on the cost. So ultimately this is all going to be paid for by the consumer. The margin won't even change that much at a Walmart. You're going to see McDonald's get rid of the dollar menu, is that a better scenario? It might be. Some people will make higher wages and consumers will have to pay more and buy less. That's what the result is going to be.

TRACY BYRNES: If you go through the payroll cost increases, how do you offset it, if you're not selling more burgers? I don't care that the economy's turning around, people are still struggling. If you don't bring in more revenue, you offset the payroll cost. People who own the place are going to hire less or layoff. People who already have jobs are going to get less hours. That's the bottom line. They're screwing themselves by asking for more money.

POLL: 22 percent OF YOUNG, UNINSURED AMERICANS PLAN TO SIGN UP FOR OBAMACARE

GARY B. SMITH: The whole foundation of ObamaCare is to get the young healthy people to pay higher premiums and subsidize the program for the older ones who really need it. For example, the average 21-year-old is going to see their premium increase about 81 percent. They're going to see catastrophic increases in what they're going to pay. So what are they going to do? They're going to say, look, I'm not going to pay that money. I'm healthy, I'm 21 years old, I'll pay the fine. Then what will happen is ObamaCare is going to say we don't have enough funds, where are they going to get the funds? From the rest of us with increased ObamaCare taxes. It's so inevitable. We'll be having this conversation a year from now.

BERNARD WHITMAN: The fact is, now that young adults are going to be able to get on to the exchanges and find out ways available, what the coverage is like, I think we'll see enrollment numbers increase. Ultimately, we're going to have to wait until March to figure out what the actual numbers are. I encourage parents to talk about health care, talk about the measures, and talk about the benefits.

TRACY BYRNES: Look, 22 percent enrolled. They need a number like 39 percent. Here's how it's going to backfire even further. Part of the new law allows kids 26 and under to go on their parents plan, so you automatically pull those kids out of the pool that's going to help pay for the old people. Our premiums are so going up. Everyone should just plan on it. Put cash under the tree to pay for your health bill.

JONAS MAX FERRIS: They stuck the cost of 55-year-old insurance, which is expensive, on 25-year-olds. Those people aren't going to want to pay for it. It's going to wind up being taxed on somebody else later. Unfortunately, we need them in it. We need 100 percent of the people under 35 on this plan, subsidizing older people.

JOHN LAYFIELD: Let's break this down. Amazon can handle 1 million transactions per minute; this government website can handle 50,000. That's how competent these guys are, these guys are ideologue who know nothing about the business. The American people are not stupid, they understand they've been sold a bill of goods here, they have been told they can keep their doctor, keep their health plan, they know it's not true.

JONAS MAX FERRIS: I like technology but these drones belong in the defense department only. Obama should be controlling them. I can think of nothing scarier than my entire suburban town full of these black suburban birds dropping packages off to the consumers. It needs to be stopped before it gets started.

BERNARD WHITMAN: I think it's a good idea for rural areas, but for cities and suburbs, complete disaster. It's a huge PR attack for Jeff Bezos. He went on "60 minutes" right before Cyber Monday dropping this bomb. Cyber Monday sales for Amazon hit an all-time high, maybe he's using some of that money to jump start this program.

GARY B. SMITH: I think it is good PR to use the money to actually launch it. But I think the idea is idiotic. If I was a kid around a neighborhood with a sling shot, this is my first target as it is flying by.

TRACY BYRNES: I wish this was more than a PR stunt. I think this was Jeff Bezos getting out there; he's thinking forward, he's being an entrepreneur. He's making some noise. I love it.

GARY B. SMITH: OVERNIGHT DELIVERY IS HERE TO STAY! (UPS) DELIVERS A 30 percent PROFIT BY APRIL.

TRACY BYRNES: "STOP WITH THE GAMES!" ALL CONGRESSIONAL STAFF SHOULD ENROLL IN OBAMACARE

JONAS MAX FERRIS: GET ACTIVE THIS HOLIDYA SEASON! (NKE) FUELS UP A 20 percent GAIN IN 1 YR.