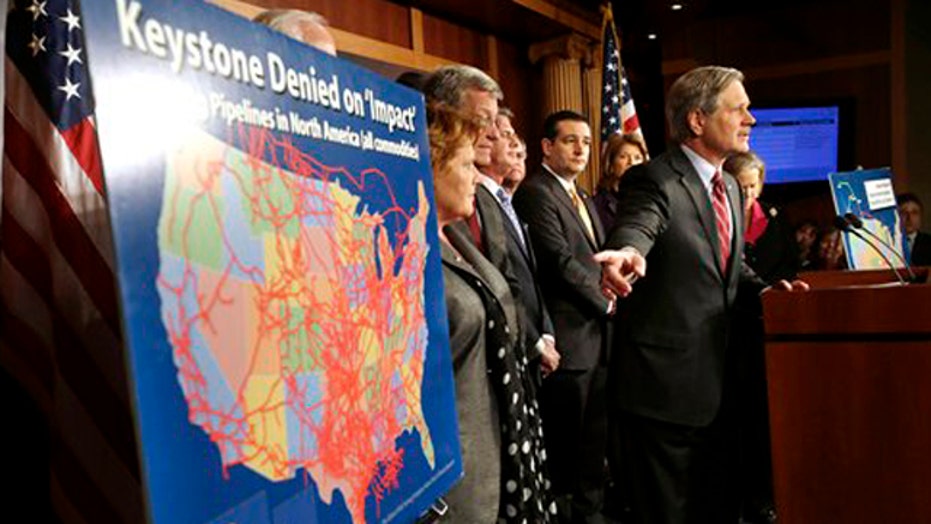 Would Keystone pipeline pump new jobs into the economy?

JOHN LAYFIELD: Absolutely, look at what happened in 1947. We had 5 million Americans on strike and you had the Taft-Hartley act that was enacted despite President Truman's objections. What has limited the power of unions - it led with the returning soldiers to one of the biggest economic booms this country has ever seen. Look, the President just got caught with his hand in the cookie jar. He's been appointing czars, executive orders and going around Congress. Right now we need to worry about jobs. This certainly helps with that. We don't need to worry about unions right now.

CAROLINE HELDMAN: Look at what unions have done for us over the years. They got rid of the sixteen hour work week; they gave us weekends and safer workplace environments.

TOBIN SMITH: This is such a green light. The biggest issue here is that we have a company like Boeing that was building a brand new plant in South Carolina that was stopped because the NLRB somehow deemed that it was not in the best interest of the labor department. That was probably a $2 billion investment that went up in smoke. That's coming back. People put a lot of projects on hold because they didn't know how crazy this NLRB was going to get. With this being changed you're going to see $5 billion to $10 billion plants coming because they can go where they want to be. The lowest percentage of union labor is in the United States and so far we haven't had economic calamity.

GARY B. SMITH: I believe it does because I think it gets to a bigger issue. In Obama's inauguration speech it was all about growing government even bigger than it already is. The problem is that when government grows the private sector suffers. If you say, "Well, who cares where the money goes," the problem is that government growth is always less inefficient then private sector growth. This is one step toward hopefully allowing the private sector to grow and tamping down on unions which I think have hurt many industries despite their higher wages. In a union you have higher wages until you lose your job. I think this is a step forward. It is progress and this is what needs to be done.

JONAS MAX FERRIS: First of all, if this were true the unemployment rate wouldn't be so high right now because union rates are at its all time lowest. They actually create jobs in a bad way because they've lowered the amount of hours you can work. Doesn't that mean the company needs to hire more people? All I know is that companies would rather there not be a labor relations board at all. It is good for profits first and foremost. We have the highest corporate profits right now because labor is in a relatively weak position. Does it automatically lead to more hiring when we don't have unions? Maybe in some cases, but it depends on what the unions are demanding. If they're demanding fewer hours then that would lead to higher employment. I don't care about the job creation. Profit growth will be there and it will stock prices with weak labor. It's good for the stock market.

TOBIN SMITH: Let's remember that if it's a hundred twenty million that they found you have to multiply it by a hundred because that's what's going on. Look, the FedEx guy who comes to your door has more technology in his hands than we have technology for Medicare fraud. What we're having here is a disaster of epic calamitous proportion because we could be saving a hundred and fifty billion if we followed fraud the way we do in the private sector. In the private sector, fraud is about one percent of medical claims. In Medicare, Medicaid and the federal system it's up to ten to twelve percent. This is a classic example where we have 1990's technology to save all this money and the government is twiddling their thumbs.

CAROLINE HELDMAN: I would agree, but Toby, we did just put in a $77 million system and that's why we caught this. This is a new type of fraud so I'm a little more optimistic. When we're talking about undocumented workers we actually make $80,000 on average per worker because two thirds of the twelve million undocumented workers - eight million of them pay social security and they pay income taxes.

JOHN LAYFIELD: This is the silliest argument I've heard. That somehow the illegals have contributed enough that fraud is okay? Come on, give me a break! These guys aren't dealing with entitlements at all. We have $2.4 trillion in mandatory spending every year -- Medicare, Medicaid, Social Security, welfare and interest on the debt. We have $2.4 trillion we bring in revenue every year. We could cut the entire military and the Pentagon and not pay a dime of federal anything and still lose money. We have to deal with these entitlements, but no one in DC is willing to do that.

GARY B. SMITH: Fraud goes on in the private and public sector, but here is the problem. In the private sector there's so much fraud that the company goes out of business and the taxpayer is not at any loss. In the public sector there's no incentive for fraud to go away. People aren't paid on a bottom line. They don't lose their dime if there's more fraud. The only incentive for the public sector is to grow your power base. It's probably a factor of ten to twenty to maybe even fifty with how much fraud is actually going on. It's probably in billions of dollars. No one is losing their job because they figure, "Well, the pie is big and I don't have a profit and loss statement to respond to. Who cares? I'll just grow it and say we need more technology out here!"

JONAS MAX FERRIS: I don't know how little fraud there is in the private sector and yes, taxpayers don't have to pay for it like the government fraud, but every time you go to a store you're paying a slippage premium for all the stuff that's stolen from retailers. Companies try to fight it, but a lot of insurance just pass on the fraud and there's a lot of fraud in health insurance.

GARY B. SMITH: I don't even know why we're talking about this. It adds jobs, it brings more natural resources into our country and it's already been proving to have zero environmental impact. This is a no brainer. The administration is still slow walking this for whatever crazy reason. They need to get off the dime and let the market operate!

CAROLINE HELDMAN: We're talking about 2,000 to 4,000 temporary jobs and it will actually increase the price of gas and diesel in the United States because it will compete with Midwest resources. It has three times the carbon footprint drawn from tar sands rather than regular extraction. The idea that it won't cause environmental damage - you are literally going through a deforesting and putting a pipeline over aquifers - you've got to be kidding me! Of course there's an environmental impact and there is negative economic impact.

TOBIN SMITH: It's not just this pipeline. By getting this pipeline approved we now start the wheels for the twelve other pipelines that we need because to get those pipelines built it we would be a larger export of oil than Saudi Arabia. This technology is being built in the 21st century and the ones that we had problems with were built in the 19th century. This could be five million maybe six million jobs.

JONATHAN LAYFIELD: Yes, it's going to be good for the economy. What Gary B. was talking about is right. This is beyond stupid. There are twenty-five thousand miles of pipeline. They carry all types of hazardous material and we're talking about 250 miles that we're adding to that. To say that all that oil coming down to our refineries is not going to add jobs - that is insane!

JONAS MAX FERRIS: It's a pipeline. The whole idea is that it's an efficient way to move stuff. You want to create jobs the government would make it illegal and say, "Truck the oil down to the gulf," which would be a stupid way to do it. It's dirty Canadian oil. It's not good for the environment. However, we can't stop it from leaving tar sands. The question is. "What's the most energy efficient and environmentally sound way to do it?"