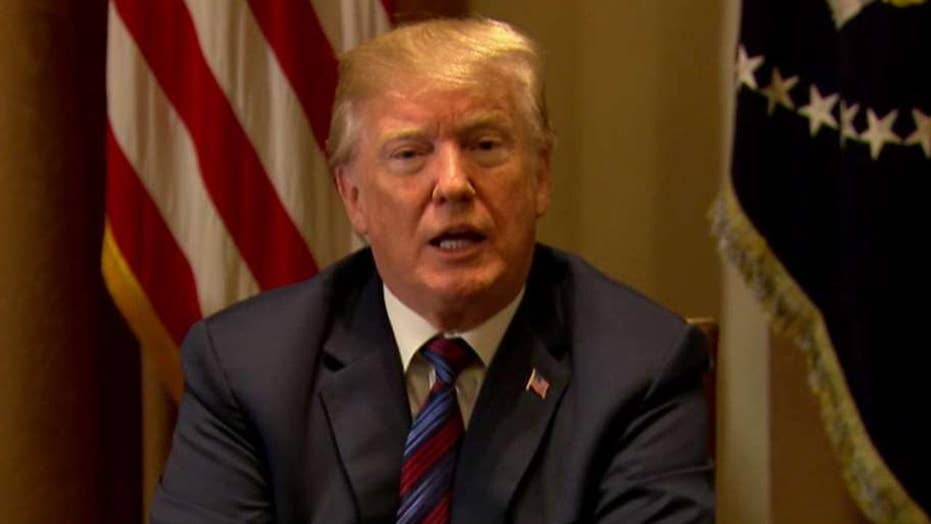 Will Trump pull the trigger on military strike on Assad?

This is a rush transcript from "Special Report with Bret Baier," April 12, 2018. This copy may not be in its final form and may be updated.

PRESIDENT DONALD TRUMP: It's too bad that the world puts us in a position like that, but now we have to make some further decisions. So they will be made fairly soon.

JAMES MATTIS, DEFENSE SECRETARY: We are not going to engage in the civil war itself. And in the worst interest of not just the chemical weapons convention but of civilization itself.

CHRIS WALLACE, ANCHOR: President Trump and Defense Secretary Mattis setting the stage for what looks like an eminent military strike in Syria, but exactly when and how big?

Let's bring in our panel: Steve Hayes of The Weekly Standard; Susan Page from USA Today, and Charles Hurt of The Washington Times. The president, Secretary Mattis and top national security officials all met at the White House today. We are told that Secretary Mattis presented the president with various options. Steve, what are you hearing from your sources about the timing and scope of whatever the U.S. response is going to be?

If you think about where we were eight days ago, the president of the United States had his national security team meeting with him at the White House saying I want to end U.S. involvement in Syria in 48 hours. Everybody out in 48 hours. His team pushed back against that, gave the president other options, suggested that we would see chaos if that's what we tried to do, said that it was impossible but we'd see chaos with a precipitous withdrawal. And just a matter of days later the president is talking publicly about deepening U.S. involvement in Syria in a pretty serious way, and tweeting threats to Russia.

WALLACE: Well, along these lines of a kind of uncertain path, yesterday the president tweeted and we reported on it last night, Russia, get ready. The missiles will be coming. Today he put out this tweet. "Never said when an attack on Syria would take place. Could be very soon or not so soon at all!" And that led to this exchange between the Democratic and Republican leaders in the House.

HOUSE MINORITY LEADER NANCY PELOSI, D-CALIF.: Of course the president says maybe I will, maybe I won't. I will let you know in 24 hours, 48 hours.

SPEAKER OF THE HOUSE OF REPRESENTATIVES PAUL RYAN, R-WIS.: I think you're wrong to suggest that he's dithering. He is being deliberate. And he is going through all the options and he's consulting our allies. That's what you want presidents to do in moments like this.

WALLACE: Susan, I think it's fair to say that the run-up has been bumpy, but isn't the president too far down this road now to call off a military strike whenever it happens?

SUSAN PAGE, USA TODAY: Yes, I think that's right. I think he so clearly has said we will respond militarily to the terrible pictures of the use of chemical weapons that it would be a bigger walk back then President Obama when he decided not to go ahead after Syria crossed his redline with action. And that was something of course Trump was very critical of at the time and has been critical since. So yes, I think he will react.

I think the question is what does he do after the military strikes take place? Does this signal a longer-term commitment unlike what he said last week? And also, does it get us engaged in a real military confrontation with Russia which would have all kinds of perils.

WALLACE: And then there was Defense Secretary Mattis telling a congressional committee today that he intends to see international chemical weapons inspectors arrive in Syria, which is supposed to happen this weekend. And that raises the question of delay, Charlie, because you've got to know. This happened several days ago already. And the president talked about 24 hours, 48 hours. We are well past that deadline already. And while delay, consideration, whatever you want to call it, deliberation is going on, you have got to know the Russians and the Iranians and the Syrians are busy hiding any assets that they think they can hide.

And Donald Trump is in a tough situation because we have been down this path before. We know Trump has sent missiles into Syria for this very infraction before. But it's not what he got elected for. What he got elected, he got elected on a lot of promises to disengage from things like this. And I think it's a real problem for him in terms of the people that support him.

The other thing is we have heard about -- we've heard talk about the helicopter that apparently dropped the poison, the gas, was tracked and that's how we feel fairly certain that it was in fact the Assad regime. But we all remember the slam-dunk thing. We all remember, we don't have the greatest track record of getting involved in these places. And I think when you couple all that together, it raises real questions about whether we should be doing anything over there.

WALLACE: You really have questions about, one, that Assad was responsible, and two --

HURT: I think we've had a pretty bad track record getting involved in things like this. And it is what, and Donald Trump absolutely ran his campaign against this sort of involvement. And I think he has to be careful.

WALLACE: Steve, I have got about a minute. Your response to that.

HAYES: But he also ran his campaign on keeping America safe. I think you're right. Donald Trump clearly ran against military adventurism and even humanitarian intervention which was the justification he used the last time he sent -- we attacked in Syria.

WALLACE: We are going to have to take a break here. I have a feeling we will be talking about this for a few days and potentially into the weekend and week.