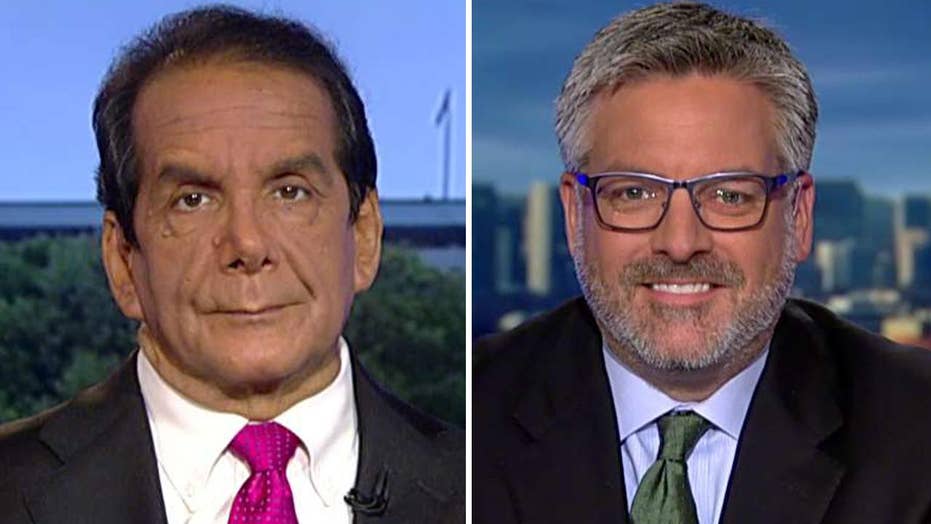 Will Trump give Iran a passing grade for the nuclear deal?

This is a rush transcript from "Special Report with Bret Baier," July 14, 2017. This copy may not be in its final form and may be updated.

THEN-PRESIDENTIAL CANDIDATE DONALD TRUMP: This deal is catastrophic for America, for Israel, and for the whole of the Middle East.

Iran has not lived up to the spirit of the agreement, and they have to do that.

Until the Iranian regime is willing to be a partner for peace, all nations of conscience must work together to isolate.

Instead of saying thank you to the United States, they now feel emboldened. It was a terrible thing for United States to enter that deal. And, believe me, Iran will never have a nuclear weapon. That I can tell you.

NIKKI HALEY, U.S. AMBASSADOR TO THE U.N.: The United States is now taking a comprehensive review of this policy.

BRET BAIER, ANCHOR: Two years ago today, the Obama administration signed the Iran deal in Vienna. Now the Trump administration has until Monday to certify that Iran is living up to their end of the bargain, and it appears that the administration is going to do that, with some caveats.

What about all of that? Let's bring in our panel: Steve Hayes, editor in chief of The Weekly Standard; Charles Hurt, political columnist for The Washington Times; Gillian Turner, former national security council staffer for presidents George W. Bush and Barack Obama, and syndicated columnist Charles Krauthammer.

OK, Gillian, what do you say? Will they certify?

GILLIAN TURNER, FORMER NATIONAL SECURITY COUNCIL STAFFER: On the deal tonight, I think what's going to happen is that the president is in a position now where because he thinks he's going to have to certify this, and not just because -- the reality is Iran probably is living up to the letter of the law if not the spirit of the deal, but the problem here is once the deal like this is in, it's very hard to renege whether in whole or in part. I think the administration is seeing that now after six months in office.

TURNER: Well, continuous throughout the deal. The sanctions relief that it offered them allows them to bring their international energy supplies to the global marketplace. They are going to net somewhere in the neighborhood of half a billion dollars over the next few years from this deal.

But I think the political capital that was invested in bringing Germany and the U.K. and France to the negotiating table is something that we have to stand by. Pulling out of that will be a major betrayal of those countries who support we need right now.

STEVE HAYES, THE WEEKLY STANDARD: If we could argue the standard right now about where this goes next, because I think you are right. We reported yesterday that they are recertifying, that's likely to happen. The president could still change his mind, but before Monday that seems unlikely.

The next step, Senator Corker told Jenna Lifhits on our staff that he had a conversation with Secretary of State Rex Tillerson and Tillerson says they don't exactly want to rip up the Iran deal. They don't want to keep it as it is. They want to add to it. And they want to bring in European countries to toughen sanctions and to put, perhaps, additional sanctions on Iranian behavior. And they want to make the argument a more comprehensive argument so that they are actually dealing with the nature of the Iranian regime, Iranian behavior with respect to terrorism and regional instability, not just the nuclear plan.

I think there are reasons to be skeptical of that. I think it's going to be a very heavy lift. The Europeans are by and large happy with the Iran deal as it is today and are doing commerce with the Iranian at a high clip.

BAIER: Was that the White House coming and saying you have to do something different? How much input did you have in that initial decision?

REX TILLERSON, SECRETARY OF STATE: Well, I was directly engaged in it. I think one of the flaws behind the entire JCPOA process is it seemed to have been carried out to the exclusion of all the other aspects of Iran's behavior as a state sponsor of terrorism, their disruptive behavior throughout the region. The concern was issuing a 90 day statutory requirement indicating compliance on the JCPOA was going to signal that somehow everything was OK with Iran and us, and it is not OK between Iran and us.

BAIER: I'm just going to clear, the JCPOA is the Iran deal. Charles?

CHARLES KRAUTHAMMER, SYNDICATED COLUMNIST: Looked, Tillerson is exactly right that the way the administration structured the deal is completely divorced from all other Iranian actions, the expansion, the terrorism, its attempt to takeover neighboring countries. All of these activities are excluded. Obama did that explicitly. He wanted this to be a pure nuclear deal.

The other element of it is that he very cleverly, as you said earlier, he had all the goodies given up to Iran upfront. And the major one, the one that really counts, was that the world had been able to come after 10 years under our leadership to produce worldwide sanctions regime that was killing the Iranian a company. And that was left and right away. That's the problem. American sanctions on the edge are not going to make any difference. The Europeans have totally lifted the sanctions. The Iranian economy is on the rebound. They are never going to re-impose it. The Russians are going to re-impose it or the Chinese. That is a loss. So there is no point tearing up the deal. The Iranians are going to have the benefits. At least it holds them in some check. The question is what do you do when it runs out in less than a decade? That's what we ought to be thinking about. But revising the deal now is not going to make a dime's worth of difference.

BAIER: Senator Tom Cotton disagrees with you. He says this, that the Iran deal with a foolish mistake from the start. It certainly hasn't improved with age. Tehran has repeatedly violated the terms of the deal by operating too many advanced centrifuges, exceeding limits on heavy water stocks, and refusing to grant inspectors access to nuclear research and military facilities. Continuing sanctions relief for such a recalcitrant regime goes directly against our national interest. The State Department should decline to certify that Iran is in compliance with the JCPOA and hold the regime accountable for its double-dealing. Charlie?

But I do think that Donald Trump has a pretty -- you know, he still lacks a big victory on taxes or Obamacare, obviously. But on the executive action things, he's been pretty good about keeping his word to his supporters, whether it's on trade, or the environment, or immigration, he's been pretty good about pushing through, sticking to even the most controversial promises. So I still sort of have a wait-and-see attitude about whether he eventually does tear this thing up.

BAIER: I mean, the tough part is that it is two separate tracks. It is Iran, the terrorist sponsor, Iran the stirrer of trouble in the region. But this nuclear deal is a separate deal. And to think that these countries are going to redo it seems like a stretch.

HAYES: It does. The administration has undertaken this inner agency Iran policy review, a comprehensive review that's being led by senior officials at the National Security Council, brings in intelligence folks and diplomats and folks from the Pentagon as well. And they want to undo precisely what Charles was talking about. The Obama administration did try to decouple the nuke talks from everything else. And the big change in the Trump administration policy, I think it's a change for the good, is to say it makes no sense to ignore the nature of the regime when you are talking about a nuclear program or talking about terrorism, you're talking about instability in the region.

BAIER: Do they certify on Monday?