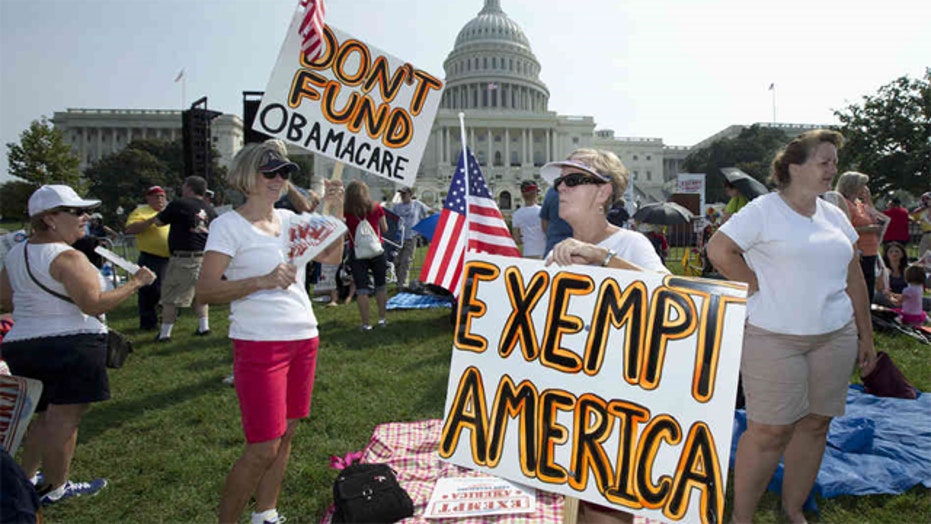 Will taxpayers bail out health care insurers in 2014?

MICHELLE FIELDS: The question isn't whether they're going to get a bailout; they will. The question is how much money they're going to get. A bailout is actually written into the ObamaCare legislation with the "risk corridor" that says that when insurers lose any money the first three years of ObamaCare, taxpayers are going to be the ones who have to pay for those losses. What we're doing with ObamaCare is privatizing profits and socializing losses.

WAYNE ROGERS: They did not put a price tag on it, but I don't necessarily think that's going to be the answer. It could be that we go to a single-payer system. In other words, they throw up their hands and say "none of this works, and as a consequence we're going to have to make all of these bailouts. In other words, we're going to a single-payer system." That will even be worse. the terrible part about this is that it supports this theory that I've always had which is that we're heading toward a fascist government, and when I say a "fascist government" I mean it in economic terms, not political terms. That you have the government in cahoots with major corporations and major unions, and they're dictating what the policy is going to be.

JEHMU GREENE: I think that Charles [Krauthammer] is a smart man, but he is about three and a half years too late because the Affordable Care Act itself-ObamaCare itself-was a bailout to the private insurance companies. They were losing premiums because employers were dropping out from their insurance plans, and this healthcare act pulled millions of people into private health insurance without a countervailing government option. So I actually think the direction that Wayne point out would be a great thing. We do need single-payer in this country, but conservative forces did not allow that to happen.

JONATHAN HOENIG: The president has been deceiving about every element of government-controlled healthcare, which is exactly what this is. You don't have to look too far into our recent history for government bailouts in its controlled health system. We've bailed out state Medicare programs three times in just the last decade. The Highway Trust Fund, Amtrak, the post office, the government-controlled student loan monopoly: every time government gets involved with industry, every time, to Wayne's point, this fascist government starts to get in cahoots with business, there's always a bailout because the rules of supply and demand, of freedom, no longer apply. It's anything goes. It's bailouts, it's benefit cuts, it's the road to serfdom.

13 STATES SET TO HIKE MINIMUM WAGE NEXT WEEK; IMPACT ON JOBS IN QUESTION

JONATHAN HOENIG: Minimum wage hurts jobs, particularly low-skill jobs. It's not my opinion that's what the department of labor said back in 1938 when minimum wage was first enacted. Why? Because wages are not arbitrary. They're not based on whim or feeling. They're actually based, like any price, on the realities of the marketplace, and minimum wage is price fixing. It's destructive, because if an employer has to pay somebody $15 an hour for a job that's only worth $7 or $8 an hour for the job, they're going to go bankrupt or have to reduce their productivity accordingly. It's terrible for the economy.

WAYNE ROGERS: There is competition for jobs just like there is competition for every other product that we do in a free-market system. When you cut that free-market-you made a point earlier about in the healthcare that the insurance companies could not cross state lines. That is why there was no competition among them to bring down the cost. Now if you have competition with labor that will bring down the cost. If you fix that, and you do it by fiat, and you said "oh, everybody is going to get ‘x' dollars," then there is no competition. You're right, those jobs, if they are set in this country or this state or this county or this city, they'll go somewhere else.

JEHMU GREENE: Let's keep in mind those great words from Kris Kringle: "Christmas isn't just a day, it's a frame of mind." That being said, Jonathan had to go to 1938 for his talking points? There is common sense in the fact that if Americans are working hard and playing by the rules, they should be making a livable wage. Working full-time right now on the minimum wage is $15,000.

JONATHAN HOENIG: I don't think it's even competence as much as it's lawlessness. To Michelle's point, all these examples-ObamaCare, IRS, NSA-are government using its guns against innocent American citizens. Government is supposed to protect our rights but this year all that we saw was government essentially using its force against American citizens. That's been a hallmark of Obama's administration, and it's set to continue in 2014, as well.

JEHMU GREENE: At the end of this year there is clearly a lot of work that we have to do to make sure that people understand that government plays a very important role in fixing our societal problems, and the level of incompetence on a number of these issues does have to be addressed, but it doesn't take away from the fact that we cannot solve these problems without the help of government. It's not a left-right thing.

WAYNE ROGERS: I think just the opposite of what Jehmu is saying. You've got to get the government out of this. You can't let the government come in here and try to solve something. They're the same people who made the mess in the first place. With Benghazi we've been lied to by Hillary, but the Secretary of State, by Susan Rice, by all these people who knew the truth and outrageously lied to us. The same is true about ObamaCare. They make it up as they go along. They have no idea what it is. And the NSA spying on us is certainly against the Constitution of the United States.