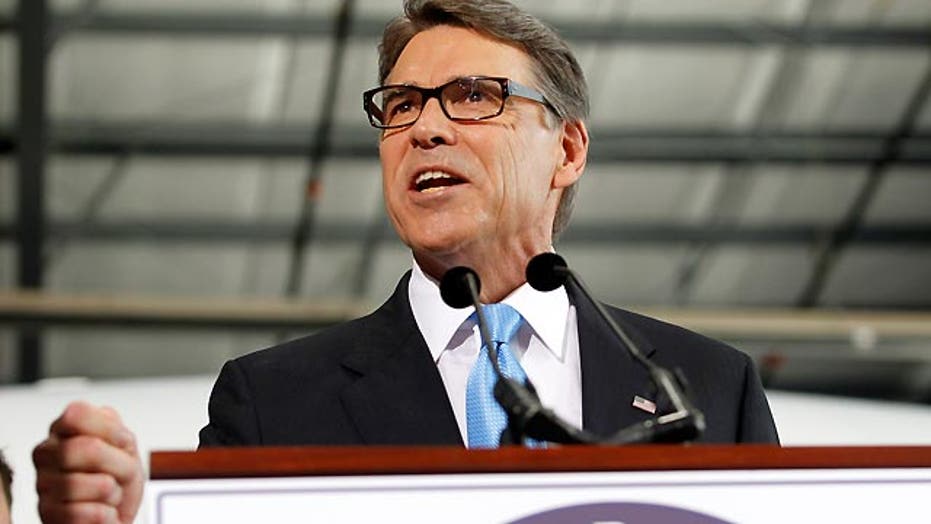 This is a rush transcript from "Special Report," June 4, 2015. This copy may not be in its final form and may be updated.

SEN. MARCO RUBIO, R-FLA.: We never had had a race like this before. And I always tell people as a Republican I'm glad that we have so many good candidates. The Democrats are struggling to come up with one. So I think it's great that we have system good candidates. I believe this field is going to produce the next president, potentially the next vice president, maybe a future president, and cabinet officers. And we're going to have a vibrant, spirited primary where I think competition is going to drive excellence and ultimately give us a stronger nominee.

BRET BAIER, ANCHOR: Senator Marco Rubio one lucky guy today on "Outnumbered"
talking about the field. And he talked a lot about a lot of different things on "Outnumbered." This, today, as the number of candidates increased on the GOP side. Rick Perry getting in at a very hot airplane hangar in Addison, Texas, with a fired up crowd saying he can do it the second time.

We've back with the panel. A.B., can he do it the second time? What does Rick Perry have to do to change the dynamic?

A.B. STODDARD, THE HILL: Well, I think it's hard. He has more executive experience than the other governors he is running against because he served longer. He has been in the military. But he ran last time and built a reputation that he is trying to overcome. I think actually Rick Perry might believe in his heart he would be the best person for the job, but he knows that this process offers you some redemption and offers you a platform and elevates you. I don't think anyone expected Newt Gingrich would win South Carolina, and he is bigger today because of it.

This is just the truth about this process. It invites people in because it's a new chapter. Rick Perry is going to struggle. He has faint support. He has a narrow constituency to get around because there are other social conservatives in the race or other governors in the race, et cetera.

You are looking at a money race that's going to really edge him out.
I don't know how he gets around Scott Walker, Jeb Bush, Marco Rubio, and finds the big bucks. And I just don't see where his support is going to come from long term. So I think it's -- this big field Marco Rubio talks about I actually think is not good ultimately for the party. But I see why each individual person thinks they have the reason to run.

BAIER: Well, Perry, obviously, taps into his time as governor. He also has some financial supporters in Texas who are very -- backing him to the hilt. And, you know, you go to a backyard barbecue in Iowa, and he has done a lot of them, he is pretty good at it.

STEVE HAYES, THE WEEKLY STANDARD: Yes, he's very good, a tremendous retail politician, and he has got an outstanding record as Governor of Texas. As you say though, he spent as much time in the early primary states as anybody has, other than Ted Cruz, 30 trips by a "U.S. News and World Report" count. And yet in Iowa he is at three percent, in New Hampshire he is at 2.5 percent, and South Carolina he is at 2.5 percent. Something is not translating. Is it that people aren't willing to give him that second look? That's possible. He certainly has a good record. I think eventually he will get a second look. The question is whether it will be enough to catapult him back into the first tier.

BAIER: All right, let's take a look at the latest FOX News poll and the breakdown as we have it. Obviously these polls very early and a long way to go, but you can see all the candidates here stacked up, and Bush and Walker kind of leading the pack, and Ben Carson, Dr. Ben Carson who I talked to today, we will have the "Contenders" piece next week, coming in third.

CHARLES KRAUTHAMMER, SYNDICATED COLUMNIST: You also have a poll of people saying who they will not vote for. Do you want to show it?

BAIER: Yes, sure, would never vote for.

KRAUTHAMMER: It's a tremendously interesting poll. It is led by Donald Trump with a deserved 59 percent.

BAIER: You have to add "deserved"?

KRAUTHAMMER: Well, because he is going to say how sad it is that I'm saying these things. But, you know, this is an open forum and we have free speech. Yes, a well-deserved and I would say an impressive 59 percent.

But that's not the most interesting number. I think if you go down to the bottom you find Carson, Rubio, and Walker are the ones with the lowest rejection number. And that I think, is the most important in a race this spread out with it's going to be 15 candidates at a minimum. The people who can show that they would be somebody's second or third choice and they are not anathema I think will be the key.

So I think looking at who is ahead or who is the number one, they are all bunched between 12 percent and about seven percent within the margin of error, so I'm not sure it tells you much. But it tells you a lot if you see who people will never support.

BAIER: I will say Trump is showing up in a lot of polls, and he is.

KRAUTHAMMER: He's showing up at four percent on the last GOP poll.

BAIER: He is going to have an announcement June 16th. Jeb Bush, June 15th with an announcement. And A.B., you look at the numbers, at least early, they are pretty soft for Jeb Bush, especially in these early states.

STODDARD: Jeb Bush was hoping to be the establishment frontrunner, juggernaut. A lot of conventional wisdom I think is going to be tested in 2016, whether or not can you just come in with an operation like his and dominate. He waited to become a candidate this long so he could raise more money as a non-candidate because is he all in on that belief that if he has the best national operation, the most money to go the distance, that he will end up just outlasting everybody else. And we will see if he is right.

KASICH: One of the things that we are deciding is can we have the resources we need to compete, and we're -- I'm very optimistic that we are going to achieve our internal goals.

BAIER: Everything we are hearing is that he is going to get in, Steve.

HAYES: I love the "No hit on Jeb." It was clearly a hit on Jeb.
It's like when Mitch McConnell calls Harry Reid my good friend Harry. They despise each other.

But, look, I think Kasich could actually be a serious player. He's somebody who has not been getting as much attention as some the other candidates. He too has a good record. He won reelection in impressive fashion in 2014. The big question I think about his candidacy is will he be able to make policy arguments without castigating conservatives, without seeming holier than now sometimes in the literal sense?

KRAUTHAMMER: Without saying that Wells Fargo doesn't have Bush money, in other words. I don't think he is capable of that. I think he is extremely attractive, glib, has a good record and a really strong history with experience, but he does have a tongue that's undisciplined, and that could bring him down.

BAIER: We'll have many more panels, I think, about politics. That's it for this panel.