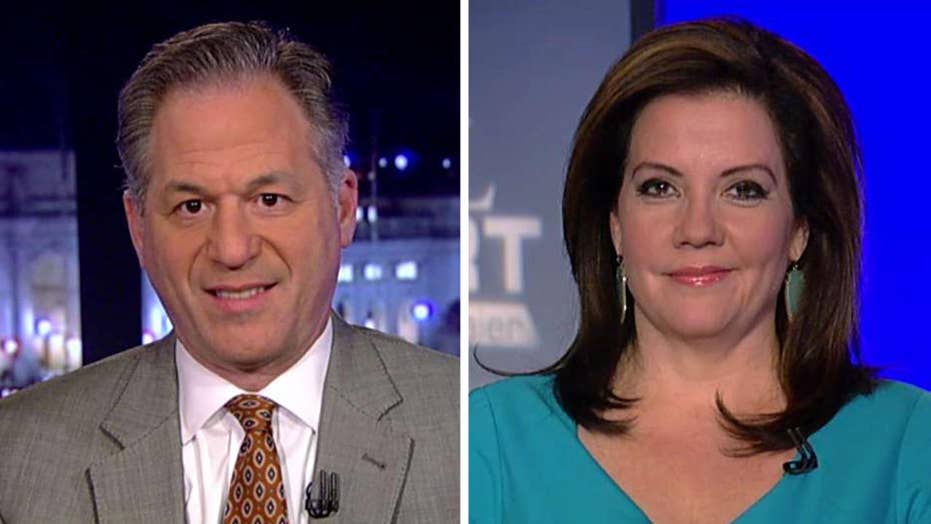 Will release of FISA memo shed light on McCabe resignation?

This is a rush transcript from "Special Report with Bret Baier," January 29, 2018. This copy may not be in its final form and may be updated.

BRET BAIER, FOX NEWS HOST: Ranking member of the House Intelligence Committee Adam Schiff. We wanted to listen to that Q and A. The decision has been made by the committee itself to vote out this memo that was produced by the Republicans on that committee looking at classified material about surveillance during the campaign. Here is just a compilation earlier of some lawmakers whether this memo should be released or not.

REP. BRAD SHERMAN, D—CALIFORNIA: It certainly should be, but somebody should explain how utterly insignificant it is.

REP. TREY GOWDY, R--SOUTH CAROLINA: This memo answers what I think are really legitimate questions, and I do think the FBI should look at it before it is released. So I want to play face up poker.

SEN. LINDSEY GRAHAM, R--SOUTH CAROLINA: No, I don't wanted released yet. I don't. I want somebody who is without a political bias to come in and look at the allegations that I've seen. The way the FBI conducted itself and the Department of Justice bothers me.

SARAH SANDERS, WHITE HOUSE PRESS SECRETARY: No one at the White House has actually seen the memo, so it would be hard for us to make a decision.

BAIER: Other lawmakers say they are tremendously disturbed by what they see in the memo and want to get it out. That's the position that the committee has taken tonight, voting along party lines to do just that.

I want to bring in the panel early, Tom Bevan, Real Clear Politics co-founder and publisher, Mollie Hemingway, senior editor at "The Federalist," and Charles Lane, opinion writer for "The Washington Post." OK, Mollie, we wanted to let that breathe a little to get the details of kind of behind the scenes. The committee voting to release the Republican memo but the Democratic memo, voting not to release it at this moment.

MOLLIE HEMINGWAY, SENIOR EDITOR, "THE FEDERALIST": Yes, and this is a summary memo. This is a four-page memo that is just a summation of a year's worth of work, hundreds of thousands of pages of testimony and visits to foreign countries and speaking with all sorts of people. What broke today about McCabe, Andrew McCabe, the number two at FBI stepping down suggests that we have a pretty big situation on our hands. He's only the most recent person to be demoted, step down, or be reassigned after Congressional or other inquiries into some of what was happening over there at FBI.

You had Bruce Ohr who was demoted twice. You had Peter Strzok, who had to be taken off the case. You have who is gone, and Rybicki also. So this is quite a collection of people. Obviously there's something huge going on, and I think a lot of people in the media are missing this very large story. Perhaps this memo will help us learn a little bit more about what it is that's causing all of these changes.

BAIER: So Tom, the deputy director McCabe leaves today, scheduled to retire mid-March. Leaves today kind of abruptly. We had sources saying that you could say he was removed. The New York Times changed its headline and said that he stepped down under pressure. And this graph, "In a recent conversation Christopher Wray, the FBI director, raised concerns about a forthcoming inspector general report examining the actions of Mr. McCabe and other senior FBI officials during the 2016 presidential campaign when the bureau was investigating both Hillary Clinton's email use and the Trump campaign's connection Russia. In that discussion according to one former law enforcement official close to Mr. McCabe, Mr. Wray suggested moving Mr. McCabe into another job which would've been a demotion." All of this factoring in the day after Wray reads the memo up on Capitol Hill.

TOM BEVAN, CO-FOUNDER, REAL CLEAR POLITICS: And as Brit said earlier, it could be a coincidence, but at this point it's probably safe to assume there are no coincidences with regard to this situation. I think Mollie is right, this is a big deal, the fact that the number two at the FBI has been removed, stepped down, whatever you want to say.

I think the release of the memo which is going to come in the next few days, it appears most likely we are going to see this, is going to shed some light, a lot of light on why he stepped down on what's been going on behind the scenes at the FBI.

CHARLES LANE, OPINION WRITER, "WASHINGTON POST": I was struck by Lindsey Graham who said I want someone without a political bias to look at this before it's released. And my thought was where is he going to find that someone without a political bias, because the situation is so polarized around this. Ted Lieu, who is an ultraliberal Democrat, has said this is going to wind up like Al Capone's vault, or whatever it is. You're going to walk in and there is nothing there. It's a big nothing-burger. Other people are saying, the Republicans, it's the most disturbing abuse of authority they've ever seen.

It is supposed to bear, just to refresh everyone's memory, on the question of whether the Steele dossier influenced the issuance of a FISA warrant against a member of Trump's campaign or not.

BAIER: Just to rewind, Steele, Christopher Steele is the British spy who was hired by Fusion GPS, a company that received money from the Hillary Clinton campaign and the DNC to do oppo research.

LANE: Right. And what I will be looking for in the document to make my own judgment is do they really have a smoking gun on that? Can they really show that if not for the Steele dossier, this FISA warrant would not have been issued? That would be a big deal. If it is anything a little bit more murky than that I think we're going to still have arguments.

HEMINGWAY: I think this memo is better thought of something that begins a discussion about these things. For instance, it's not just about whether the FISA application was based solely on this dossier, but if it were used at all. If this opposition research document paid and funded by the Hillary Clinton campaign --

HEMINGWAY: Andrew McCabe said recently that there was nothing in the dossier that was verified other than publicly available information. So if that was used in any way, that's a pretty serious situation. Also there were other ways the dossier was used. Information in it was briefed to members of Congress. And of course it was also the basis of this entire whisper campaign about treasonous collusion between Trump and Russia. It was the fact of the dossier being briefed to President Trump and President Obama and then quickly leaked to a media outlet that kind of created this whole hysteria that we've been subjected to for a year. So there are a lot of questions and a lot of questions about what senior FBI officials were doing playing around with this.

BAIER: And the fact that we are not talking about the inspector general's report which also should be coming out very soon, whether we get to see it or not, it's going to be there.

BEVAN: Right, which in many respects would carry more weight than either partisan memo from the Republicans or a partisan memo from the Democrats. But let's release everything. Let's have the public have the information. Remember, the argument to release, to publish the dossier from CNN, from BuzzFeed a year ago was that this something that had an effect inside the government with the FBI and the president. That same argument could be used to release the memo from Republicans, from Democrats, and also from the inspector general. Let's see it all. Let's let the public make their determination about what's in those documents.

BAIER: I mentioned The New York Times changed its headline through the day as the got more information about the McCabe stepdown. But another piece has that this memo hints towards Rosenstein, the deputy attorney general, as being in the target basically, and he is the person who could get rid of Mueller.

LANE: And I guess the idea is he renewed the FISA warrant after he got into office.

BAIER: Submitted the application to FISA against Carter Page.

And we should all remember he only had four more weeks to go anyway. He is still going to draw his paycheck. So in terms of the actual difference this makes to the FBI, it's not that great.

BAIER: A lot of breaking news. We took the Democrats who came to the microphones there outside the House Intelligence Committee meeting. They just had that vote. We have not seen the Republicans or had any sign of the committee chairman, Devin Nunes. Panel, stand by. Up next, Congress slugs it out over all elements of the immigration debate. We'll set the table for the state of the union address tomorrow night.