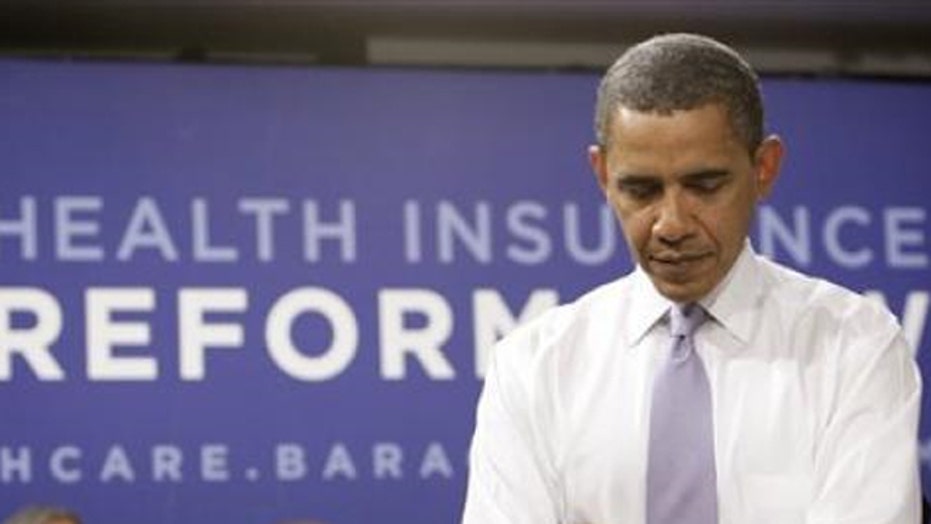 CHARLES PAYNE: We're talking 300,000 into Medicaid, a program that was bust to begin with. It was never suggested or I've never heard the President say, "Taxpayers were subsidized. health care insurance for people who have jobs, in fact up to 400 percent above poverty, a brand new entitlement, that's going to cost trillions of dollars, and by the way you had a plan that was supposedly substandard we'll get you a better one." It's like a banker telling you, "Hey, why don't you buy this million-dollar house you can't afford." History is not only repeating itself, but exponentially more dangerously so.

DAGEN MCDOWELL: I think it's a dangerous proposition that we're getting into where you already have Marco Rubio calling for legislation to ban a bailout of the insurance companies. That is a real possibility. If just the health exchange idea, if the economics and the financials of that fall apart, if you don't have enough young, healthy people signing up, then that subsidy will not be there for people who are older and who are sicker. Again, the burden will fall on the insurance companies. There's a lot of blame being passed around, but ultimately the bill for all of this will fall on the American taxpayer.

CHARLE GASPARINO: This thing is so screwed up; you'd think it's almost designed to fail. I'm thinking the President can't be this inept, these guys screwed up the stimulus package, Dodd-Frank is a mess, but it makes you think they designed it to fail so they could literally socialize medicine. This thing is never going to work. I'm not an expert at this, but even experts that know a lot about it can't get their hands around it. There's a lot of it that doesn't make any sense, particularly the way they rolled it out.

ADAM LASHINSKY: Housing was this multi-decade bipartisan mistake where we "guilted" people into buying homes because it was a good thing and not everybody needed to buy a home. Everybody does need health insurance, which is what this is designed to do. At the end of the day, the government subsidized health insurance for some people. It doesn't mean we're going towards socialized medicine. Whatever happens to President Obama, this thing will have a chance to work long after he's gone.

CHARLES PAYNE: You want to talk about the difference between America not being in a great depression right now, the fracking, oil drilling miracle of North America has been amazing. It's lessened our dependency on foreign oil, created millions of jobs, and billions in tax revenue. The idea that we continue to hold this keystone back is just nuts. I don't know if it's some sort of favorite to the environmentalists. What's the deal, why is this a major topic? It's obvious why we should have done this already.

BEN STEIN: The fact is that petroleum is a worldwide commodity and as a worldwide commodity price but in terms of the national security issue, that keystone pipeline is vital. We're seeing Iran doing kind of piece feelers but I wouldn't trust them as far as I could throw them. I love the idea of North America being self-sufficient and the real environmentalist mistake makers are the ones opposing hydro fracking. Hydro fracking is a gift, a gift to this great continent and I don't think we should be fighting it.

DAGEN MCDOWELL: No, it is a gift and we need to give the U.S. Some credit for these cheaper gasoline and oil prices because we're now producing more oil in the U.S. Last month than we imported for the first time in almost 20 years, which is but to Ben's point we have cheaper oil in this country than other countries. $60 a barrel for Canadian oil as recently as a week ago, you have a $9 to $45 per barrel discount on oil sold here in the United States simply because we are a stable nation.

CHARLIE GASPARINO: Fracking is a great thing, but there are legitimate environmental concerns with fracking. I sat down with some people that know about it at an insurance company and you have to proceed slowly. Why do we need the keystone pipeline right now? Don't we need to conserve some oil for the future?

ADAM LASHINSKY: I'm for it, Neil, but I'm sort of amused. It wasn't so long ago that high gasoline prices were President Obama's and the big, bad oil company's fault.

BEN STEIN: It is a very sad day for the United States of America when you get in trouble and are spied on by the government for reading a book. This started because a number of people bought a book about how to defeat a polygraph test. The book apparently is not verified, but it's an astonishing thing that we reached an Orwellian state where the powerful government agencies come down on you for buying a book.

CHARLES PAYNE: I'm not sure why there is this need by the government to have every ounce of our information, every phone call to this point, every book, everything we do, they must have it all, they must know it at all times. It has no boundaries.

DAGEN MCDOWELL: I should be more hot and bothered by this but I feel like my credit card information and personal information is compromised every day by companies.

CHARLIE GASPARINO: I think we have to thank Mr. Snowden for starting a debate about civil liberties in this country. We're talking about it in a conservative way, how much information government should be looking at and compiling.