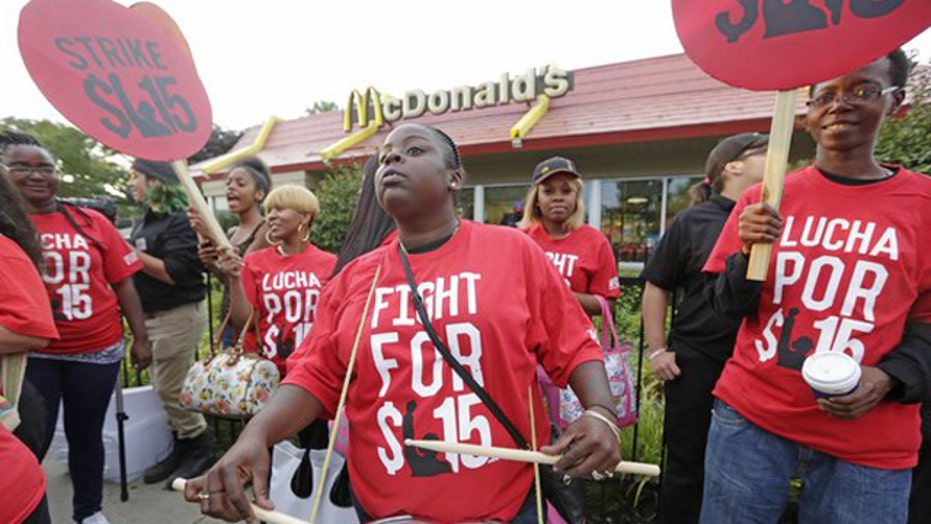 Lisa Boothe: It absolutely will. Democrats are pushing this because it's a cheap political tactic to get low-income voters. That's what they're trying to do. When cash goes into one pocket, it comes out of another. You're forcing businesses to increase costs, which will be passed to consumers, or lay off workers.

Nomi Konst: That's totally inaccurate. Corporations are hitting the highest profit margins every. They can pay their workers livable wages. Nobody can support a family off $16 an hour. The cost of living is higher than ever. How do you get more profits? Put money in the pockets of individuals who will spend money in the economy. That's how the economy is run.

Gary B Smith: Most of the minimum wage workers aren't at these large corporations. I don't know if IBM has any minimum wage workers, for example. But the point is, this has been studied. The fact the congressional budget office came out and said, raise minimum wage, going to lose 500,000 jobs. We envelope then have better tests because states are able to raise the minimum wage above the federal level. It's been studied by UC San Diego. States that raise the minimum wage versus states that didn't cost the unemployment 6% to 8%. You can't just move the money around and magically create this great economy that people think it's out there for all, kumbaya. That's the way the market works whether you like it or not.

John Layfield: Absolutely. Look, if raising the minimum wage would boost the economy so much, raise it to $100 an hour. That argument doesn't hold water. It's irresponsible. It sounds good, even looks better on a bumper sticker, when you say $15 minimum wage. But to say that a minimum wage worker is supporting a family of four, look, that is a pure fabrication. The family brings in $53,000 per year on average. That is a living wage. Most are part-time, most are teenagers or people that are not the head of households. You cannot raise a federal minimum wage because what works in Seattle doesn't necessarily work in Alabama or Mississippi. Allow states to do this. What Lisa said is 100% accurate. The democrats want this for 2016. They will not allow this to be fixed. I promise you that.

Jonas Max Ferris: Just from a purely economics point of view, every town, city, has different economics and wages. If there were no wage laws, maybe around San Francisco, it would be high. In some parts of the country, it could be r5 could be $5. When you raise the rate, and not just minimum wage, health insurance, retirement benefits, there are a whole litany of things interfering with the market wage. You'll get higher unemployment. The question is, is the tradeoff worth it? If it goes to $100, it'll be a point where there's hardly any fast food jobs. It'll be robots. Do we get a psychological benefit with the artificially high unemployment? Do people not turn on their employers if they feel there is a minimum wage and they're getting a little more? There's also another benefit. The cheap goods, the $1 menu at McDonald’s would go away. But having artificially high paid workers serving food, you may get better serving. There is losers and winners because it is artificial.

Gary B. Smith: Brenda, we've seen it time and time again. Terrorists countries, terrorist organizations, organized crime all have an Achilles heel. It's the money. That's what they're really in existence for. Yeah, say they they're arguing to make a point, but the blood, the life blood of them to do all the things you talked about, the propaganda, taking over five-star hotels, all the things they steal is all getting down to the money. You cut that off, Brenda, it'll be just like Al Capone. He finally went to prison, thank God, because of the money thing with the IRS. That's the way to get to these organizations. That's what we need intelligence to do, to cut off the funding. They will wither, die and go away.

John Layfield:  Yes. That's a huge part of it. I agree with Gary. I wouldn't take military completely off the table. It's not an either/or proposition. But you have ISIS not funded like Al Qaeda and other terrorist organizations, from donors giving large amounts of money. It's like a business. North Korea, years ago, we cut off their bank. At one point, the dictator couldn't even pay the main generals. We can put sanctions on any country that deals with ISIS in any way, and you will start to cut off the funding. You can't stop the hostage, because that's private enterprise and government is giving money. The oil shipments and oil cells, you can. It comes from a country. Put sanctions on the countries.

Nomi Konst: I agree, we should try to sanction whoever it is, the actors facilitating the transactions but it's complicated. When you have turkey, an ally of ours, you can't put sanctions on turkey. Who are the brokers? Who are the people who are paying their bills? It's not happening with cash. It's happening through banks, Iraq’s banking system. Who is keeping them running? It's really like working those relationships to make sure we cut off their funding source. It's not going to happen through sanctions when you have allies doing this.

Lisa Boothe:  The problem is, we don't have a president that has built up a lot of trust with some of the allies and coalition partners. The problem is, outside of bombing oil facilities; it's very difficult to try to cut down on their funding. The reality is, ISIS is making a lot of their money from selling hostages to European countries, from selling oil, from taxing businesses and farmers within the territories they control. They also operate largely in cash. The problem is, they're operating outside of legitimate channels that the which he can target and track.

Jonas Max Ferris: It's the same problem with Al Capone. The criminal organizations live off currency. Why do we still have currency. Let's get together with the major countries and phase out currency. At the end of the day, the sanctions only screw up legitimate businesses. The current currency keeps the illegal stuff there. You can't stop it. Doesn't matter how popular the president is aboard. They have billions of our currency in all of these countries. We have to make it worthless. Move it through the banking system where you can track it, seize it. The IRS seizes banking accounts. They can't seize bags of cash. The government is making a good job of making it worthless right now. Can i give john the last word quickly?

John Layfield: The U.N. Is one of the most corrupt, inept industries in the history of our country. The reason the all for food program didn't work against Saddam Hussein was the U.N. I would move it down to Haiti. Haiti could use the economic boost. We could get rid of all the idiots in the state of New York by moving it there.

Nomi Konst: Would the Clinton foundation take over? Saudi Arabia should not be in the U.N. They're violating human rights as much as they think the U.S. Is, if not more. If you're in a glass house, you can't throw stones. What is that metaphor? The problem with the U.N. Is it's bureaucratic. We need them for peacekeeping troops. Facile they relationships with other state departments around the world. They serve a need around the world. The problem is, they are incredibly brew cat bureaucratic. We're dealing with countries that have a different view of human rights.

Gary B. Smith: We don't pay a lot of money, Brenda, to the U.N. We pay 20% of the U.N.'s budget. 20% For crying out loud. Plus, they rack up the tabs in that part of New York like crazy. The amount of unpaid parking stuff there. $3 billion a year, Brenda. I would counter from she said. It always sounds good, the federal reserve, you have this pie in the sky, the peacekeeping troops. Then you get to the reality that john said. You have a corrupt organization that supposedly is charged with enforcing all these moral ethics. They're inept after it and causing us a foreign. I think we should send it to Haiti and we can visit.

Jonas Max Ferris : First of all, every country with human rights violation wasn't allowed in the U.N., It would be Sweden and that'd be it. Us not paying now because they're pointing a finger at us is like the kid getting his blocks taken away because he didn't like how the game is going. We could use a little scrutiny globally occasionally. If you have an issue with the police state getting out of control, I welcome it.

Lisa Boothe: Let's put it in perspective. We're talking about a country that stoned a woman that permits violence against women. There's a little bit of a difference than what they're criticizing the united states for doing. The reality is, the U.N. Is an abject failure. They failed to maintain international peace, and we should absolutely cut off funding.

John Layfield: Get a jolt with Green Mountain! (GMCR) brews a 15% gain in 1 year