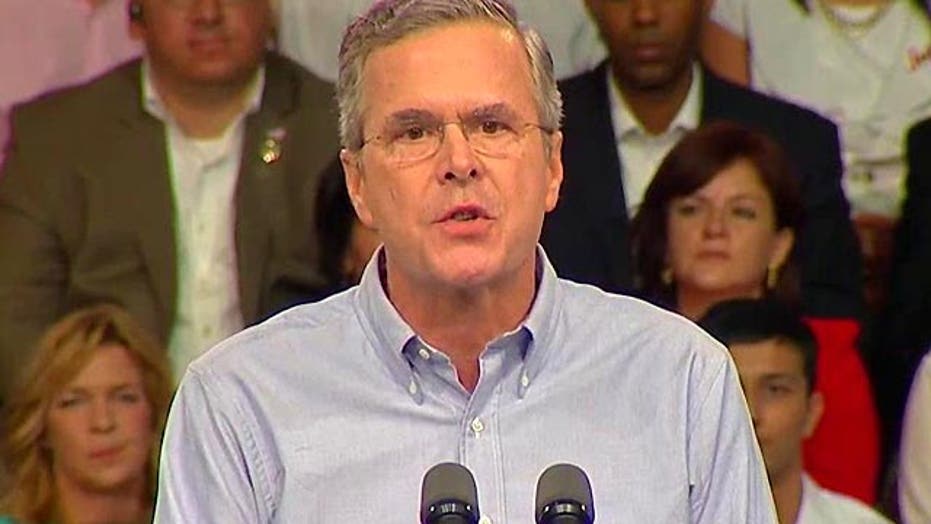 This is a rush transcript from "Special Report," June 15, 2015. This copy may not be in its final form and may be updated.

JEB BUSH, FORMER FLORIDA GOVERNOR: So here's what it comes down to. Our country is on a very bad course, and the question is, what are we going to do about it?

SHANNON BREAM, GUEST ANCHOR: The mystery is over. It's official. Let's bring in our panel to talk about Jeb launching his campaign today, Steve Hayes, senior writer for The Weekly Standard and radio talk show host Laura Ingraham, and Ron Fournier, senior political columnist of National Journal. Good to see you all. Happy Monday. Ron, I'll start with you. What did you make of the speech?

RON FOURNIER, NATIONAL JOURNAL: It was a pretty good speech. I thought there was some humility. I thought he showed some personality. I think he was more forward looking than Hillary Clinton. If I had one criticism, it would be, any great campaign is a story, and a story has a narrative, and a narrative has a hero. In the good ones the hero is the voter. I think with Jeb Bush the hero in his story was him and his party. It wasn't as much about what he would do for us.

BREAM: He did talk about a lot of different things. He talked about religion freedom. He talked about all kinds of things. But one thing I noted wasn't in the text of his speech unless I missed was a mention about immigration, which is one of the tough issues for him. He did have to address, though, when a heckler stood up. Here is what he said in response to some folks who showed up to push him on that issue.

BUSH: By the way, just so that our friends know the next president of the United States will pass meaningful immigration reform so that that will be solved, not by executive order.

BREAM: Laura, that's some of the most fire I saw out of him during the speech today.

LAURA INGRAHAM, RADIO TALK SHOW HOST: That was an interesting moment for a lot of reasons, I think. I think for those of us who believe that it's going to be difficult to out-pander Hillary on this issue, that kind of demonstrated a little bit, right? Because they said they want citizenship now. I believe that was the rhetoric, citizenship now. And Jeb has an idea about how to move forward, normalize status over a number of year. You know, you have to actually pay your way to citizenship. So it's not citizenship now. It's earned citizenship.

Hillary is going to come forward and she's going to say, well, that might work in a Republican primary, Jeb, but I think these hardworking people who are Americans in everything except a piece of paper should become citizens expeditiously. You want to delay what these people have worked so hard for. How dare you.

I don't know what his answer is going to be that. It will help maybe a little bit with the grassroots, but I think that's going to be a little tough. So I thought that moment was interesting. I think it was smart that he didn't probably bring it up in the speech. He'll have plenty of time to talk about it in the speech.

FOURNIER: You don't think his answer plays better to the middle than hers will? The way you describe her is awfully --

INGRAHAM: The base moves I think in the general. And we know what the Democrats can do with getting out the base. And I don't think the base of the Republican Party is going to rush to vote for Jeb because he's going to give a 10 year period before everyone gets to vote. I think that was an interesting moment.

BREAM: Well, Steve, he did get a dig at the current president saying I'm not just going to do it by executive order. And he talked a lot in this speech about how Hillary would be more of the Obama policies and more of the same with not necessarily always using their names, but certainly the suggestion was there.

I think the question about Jeb Bush's candidacy has been since his Facebook post has been basically will he campaign more like the conservative reformist governor that he was for eight years in Florida, or will he be a person who has been a critic of the Republican Party and picked fights on things like immigration and Common Core?

I think if you judge it based on this speech, it's certainly more the former. It is certainly more running on his record. He obviously wanted to highlight the things that he's done in Florida, the fact that he made some conservative reforms. He certainly spent a lot of time -- several references to his opponents, his rivals in the Republican primary whom he would claim haven't done anything. They don't have a record that they can run really on. It's not enough to just be a senator. I think that was sort of the emphasis of the speech. I thought he started off a little unsteady, didn't seem very comfortable. But as he progressed, I thought the speech improved, and overall it was a pretty good start for him.

BREAM: He did, both in the video that we all saw that was released yesterday, played at the event, and at the event today, so much highlight on his time as governor. He had people tell their stories about how he benefited them. But somebody else who is very familiar, a fellow Floridian, head of the DNC, Congresswoman Debbie Wasserman Schultz, had this to say about how she thinks Jeb works.

REP. DEBBIE WASSERMAN SCHULTZ, (D) FLORIDA: He would do anything and everything to prevent you from getting your way and him -- and to make sure that hell would freeze over before his way would not be adopted. So it's important to know that this is the style of our former governor, not exactly a prescription for breaking the logjam that we have in Washington right now.

BREAM: Ron, he's going to point to things he got done with Democrats across the aisle in Florida and say what she's saying is in direct contrast to what he's going to say is the reality.

FOURNIER: He does have a very conservative record in Florida and it is something that he did smartly run on today and he's going to run on it in the primary. It is, though, a record that in the middle, in a general election, Democrats can be able to use against him. But he's starting to inoculate himself against that. When you say, hey, I know how to get things done. What I say I'll do, I'll get done. I know how to fix things. The American public right now is looking for a leader. I don't know if they are looking for a Bush or a Clinton, but they are looking for a leader who can fix things.

BREAM: Laura, he talked a lot today, and it's become a good stump line for him, about religious freedom and talking about the Little Sisters of the Poor being under attack by the administration and saying if it comes down Little Sisters or Big Brother, I'm going with the Little Sisters.
That's something we expect a lot of the more conservative candidates are going to talk about.

INGRAHAM: He's smart to mention that. Is there an easier group to defend then the Little Sisters of the Poor? Yes, I'm for the nuns. Yes, great. So, yes, it was a nod to religious freedom. But when it comes to the primary contest, you're going to have people who have been out there for years fighting for this. Ted Cruz has been out there for years. I think Marco Rubio has a good story to tell.

There's a concern, I think, among a lot of people, and I've voiced this in the past, that for all these years where we actually needed Jeb's voice, because he's a really smart guy and he did I think have a really strong record in Florida, he was kind of quiet. He went underground except on immigration. We didn't hear from him a lot. He's was doing events with Hillary Clinton, education events. And he's out there making money. That's fine. But on these really critical struggles for the country, we didn't see much from him. And I think conservatives think could have used his help and he wasn't there. And those other primary candidates, I think going to bring that out.

FOURNIER: A quick step to back it up. So he's been out of office in Florida so long that 75 percent of Floridians that were alive have not had a chance to vote for him. That's a long time.