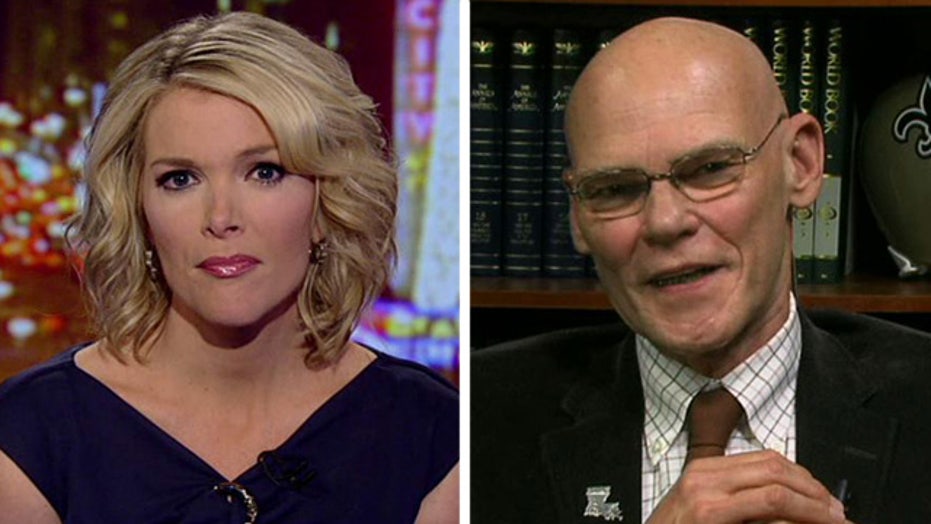 Will he listen? Clinton urges Obama to keep promise

James Carville on the challenges facing the health care reform

This is a rush transcript from "The Kelly File," November 12, 2013. This copy may not be in its final form and may be updated.

KELLY: And a professor at Tulane University. James, great to see you again. And so, a lot of speculation after Mr. Clinton made those remarks about whether or not he was trying to create distance between Hillary Clinton and obviously contender possibly for 2016. And Barack Obama/ObamaCare. Your thoughts.

I have no idea, I think what he said and made sense, and of course, the White House came back and said we agree with President Clinton, because President Obama told Chuck Todd a week ago or so that we'll going to work on a way to try to get these people included.

KELLY: They're going to look for fixes, which you know, one trial balloon floated we believe to The Huffington Post was perhaps, there will be premium subsidies which we require Congressional approval which most people do not believe will happen.

But my question is, why would Bill Clinton weigh in on this? And what do you make of the speculation that it's for his wife's political fortunes?

CARVILLE: Well, first of all, President Obama weighed in on this a week ago, Senator Landrieu has weighed in on it. It was a topic of hot conversation, and I do not know if he did it in response the question or brought up himself. But look, there is a lot of -- there is a rough time here. And the president's numbers are down. So it is kind of a political backing to have people move into it.

But I don't think what the president said applies to very few people. And I'm not sure what his motivation was. But I think it was just reacting to something that is popular that these people don't lose their insurance, is my guess.

KELLY: It's not, but it doesn't apply to very few people. The latest numbers are the 5 million people have lost their insurance thus far. Five million.

KELLY: It is not a coincidental, I mean --

KELLY: There is no question it's due to this law --

CARVILLE: How many people lost their insurance in 2009? We just keep throwing figures out.

KELLY: But when you do that, you undermine the position of your party, because you're diminishing the real loss that people are feeling. We have had testimony night after night on our air, even Kirsten Powers tonight on "Special Report" was talking about how she had the great plan that she loved as a Democrat, that she loved that's been canceled, her premium has been doubled, and she says people who suggest otherwise are just misleading.

CARVILLE: I can't tell you one person, I can tell you that this covers five percent of the market.

KELLY: But that is 15 million people!

CARVILLE: Hold on just a second. You got to take out all the people who had insurance before 2010, and you have to take out anybody that is under four times above the poverty line. I mean -- usually when they come on you read well, this person actually fares better under ObamaCare. You're just throwing numbers around that we lose all of these people are losing insurance because of ObamaCare --

KELLY: Well, the estimates are it could be as high as 129 million once the employer mandate kicks in. But that is a debate for a different day, that's a debate for different day because you're not health care policy expert and neither am I. OK. But I have had people on the show talk about those numbers.

KELLY: What I want to talk you about politics, because that is your area of expertise, and it is no accident that Bill Clinton weighed in on this. James, you know that's the truth. Don't spin it. Why would he do it? I mean, is this basically trying to say to the American people or to the Democrats, it is OK to run. It is OK to distance yourself to this law, you know, the grand poo-bah of the Democratic Party is saying it is all right.

KELLY: No, they're not on the same page.

KELLY: Jay Carney said it would be like throwing out the baby with the bath water if they tried to actually reinstate those insurance policies. The administration thus far appears to be talking about some fix, which so far could be a premium subsidy.

CARVILLE: The president told Chuck Todd that he would like to fix it where these people could keep their insurance.

KELLY: Honor the commitment that was made. Right. How can they do that? I mean, that's what -- Senator Landrieu and from Bill Clinton are on the same page, trying to keep the insurance. But the problem is, is that possible? They have already been canceled. The insurance companies have already moved on.

CARVILLE: Well, they're canceled in the individual market, I think something like that, only 17 percent keep their insurance from year to year, so if this was happening. The idea that somehow no one got their insurance canceled before 2010 is just absurd.

KELLY: That is not the suggestion. Well, a lot of these policies were changed, they were only changing --

KELLY: But it was not meant to be this way, James, it wasn't meant to be this way. We had one of the architects of ObamaCare on this show last night. A Democrat, the senior adviser to President Obama on this law who said, we did not mean, we did not mean for the individual insurance market to essentially be canceling these insurance companies to have to cancel these policies. That is not the way it was supposed to go down.

CARVILLE: Again, it could be any number of reasons, but I think what the president said, and what they're looking for here is a way to fix this. But again, you have to be against President Clinton was pretty clear that he was talking about a very narrow segment of the population.

KELLY: Let me ask you this though, because there is a question about whether these polls are in free fall, and whether the president is in free fall and what the Democrats are going to do as a response. The latest poll from Quinnipiac came out today, it shows that President Obama's approval ratings now at 39 percent, look at the fall that he had just in the past month. It was 45 on October 1. Is the president trustworthy and is he honest? Look at these numbers. Now, only 44 percent believe he is trustworthy, 52 percent say, he is not honest. And that is another precipitous fall from October 1.

Is there now -- does that now explain why Democrats like Dianne Feinstein who is not up for re-election, Mary Landrieu who is and voted for this law, are now starting to come out and say, we want to actually keep the president's promise.

CARVILLE: You know what, when the poll numbers fall, you run into a political trouble, there is no denying that. I can't -- and if you asked me that some of the result of his political position weakening, sure it is.

KELLY: Well, it's more than that. I mean, my question is, really has he sacrificed his credibility in making a promise that did not --

CARVILLE: You take some polls that are done at the right time. Look, this feels like August of 2011, when the Republicans were going to win the election, and everything is going to be fine because he couldn't win -- he came back. You can't take one poll, one set of polls, a period of polls. And if this thing rolls out on November 30th, as people hope it does, these poll numbers will probably go up. The truth of the matter is that these roll-out is been not just a disaster, it is been a joke. And people look at it and they say, I don't think he is doing a very good job. To some extent you can't blame some people for thinking that. But if he gets it right --

KELLY: But you remember 1992 better than anybody, right? You and Stephanopoulos and Bill Clinton got elected. You got him elected as president. And one of the things you exploited was a promise by President George H.W. Bush, read my lips, no new taxes. A broken promise can be the difference between election and not election, for the party. And the question is, how much damage has Barack Obama done to your party by what was clearly was an un-kept promise?

CARVILLE: You know, honestly, in 2016, if this thing rolls out I think it will be fine. Look at all of these polls, and if I was in a Republican Party, you want to talk about a free fall, look at the approval rating of the Republican Party. It has been in free fall for I don't know how long.

CARVILLE: You are looking for a bigger deal here. But his political positioning is weakening, there is no doubt about that.

KELLY: Last question for you. Elizabeth Warren, Hillary's nightmare according to the New Republic when it comes to 2016, your thoughts on that.

CARVILLE: You know, everybody, one person, Norm Travis (ph) is a good guy, good reporter, Tulane grad, Rhodes schoar top of the class. I don't think that Elizabeth Warren is considering running for president. But, you know, wait and see, it is a big office, I think Hillary will be fine.

KELLY: All right, James Carville, always great to see you.

CARVILLE: Thank you, Megyn, I always love to be on your show.