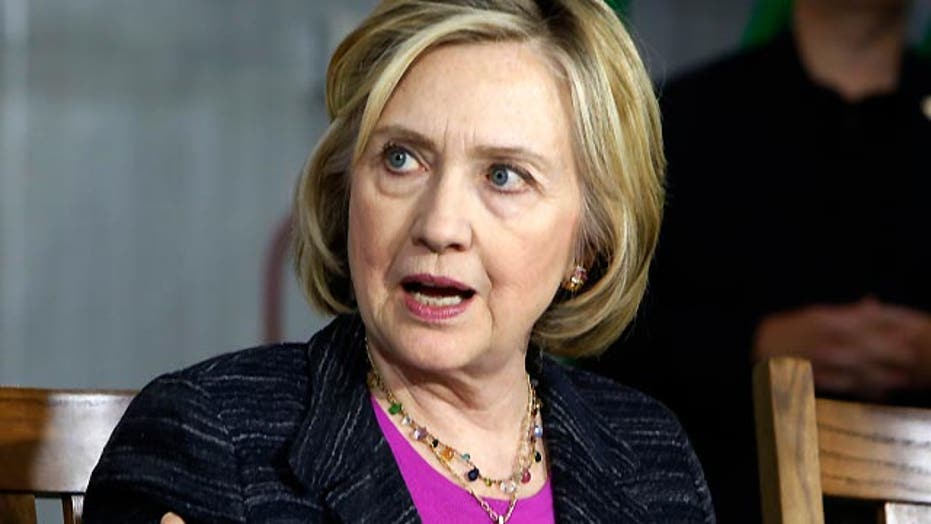 This is a rush transcript from "Special Report," June 15, 2015. This copy may not be in its final form and may be updated.

BRET BAIER, ANCHOR: All right, before we head to the Candidate Casino, first a quick lightning round on Hillary Clinton, the big speech tomorrow. She did not, by the way, Steve, make a decision on trade, so it's interesting how this plays for her.

STEVE HAYES, THE WEEKLY STANDARD: Sort of extraordinary that she is able to muddle her way through this entire thing. I was watching another network on the way down, and basically one of her spokeswoman say she is not going to give a position. And I think you can't do that if you are running for president.
You need to be able to take a position and make argument on behalf of the things you believe or people aren't going to want to choose you.

AMY WALTER, COOK POLITICAL REPORT: That's what she is going to try to do tomorrow, right? She is fighter. She wants people to remember her for this. Except for on this we'll let somebody else maybe fight it for a moment. Who knows? Maybe she will come out say something. Of course it's a lot easier to come out once the decision has already been made, so.

JASON RILEY, WALL STREET JOURNAL: It's also true, or it's been reported that she is going to open up a little bit about the buyer, talking about her mom. I think that can't be everything running on biography. Just ask John McCain. But it could help. If it helps showcase her warm and fuzzy side, I think voters will appreciate some of the personal stuff.

BAIER: OK, every week we head down to the Candidate Casino. The GOP side, get $100 in chips and see where it has shifted at all with the panel. Jason, what do you got?

RILEY: I still think it's a three horse race, Rubio, Bush, and Walker. I've giving Rubio $5 more because The New York Times especially seems very fearful of him so he must be doing something right. I am giving $5 dollars to Paul, Huckabee, Carson, and Cruz because they have been polling in the high single digits. I don't think they are top tier candidates but I wouldn't be surprised if one of them spent a little bit of time in the top tier.

BAIER: OK, Alyssa James on Twitter, she writes in "After last night's impressive performance by Carly Fiorina," she's going $40 for Walker, $30 for Fiorina, and $30 for Marco Rubio. OK, Amy?

WALTER: I'm sticking with the same top three. But I put a little bit more money into Scott Walker. I think is he positioning himself very well in the Republican primary. I don't know, though, if he is positioning himself well enough for the general. He is moving pretty far to the right, I think, to help coalesce his Republican base. That may hurt him later. But I think it is certainly helping him over somebody like Jeb Bush. I also put another $5 in my martini fund because I'm going to need it after this primary is over.

BAIER: It's going to be a long run.

HAYES: I don't have any money on Donald Trump people will be surprised to hear. I gave Marco Rubio a little boost this week. I've got $50 on Marco Rubio, $30 on Scott Walker, $15 on Jeb Bush, and $5 on Ted Cruz.

Look, I think Marco Rubio benefits not only because the New York Times tried to go after him twice this week and I think really missed and missed badly, particularly in the one story about his traffic tickets, but also, you saw conservatives rally to his defense in a way that is hard to imagine them doing for a lot of other candidates. Probably they would do it for Scott Walker. I would think he would see the same kind of defense. Would they do it for Jeb Bush? Would they do it for a Chris Christie? Hard to see.

BAIER: So quickly, is he the winner out of Camp Mitt in Utah?

HAYES: Yes, he certainly could be. He gives a speech. He's already got a picture out with him playing flag football that the Rubio team is putting out.

BAIER: Kasich is trolling for money to.

WALTER: I still think being a governor is going to be very important when you talk to voters out there, that's what they want to see. They hate Washington. Even though the Republicans are better here, they don't like the fact that they're from Washington.

BAIER: And we will invite all of them to "Center Seat" here with the panel. That is it for this panel.