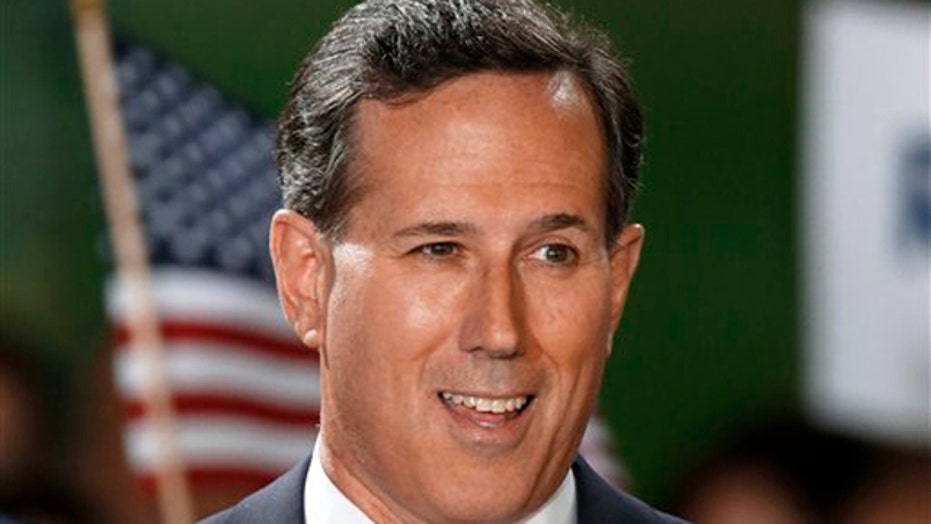 This is a rush transcript from "Special Report," May 27, 2015. This copy may not be in its final form and may be updated.

RICK SANTORUM, PRESIDENTIAL CANDIDATE: I know what it's like to be an underdog. Four years ago, well, no one gave us much of a chance. But we won 11 states.

I am proud to stand here among you and for you, the American workers who have sacrificed so much, to announce that I am running for president of the United States.

BRET BAIER, ANCHOR: Former Pennsylvania Senator Rick Santorum is in, and he's right, a lot of people didn't give him a lot of time the last time around. He ended up winning the Iowa caucuses and 11 states.

Here are the polls right now. The average of the latest polls on Real Clear Politics, and there you see Santorum at 2.3 percent behind a growing field that is continuing to grow really by the week. So let's start with our political panel. Let's bring in our panel, Tucker Carlson, host of "Fox & Friends Weekend," radio talk show host Laura Ingraham, and Charles Lane, opinion writer for The Washington Post. OK, Tucker, Santorum, pros, cons?

TUCKER CARLSON, FOX NEWS HOST: I think Santorum gets mis-categorized as purely a social conservative or evangelical. He's not really. He's Catholic. He's not Protestant, even. So he's not technically evangelical. He is a social conservative. He's a passionate and articulate opponent of abortion and will always be. But he's really running as an economic populist, and he's doing it in a very compelling way. I'm not saying he's going to win the nomination, but I'm saying he's giving voice to sentiments which are widespread among Republican voters in the base. The middle class is in deep trouble and the wage stagnation is an actual issue that doesn't affect anyone here in D.C., but it affects the rest of the country. Rural America is collapsing. These are real things. And it shouldn't be left to Hillary Clinton to be the only person articulating that message. She is a false, I would say, flag carrier for that message, and I'm glad that he's out there talking like this.

BAIER: Blue collar conservative, that is a book he wrote. That is a theme he's hitting.

LAURA INGRAHAM, RADIO TALK SHOW HOST: I think, look, he won the Iowa caucus. Remember, we didn't find out that he won until a week later. That didn't really help him much. So I think a lot of people thought he got short shift last time around.

A lot of new faces ion this race this time. So people always want the next thing or the new thing. And I don't know if that will hurt him or not. But I think Tucker touched on something very important, and sometimes the media forgets about this, that there's a big divide between the donor class and where the voters are on key issues. He touched on those today. Immigration, foreign workers displacing perhaps American workers, trade, and maybe even on some of these other social issues where more of a libertarianism has crept into the Republican establishment. And the voters are a little more traditionalists. So that's key in looking at Santorum's still I think continuing appeal. That's halfway to the nomination. That might be a little hard to see it.

BAIER: Clearly he goes through Iowa. And he has to, Chuck, have a big performance in Iowa and has competition there for Iowa. You have Ted Cruz and Mike Huckabee and Governor Walker all competing in the same --

CHARLES LANE, OPINION WRITER, WASHINGTON POST: This blue collar -- this combination of social, traditional blue color populist would impress me a lot more if he were the only one doing that. But Mike Huckabee is going to get the exact same -- that's already kind of a narrow band, let's face it. And Huckabee is now trying out the same message on that same group.

I think Rick Santorum was lucky the last time around, Bret, because he was sort of the last plausible one standing up against the presumptive nominee, Mitt Romney. Now there's so many strong candidates. There's a lot of top-shelf incumbent governors, incumbent senators and so forth that this is really not his time.

BAIER: I want to get to another dustup that happened today and over the past couple of days, Rand Paul and now Bobby Jindal back and forth.

RAND PAUL, PRESIDENTIAL CANDIDATE: ISIS exists and grew stronger because of the hawks in our party who gave arms indiscriminately, and most of those arms were snatched up by ISIS. So everything that they have talked about in foreign policy they have been wrong for 20 years.

GOV. BOBBY JINDAL, R-LA.: I think the senator is unsuited to be commander in chief. We can't afford another four years of a misunderstanding of the threat. We need a president that speaks with moral clarity, with honesty, that looks the American people in the eye and describes the threat we face in radical Islamic terrorism.

BAIER: What about this? Obviously Chris Christie has been speaking out about Rand Paul as well.

INGRAHAM: I think Rand Paul, this is what he is going to be getting. He better get used to this because I think pretty much everyone in the race except Rand Paul is going to be criticizing him on this issue.

Now, we should also say that he also represents, Rand Paul, I think a significant number of people in this country who want America to be strong, who want us to have a strong foreign policy, but also want us to have a smart foreign policy. And for a lot of those people they thing, gosh, we seem to be getting weaker the more we get mired in the Middle East. We have to make sure that if we go back into the Middle East in a really meaningful way, we do it the right way.

CARLSON: Bottom line, a hurt dog barks. The people being criticized are stunned because his words are meaningful. I'm not endorsing Rand Paul. I don't agree with a lot of things he says, but I do think you need a moment of national reckoning where we ask ourselves a simple question. What is the lesson over the past 13 years of Iraq? Have we learned anything? How would we proceed differently based on what we just saw?

And the other candidates, most of them, I would say, are committed to this, we've learned nothing. The world is exactly as it was on September 12th, 2001. Really? That is not - I don't think that's a recipe for success. I do think you need --

BAIER: But do you think that this is a recipe for a pathway to the GOP nomination?

CARLSON: I don't. I absolutely don't. Laura is absolutely right. He's getting hammered. Again, I'm not defending Rand Paul. I'm not an advocate of his campaign. But I do think the question hangs in the air, what have we learned?

INGRAHAM: It's a big debate out there that has to be had. Will it be had when there's one person making the case and an entire field saying, oh, no, no, no, it has to be this way. It's an interesting debate. We should have it.

LANE: I listened to that sound bite from Rand Paul and was just reminded of why he's not -- the real reason he's getting this criticism, which is the things he says are sloppy and superficial. To literally blame the rise of ISIS on the hawk in the Republican Party is just ridiculous. Let's face it, there's so many other factors that have gone into it.

And furthermore, the problem is not how do we un-ring all of the bells that were rung in the past that may have led us to this point. The problem now is, how do we deal with this menace? And it is a real menace, it is a real big menace. And Rand Paul's only answer to every single foreign policy problem is stay out. That's his only answer. And I'm sorry. That is as unrealistic as the other plans. And that is why he is coming under fire, because he does Johnny one-note, and his one note --

CARLSON: Really, because there are other Johnny one-notes in this conversation. It's not even a conversation. It's competing soliloquies. But I would say the same people who are upset about ISIS, and I wouldn't include all of us, but many of them are the same people who empowered Iran by handing Iraq over to Iran, and those people have never had to answer for what they did.

BAIER: But is it, this narrative, this question, while important to discuss, is it undercutting what the GOP is saying about President Obama's lack of leadership on ISIS and the talking point that they have been using on Capitol Hill and everyplace else?

INGRAHAM: I think this is the peril of talking only about ISIS. ISIS, ISIS, ISIS -- ISIS is important, but we have China right now making a major move in international waters, challenging the United States aggressively. Who knows, the next thing China does may be to take Taiwan. Are we even going to talk about that possibility? Are candidates even asked, Chuck about China? What are we going to do to be a counterweight --

LANE: Which is likelier to happen in the next two years, ISIS takes over the oil fields of Iraq or China takes over Taiwan. I think it's pretty obvious.

INGRAHAM: I think China is a strategic problem for the United States. It's an economic challenge to the United States that we haven't even begun to discuss. We should discuss both issues seriously.

CARLSON: Making a YouTube videos about it, perhaps it will be.