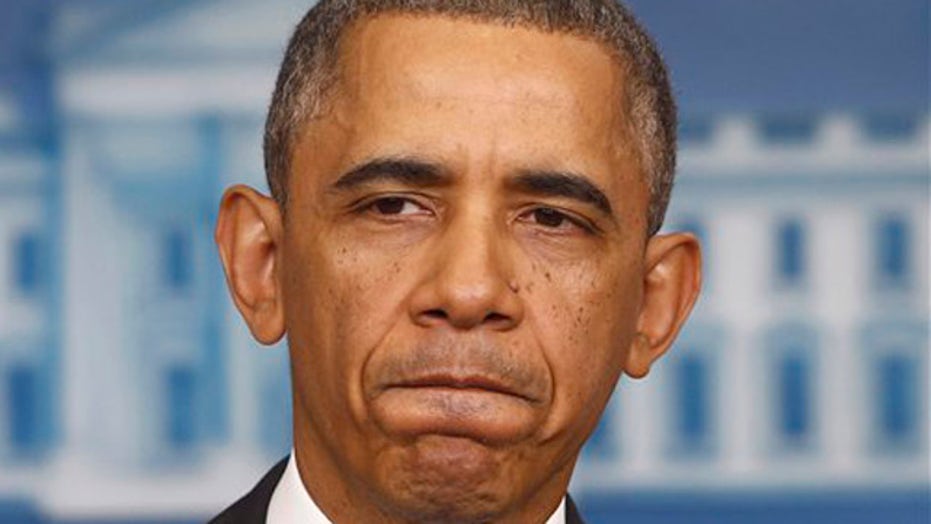 Will 2014 be marred with more scandals for Obama?

This is a rush transcript from "Hannity," December 30, 2013. This copy may not be in its final form and may be updated.

KATIE PAVLICH, GUEST HOST: Well, 2013 was a year to forget for team Obama. And thanks to ObamaCare, 2014 may be just as painful for the president.

Hello, everyone. I'm Katie Pavlich, in tonight for Sean. In a moment, I'll be joined by a bipartisan panel of pundits who will share with us their bold predictions for the coming year.

But first, the administration made some news over the weekend by proudly announcing that 1.1 million Americans have, quote, "enrolled" in ObamaCare. And while the White House is ready to pop open some champagne in celebration, critics of the law remain unconvinced. Take a look.

REP. DARRELL ISSA, R-CALIF.: You know, there's 318 million Americans, one million getting on subsidized health care in many cases, probably another million getting on Medicaid a result of ObamaCare, and 6 million people who had plans they liked that have been thrown off of it. I don't think there's anything to celebrate.

PAVLICH: The congressman is spot on. The alleged 1.1 million enrollees announcement is laughable and falls far short of the administration's goal. In fact, back in September, HHS secretary Kathleen Sebelius was asked to estimate how many people she expects to sign up. Remember this?

SEBELIUS: Well, I think success looks like at least 7 million people having signed up by the end of March 2014.

PAVLICH: That means in the next three months, she needs to miraculously find 6 million people to volunteer for this train wreck. Good luck, Madam Secretary!

And here to help us recap the disastrous year and to share with us their predictions for 2014, the author of the new book, "The Happiest Life: Seven Gifts, Seven Givers and the Secret to Genuine Success," radio talk show host Hugh Hewitt, and Democratic strategist Penny Lee. Thank you so much for being with me.

PAVLICH: So Hugh, we'll start with you. Aren't -- isn't the Obama administration stretching this term "enroll"?

HEWITT: Oh, very much. The grim statistic -- you just pointed it out -- we are not going to get six more (sic) people to sign onto this train wreck. That was very funny. And in fact, the Medicaid expansion is going to backfire on most of the people who ended up in Medicaid.

So if 2013 was grim, it's an exponentially worse outlook when it comes to ObamaCare. Add into that that the president has a still unfolding fiasco in Iran, Syria, Lebanon, where the assassination happened just two days ago, no domestic initiative that has any momentum behind it and a growing recognition that there's no way to resurrect this presidency from other than a failure.

I just think he better enjoy his Hawaiian holiday because when he comes back to town...

HEWITT: ... there is not much good news for him.

PAVLICH: Well, Penny, what about you? Do you think the White House should be celebrating this 1.1 million enrollees, considering it used to be the definition of "enrolled" was simply putting something in your shopping cart, not necessarily being covered, and definitely haven't paid for that plan?

PENNY LEE, DEMOCRATIC STRATEGIST: Well, unlike others, this is the holiday season. I didn't find all lumps of coal in the stocking. I mean, there is some good news that is out there. And a lot of that is pointed (ph) on the economy.

The president wrapped it up well when he said in his closing press conference, look, we've added 2 million new jobs. Unemployment is coming down. Housing starts are going up. We are seeing an economic recovery starting to begin. We had four percent of GDP growth.

So there are some good news out there. And a lot of people want to just lump (ph) the whole thing and call it one big disaster, but it wasn't. There is another side to the story, and that is on the economy that it is beginning to improve. And I think that is beneficial going into 2014, and especially from the various elections that are out there. The economic news really is what is people's focus is going to be on. And that is I think bodes well for the Democrats going into the election cycle.

PAVLICH: Well, I'm not so sure about that, Hugh. We're talking about the economy. You know, there are millions of people who are not in the workforce as they were when President Obama started his first term. People are losing their health insurance plans. And ObamaCare isn't going to help that. We're going to see even more layoffs next year, don't you think?

HEWITT: Yes, we're going to see a lot of small businesses drop their employees. Big story today out of Michigan about a dealership that did that. It's the first domino to fall that people are going to find that their employers are no longer going to participate. They'll be thrust into these bronze plans and they'll be terrible.

So while Penny is right, as a Democrat strategist, to try and find something -- and fourth quarter GDP, sure, maybe that's real, maybe it's not. It looks like two percent for the year. Most people feel that we're not in a growth mode. Most people will be writing much larger checks for the health insurance they have for fewer benefits. And our friend, Mary Katherine Ham, came up with the term "doc shock." They're going to run into doc shock, as well.

Add into all of that that the Senate is fractured and broken. Mitch McConnell and the Republicans are still angry over Harry Reid's unprecedented destruction of Senate rules. It's going to be a very rugged year.

I wrote "The Happiest Life" because I thought we ought to focus on how to turn people around to look towards good news. But if I'm a Democrat, I might want to just stay under the covers for the next 12 months.

PAVLICH: What do you think, Penny? Are the Democrats going to just stay under the covers?

PAVLICH: Is Harry Reid's move with the filibuster a good thing, or do you think that's actually going to cause even more gridlock that the president loves to complain so much about?

LEE: How much more gridlock can you have? I mean, come on. You have a House that is absolutely intransient (sic) that actually can't even control their own caucus. You have Boehner now going after his own Tea Party members, saying that their strategy was actually 100 percent flawed. You had a flawed strategy of shutting down the government that actually had repercussions on the Virginia elections. For the first time, Democrats swept all statewide elected offices in Virginia.

PAVLICH: I'm not so sure when people are seeing their health insurance go up and their doctors gone that they're going to be able to keep the Senate.

HEWITT: My first prediction is the exact opposite of Penny.

HEWITT: ... this time next year, senators will number more Republicans than Democrats, led by Tom Cotton in Arkansas, Shelley Moore Capito in West Virginia. There's a long list, and it's getting longer. In Virginia, if Ed Gillespie comes into play, Colorado's going to be in play. There's talk of a Minnesota candidate to take on Al Franken. There are lots of states that weren't even on the board and the board already looked good.

PAVLICH: Penny, what's your prediction for 2014?

LEE: Well, obviously, that is -- that is second. But the other thing that I would say on the economic front, I do believe -- and this is something that 50 percent of Republicans support -- is I do believe that the minimum wage for the first time since 2007 will be increased. The American people are asking for a raise. They haven't had one since 2007. And I believe that is actually going to be on the side that President Obama can show leadership on and actually bring the rest of the country along with him.

HEWITT: That's the funnies thing going because I don't hear anybody out there on the street talking about the minimum wage.

I do have to put the key prediction out there, though. Reince Priebus will announce that the convention in 2016 will be held in June and it will be held in Cleveland, which will build on that city's momentum from the Browns' Super Bowl win that year.

PAVLICH: All right. Well, Penny, Hugh, thank you so much for being with us. We appreciate it. Happy New Year.