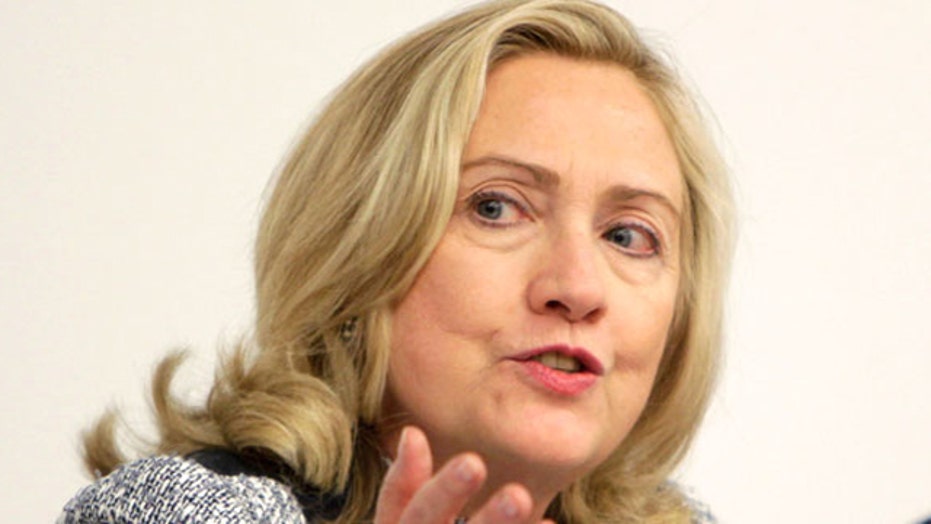 Why you don't want to get on Hillary Clinton's bad side

This is a rush transcript from "Hannity," January 13, 2014. This copy may not be in its final form and may be updated.

SEAN HANNITY, HOST: Tonight -- tou do not want to get on her bad side. A new brand-new book exposes how former Secretary of State Hillary Clinton keeps a naughty and a nice list, and doesn't forget those who have wronged her. Now, in a moment, former Clinton adviser Dick Morris will be here to shed some light on these allegations.

But first, excepts of the new book title "HRC, State Secrets and the Rebirth of Hillary Clinton." They were posted on line at TheHill.com and on Politico.

Now, they read, in part, quote, "Almost six years later, most Clinton aides can still rattle off names of traitors and the favors that have been done for them, then provide details of just how each of the guilty had gone on to betray the Clintons as if it had all happened just a few hours before."

Now, "The data project ensured that the acts of the sinners and the saints would never be forgotten. And there was a special circle of Clinton hell reserved for people who had endorsed Obama or stayed on the fence after Bill and Hillary had raised money for them or appointed them to a political post or written a recommendation to ice their kid's application to an elite school. On one early draft of the hit list, each Democratic member of Congress was assigned a numerical grade from one to seven, with the most helpful earning a one and the most treacherous drawing sevens.

By the way, tonight we want to know what you think about all this. Just log onto our Facebook page, share your comments. And it's time to "Trend at 10:00" on Twitter. You can sound off using the hashtag #Hannity. My address @seanhannity if you want to join us.

But first we check in with former Clinton adviser, radio talk show host now in his own right on my affiliate, by the way, in Philly, WPHT, 1210 AM.

Dick, how are you?

HANNITY: Look, this -- this describes the Clintons that you have talked about and wrote about for years, right, the secret police and whatnot?

Two incidents come to mind. One is that she set up this bimbo list and hired during the '92 campaign Betsy Wright to ride herd on these women who were linked to Clinton, and develop blackmail material on them so that they could be cowed into silence.

And the other is a story that stands out so vividly in my mind, difference between Bill and Hillary. Bill had a birthday party at Rockefeller Center, RCA, and was disrupted by some gay demonstrators. And I met with Hillary a day or two later, and she said, "Did you see those demonstrators?" And I said, "Yes," and she said, "Those tickets were $1,000 dollars each. They couldn't afford them themselves. The Republicans paid for their tickets and put them there."

And I knew enough by then not to argue. I just smiled. And the next morning, I mentioned it to Bill. He said, "We're not going to do that kind of stuff."

MORRIS: And that they completely sat on the whole Iraq story. They let Chris Christie wipe it off the front page. Here you have a potential candidate for president saying that she allowed her political ambitions to get in the way of how she felt and voted and spoke about a measure to protect 100,000 servicemen in combat in Iraq.

When I used to meet with Clinton, he would always tell me, You can never give me advice on foreign policy in person. Always do it behind closed doors, just you and me, because he didn't want anyone to think he was injecting politics into foreign affairs.

MORRIS: And here Hillary puts it front and center.

HANNITY: All right, so there's -- we know there's a built-in double standard, all right, standard operating procedure in the mainstream media. I get it.

What are her biggest obstacles? If she appears to be the appointed nominee in this early date for -- for the Democratic Party, is it going to be, "What difference does it make?" I don't think anybody's going to care what happened back in the Clinton years, do you at this point?

MORRIS: No, I don't think so. But I think that she -- nice thing about the Clintons is their scandals keep updating themselves.

MORRIS: We've had two in the last few weeks. I think that, obviously, in the general, Obama will have terrible ratings and ObamaCare and her identification with it through HillaryCare will be her big obstacle.

But there is a real chance that a left-wing challenger like Elizabeth Warren could derail her in the Democratic primary. There is a new, finite, defined left wing of the Democratic Party that is emerging. Elizabeth Warren is probably the prime example, Bill De Blasio. They want to raise Social Security benefits, reduce the retirement age, increase the minimum wage, limit CEO salaries. And those are not positions Hillary will support. And with Hillary's corporate contributions from Goldman Sachs and others, she's really vulnerable...

HANNITY: Why do I keep hearing whispers -- nobody will really say it out loud, whispers that she had health issues that were far more severe than what was publicly revealed? Have you heard the same things or no?

MORRIS: No, I don't -- I don't know and I don't want to -- you know, I don't have any info. But I'll tell you one of her big liabilities -- the minute she left as secretary of state, the first two things she did was speeches for Goldman Sachs at $200,000 each. The left wing of the Democratic Party is not going to be happy about that. And Hillary's close connections with Wall Street I think are really going to hurt her with the left wing of the party. We could see a replay of '08.

HANNITY: And you have no doubt she's running, none whatsoever.

HANNITY: If she's breathing, she's running? Is that your line?

HANNITY: If there's a pulse, there's a candidacy!

HANNITY: Who wants it more, her or him?

MORRIS: No, she does. But he wants it to vindicate himself. He feels that unless she wins, it'll be like a vindication of his impeachment.

HANNITY: All right. And is Christie going to get out of the pickle he's in?

MORRIS: Well, Christie is not home free because he's given this air-tight denial, and it's not that simple. How did these people come up with the idea? How did they learn about the traffic configuration? Why did Christie hang in there saying there was a study after there obviously wasn't any? Why did he wait five days to talk to his staff after Foye had said that the -- said that there was no study?

Lots of questions there, and every one of those questions has to hurt Christie.

MORRIS: The question is how much. I think he's in trouble. It's so interesting. The two front-runners both got problems right now.

HANNITY: All right, Dick Morris, good to see you. Appreciate it.

MORRIS: Good to see you. Thank you.