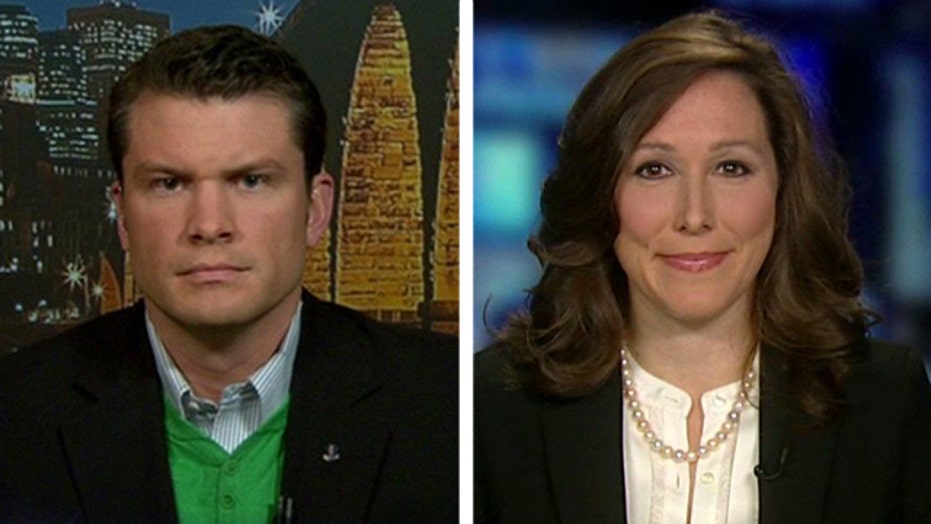 Why veterans are outraged over the budget deal

Proposed plan in Senate to cut benefits for wounded veterans

This is a rush transcript from "The Kelly File," December 17, 2013. This copy may not be in its final form and may be updated.

MEGYN KELLY, HOST: Joining me now Pete Hegseth, an Army veteran of the Iraq and Afghanistan wars and CEO of Concerned Veterans of America, and Dr. Vivian Greentree is a Navy veteran, the wife of a naval flight officer who is currently deployed overseas and a co-founder and director of Research and Policy at Blue Star Families, a charitable group dedicated to empowering military families.

Welcome to you both. And so, in the end they couldn't find the $6 billion to save the cost of living increase adjustments for our men and women in the military. We talked about this last night, but what we didn't know last night was that this was also going to affect the most severely wounded warriors who retire early. I mean it's retirement. It's basically disability they have to go out on very early in their lives because of their devastating injuries and now the government just couldn't find a way to give them a cost of living adjustment on a go forward basis. Pete, put it in perspective for us.

PETE HEGSETH, IRAQ AND AFGHAN WAR VETERAN: No, that's right. And for these medically retired military members, it hits them even more because this cost of living allowance hits them every year that they're in retirement. So these guys and gals would retire early and say they were wounded in combat, they're retired earlier, so it's even more egregious in the way it hits military retirees who are medically disabled.

I would say, Senator Ayotte is spot on. There's plenty of fat to be cut in this budget. We're $17 trillion in debt. We better do something about our spending in this country. But the Ryan-Murray budget deal, A, doesn't do anything about that and B, the only cuts it actually brings about are on the backs of military retirees and medically disabled retirees? There's ways to get at changing the pension and retiree system for the military and we need to do that, not this way, not now. It baffles the mind that this would be OK on Capitol Hill.

KELLY: You know, Doc, we talk to wounded warriors every year and I've been very involved with the Tunnel to Towers Foundation and we talk to the most severely wounded warriors we have in this country. Quadruple amputees injured in Iraq and Afghanistan. And to think that these are the guys, these are the ones we're going to ask to sacrifice as if they haven't sacrificed enough already because the politicians in Washington just can't seem to find the math to work it out any other way? Your thoughts.

DR. VIVIAN GREENTREE, NAVY VETERAN: From our perspective, military families are aware that the entire nation is going to have to adjust for economic recovery. Like Pete said, there are ways to do it. Congress chartered a commission to look at retirement pay and benefits and to cut them in a responsible way. This bill side steps that and doesn't grandfather in current service members and veterans, and so what it does is from the military community perspective, it breaks a trust with them. The military families, our membership and in general are not saying -- it's inevitable that there will be cuts but to do it in a responsible way that engages the commission that was created to do so.

KELLY: Well, let me ask you, Pete, because the response on this from Paul Ryan has been, look, it's a modest reform. It's going to save the overall military some devastating cuts. And those cuts would have potentially harmed our readiness to defend the country. And so, while he doesn't like these cuts either, he says it's sort of, you know, it's the lesser of two evils.

HEGSETH: Well, I have a lot of respect for Representative Ryan. I know he goes into this process wanting to do the right thing. There's no doubt there are other ways -- he knows there are better ways to do this. This was a deal brokered behind closed doors. They're just trying to get something out, provide some continuity, the relief sequester on the military, I understand that. There's some upside on the way the military -- but to do it this way, to sneak something in that doesn't grandfather in military retirees, as she said, it's a great point.

HEGSETH: They're banking on it. Other federal workers, Megyn, nonmilitary, they were grand fathered in. There were small pensions for new employees. But for whatever reason on the military they weren't grand fathered in --

KELLY: Well, let me -- I think Senator Chuck Schumer of New York spoke to that this morning on another channel. Let's listen if we have that sound bite.

SEN. CHUCK SCHUMER, D-N.Y.: Civilian federal employees have been cut, cut, cut, and I think there was a feeling that if they were cut them further which was done, that the military retirees should have about an equal amount.

HEGSETH: It's not an equal amount. In fact sequestration has hit veterans and military families disproportionately more than others so to say the civilian workforce has seen similar reductions, these entitlements, the reforms don't hit the civilian entitlement side the way it ought. And she's exactly right, we're going to have to do more as a military community in light of the debt and deficit problems that we face. And as part of a big agreement to be involved in something, absolutely. But to be part of a deal that doesn't address debt and deficit, that's a problem.

KELLY: Yes. Thank you both for being here with your perspective.