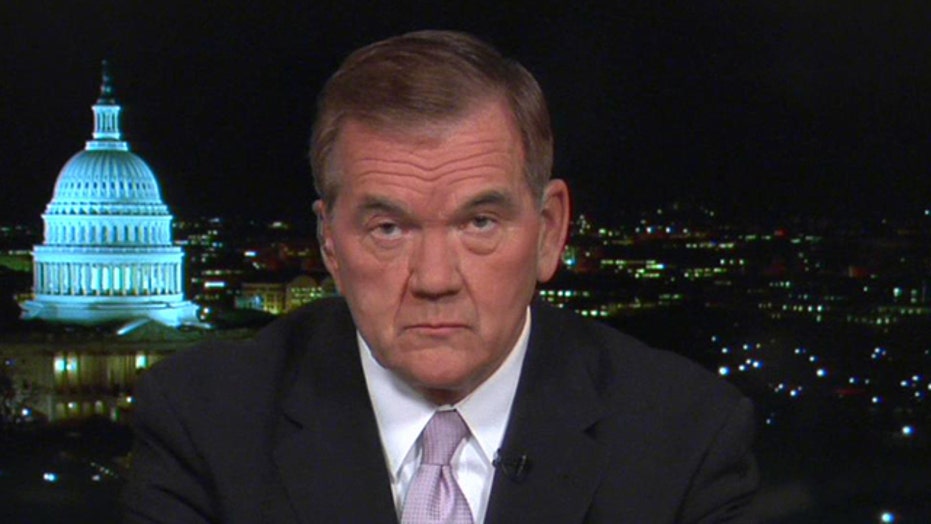 Tom Ridge on why the Malaysia Airlines tragedy matters

This is a rush transcript from "Hannity," March 11, 2014. This copy may not be in its final form and may be updated.

SEAN HANNITY, HOST: Joining me now for more on this developing story is former Homeland Security Secretary Tom Ridge. Mr. Secretary, good to see you. Thanks for being with us.

TOM RIDGE, FMR. HOMELAND SECURITY SECRETARY: Sean, nice to join you again. Sorry it's under these circumstances. Rather bizarre, isn't it.

HANNITY: How often does a plane like this go missing for four days, not a trace? Your thoughts.

RIDGE: Well, you know, it's actually amazing to this date, there's so many people trying to find out what transpired, and there are just so many conflicting reports. But the latest report about a -- the air force, Malaysian air force, tracking it 350 miles off course, perhaps on the other side of the island, and the transponder op would suggest that perhaps there's a pilot in control who had terrorism intent. I mean, I don't think we ought to dismiss anything, but it's rather bizarre at this point, particularly with so many conflicting opinions to date.

HANNITY: Well, what they are reporting -- they're talking about they tracked this for 350 miles. A pilot would have to purposely to turn off the transponder.

HANNITY: I want people so understand that. On 777, that is -- I talked to one of the pilots today. And what the military believes is, now that it's been missing for four days, that it flew hundreds of miles to the west after its last contact with civilian air traffic control. And what they believe is that flight 370 disappeared and it changed course, they're saying, took a lower altitude. And that would tell me that something was going on in the cockpit one way or the other, right?

RIDGE: It would certainly seem that way. I mean, if -- again, if the Malaysian air force report is accurate. You know, it's rather remarkable. They've got hundreds of ships and planes, I think about 300 and 400 miles away, looking for debris in the water. So we really got to get our stories together to figure out. You and I know it's a mystery and a tragedy. The tragedy will live forever, but one of these days, we're going to figure out what transpired.

HANNITY: You know, I remember when you were Homeland Security secretary, that when you would change the terror alert or threat assessment alert, that some people would accuse you of doing it to scare people.

HANNITY: But I don't think that was ever the case, obviously. But the important thing here is we've got real issues, especially with passports, getting onto this airplane. None of the stories that I'm hearing -- purchased by cash, one-way tickets by an Iranian, given to other people, people leaving the flight after they checked into the flight -- all those things are concerning to me.

RIDGE: Well, you know, in international commercial aviation, there are very few countries that go the extra mile to check the passport against the Interpol's record of 40 million stolen passports. I think the U.K. does it. Certainly, the United States does it. But beyond that, it's a pretty loose network of checking with regard to the passports.

And then beyond stolen passports, Sean, I will tell you, as secretary, I've seen some fraudulent passports. You'd need a microscope to conclude that they were fraudulent.

So while commercial aviation and international travel is open to everybody these days, it's still a fairly poor system, and so that either a stolen passport, a fraudulent passport can get you on an airliner in most countries around the world.

At the end of the day, we're going to have a biometric system like we have in global entry. When I -- when you come in from overseas, you put your passport in. It's got your fingerprints. You put your hand on the device, and it says, You are Sean Hannity. Bingo. We got it confirmed. Then you move on. One of these days, international commercial aviation is going to move in that direction.

HANNITY: What do you make, A, of the cell phones? The families say their phones are still ringing, not going directly to voicemail, or they haven't run out of batteries. By the way, batteries can last a fairly long time. And the teenage passenger -- this is the Australian young woman who said back in 2011, with the same pilot, that he actually just opened up the cockpit, let her in, which wouldn't have made sense.

RIDGE: Well, it wouldn't make sense, but presumably, it's happened. Ad you've traveled around the world or as I've traveled around the world, depending on the airline, the security measures relative to getting on the airplane, in addition to security measures while you're on the aircraft itself, do vary. Technically, there are international standards, but I think from my experience and I suspect with your experience, they're not always followed universally, and that again, given the globalization of travel and commercial aviation, there's got to be some international standards which have to be enforced.

And obviously, if you had a co-pilot on a previous occasion who was letting civilians into the cockpit, shouldn't have been suspended, should have been banned. Shouldn't be a commercial airline pilot.

HANNITY: Last question. Because of your position as homeland security secretary for a long time, is this a wake-up call for America? I've always thought that we need to become more like the Israelis. I think they've got the best system of anybody out there. You may agree or disagree, but I think...

RIDGE: They've got a great system. Oh, Sean, yes, they -- they've got a marvelous system. The only thing is, is they only got one major airport. We have over 400 airports.

But the bottom line is, is that this is a reminder, and it was a persistent threat when I was secretary. I suspect it lasts (ph) today. It's very unlikely that the terrorists would take an airplane and turn it into a missile unless they controlled the cockpit.

But aviation is still potentially a target and will be forever more. That's why it's necessary to really tighten up these particularly international flights.

HANNITY: Is it possible we may never know what happened to this airplane? Is that possible?

RIDGE: This day and age, I doubt it. It just may take us one heck of a long time to figure it out.

HANNITY: All right, Mr. Secretary, thanks for being with us. We appreciate it.

RIDGE: Always good talking to you, Sean. Thank you.