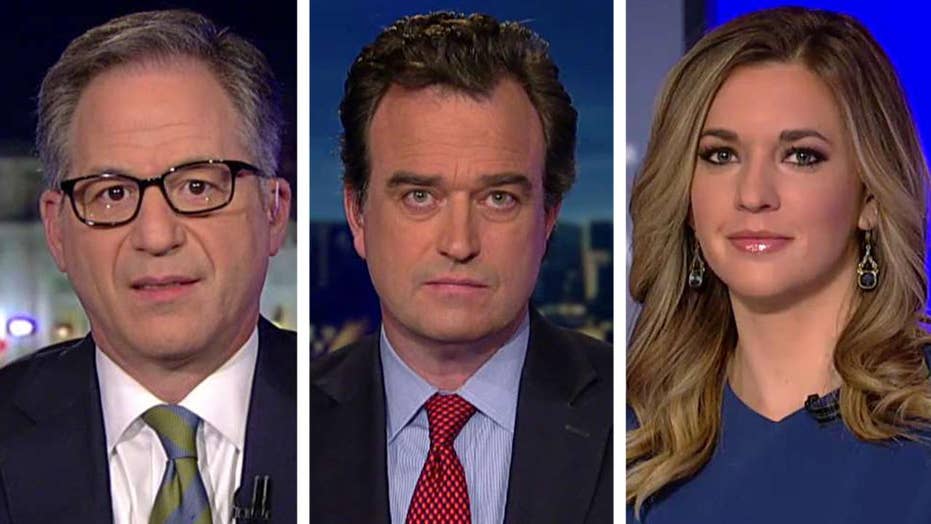 Why the Alabama Senate race is a big test for GOPers

This is a rush transcript from "Special Report with Bret Baier," December 11, 2017. This copy may not be in its final form and may be updated.

RAY MOORE, REPUBLICAN ALABAMA SENATE CANDIDATE: I think he is viciously attacking me because he knows his values, his standards are not what the Alabama people find dear to them. He naturally wants to take down my character and lift himself up without addressing the issues, like immigration, like health care, military readiness, taxes.

BRET BAIER, ANCHOR: The Moore campaign wouldn't confirm that he was in Philadelphia. He's a West Point grad, may have been at the Army-Navy game but we don't have confirmation of that. We do have confirmation of a new poll out today by FOX News in Alabama, and it was an eyebrow raiser for some, showing Doug Jones, the Democrat, up 10 points now. And you can see the shift from November, eight points to 10 points now in our poll.

This is different than they Real Clear Politics average of polls, recent polls, that has Roy Moore still holding an edge of 2.2 percent. As you go back into our poll, vote by party identification in Alabama, again, out today, you see the Democrats holding strong with Jones at a 90 percent, Republicans 81. Independents is where the shift is in our poll it, and again it is plus or minus 4.5 percent in this poll

FOX News, believe the allegations against Roy Moore, do you, that was the question. And you can see all likely voters, 39-33. And the different numbers with the GOP voters, but still unsure and 26 percent.

So as we get ready for this Alabama race, let's start there and bring in our panel: Charles Hurt, opinion editor for The Washington Times; Katie Pavlich, news editor at Townhall.com, and Charles Lane, opinion writer for the Washington Post. OK, you look at these numbers, Charlie. What do you see?

CHARLES HURT, WASHINGTON TIMES: Well, I think that in particular the Fox poll suggests that we really have no idea what is going on down there and how it's going to turn out.

I think it is very interesting that the split between those who believe the stories and those who don't believe the stories and those who are not sure are almost all within single digits of one another. And I think basically that probably bodes well for Roy Moore because what it comes down to is that people are going to say I don't know what to make of all this, so I'm going to vote on the politics. I'm going to vote on the issues. And if they vote on the issues, obviously Roy Moore walks away with it. If they vote on character, then he probably won't win.

BAIER: You have, Katie, national figures obviously playing a role here. President Obama, Vice President Biden cutting and calls for Jones. Charles Barkley now and Cory Booker campaigning, obviously trying to gin up and get to the African-American vote energized to get to the polls. The turnout question is really a big one.

KATIE PAVLICH, TOWNHALL.COM: Former President Obama is now involved in this campaign as well, urging people to get to the polls tomorrow night. And the truth is we won't know what happens until they do. But this is a big test for Republicans in a lot of ways. If Roy Moore wins, will the Senate decide that they are going to keep him up from being seated, and what precedent does that sets in terms of how they move forward on that? What does that do long term to the GOP brand and them deciding that they know better than the voters of their state?

But in terms of turnout tomorrow, the 10 percent number on the undecided and the independent voters indicates to me that people are going to go in there and make their decisions at the last minute at polling time because they are just not sure yet who are they are going to vote for.

BAIER: Chuck, well, a couple of thoughts occur to me looking at those really interesting poll numbers. They must be picking up on something like your FOX result over there in the Democratic internal polls because they are sending all these big guns into the state, not just the robo-calls from the former president and vice president but somebody like Cory Booker who is thinking about running for president and probably will run for president is staking his personal prestige on this race and hoping to claim credit for an upset by Doug Jones. So all that together tells me Doug Jones has a real fighting change.

The second thing is that Richard Shelby's comment was so interesting.

BAIER: Let me play that real quick from the weekend.

LANE: Yes, and as staunch of a conservative as they come. And it occurred to me that's the question may be how many Richard Shelby's think-a-likes are there in Alabama? How many Republicans are going to just sit this one out, and not vote for Doug Jones necessarily, but not go there with Roy Moore? And if there are a lot of them, well, that might help Jones too.

HURT: I think on key things Democrats will definitely keep him in line. Obviously his record on a lot of things is more conservative, but at the end of the day one of the most important issues is going to be abortion, and he is not with conservatives on that.

LANES: He instantly becomes a vulnerable red state Democrat, like the one, Heidi Heitkamp from North Dakota or Claire McCaskill --

BAIER: This race will be over in two years.

LANE: Exactly, so he will be instantly trying it to walk that line, and if you are Mitch McConnell thinking about your Senate, you have a lot more leverage over a guy like that then you are ever going to have over Roy Moore.

PAVLICH: And I think he will be getting an invitation to the White House to sit down with President Trump to talk about some of the things that they have in common.

BAIER: I just wanted to play it out that way, if that holds. I want to play the sound bite of some of the president's accusers and the White House response.

RACHEL CROOKS, TRUMP ACCUSER: I wanted to believe that as Americans we can put aside our political inclinations and admit that some things in fact do transcend politics, that we will hold Mr. Trump to the same standard as Harvey Weinstein and the other men who were held accountable for their reprehensible behavior.

SAMANTHA HOLVEY, TRUMP ACCUSER: They have investigated other Congress members, so I think it only stands fair that he be investigated as well.

SARAH HUCKABEE SANDERS, WHITE HOUSE PRESS SECRETARY: The president has firsthand knowledge on what he did and didn't do. He can speak directly to those, and he has and he's addressed them, and I don't have anything further to add.

BAIER: Katie, you have U.S. ambassador to the U.N., a Trump administration official, saying that these allegations should be heard, these women should be heard. They came out today telling their stories again. Obviously they were told prior to the campaign. The White House says they're holding the line against these accusers.

PAVLICH: It is a problem for the White House. It was a tough briefing today for them to have to answer those questions, and they got asked about it from I think three or four different reporters. Certainly it is not going to go away especially as Capitol Hill continues to grapple with dealing with this in an accountable, transparent fashion.

However, she does have a point, Sarah Sanders, when she says these things were laid out on the table before the election. We had an election. They voted for President Donald Trump, and he is seated in the White House today. We've moved passed it. And Democrats have pulled this over this before too. They elected Bill Clinton twice. And it is becoming more and more apparent to me that the sacrificial lamb of Al Franken getting taken out is actually just a way for them to be able to take the political high ground despite not doing it for three decades to be able to say that Donald Trump also has to resign as Senator Gillibrand said today.

BAIER: Very quickly, I only have 30 seconds, but the fact that we have the story of this DOJ official's wife working for Fusion GPS on the Trump dossier and we are just finding out about this, isn't this shocking?

HURT: It is. It read like a John le Carre novel. You hear these things, there is no way it can possibly be true, and then you find out it is true. It is like everywhere you scratch you find more swamp.

BAIER: We are going to stay on all aspects of it, the allegations of collusion, the investigation by the special counsel, and what we are learning really day by day about how the DOJ is handling all of this. We are expecting to hear from the attorney general and the FBI director tomorrow on a number of different fronts, and I bet you this will be one of them.