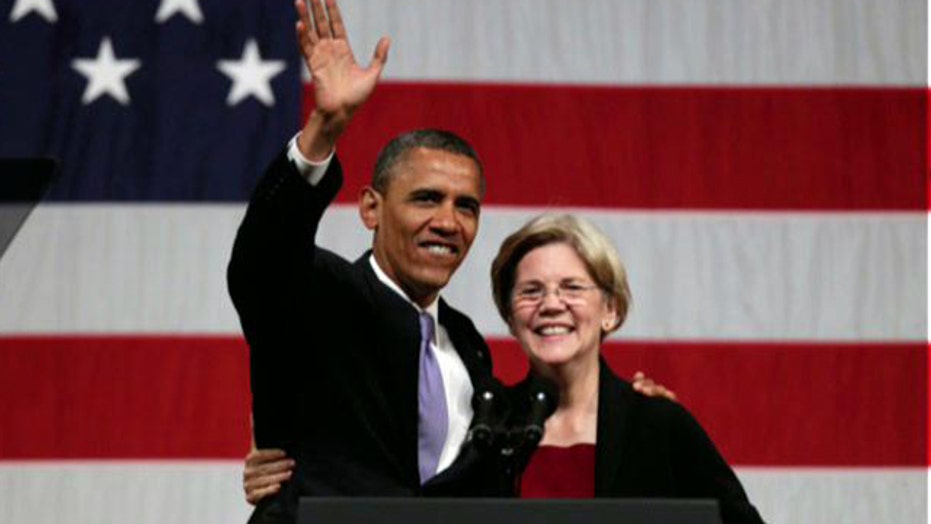 Why Obama may be secretly backing Sen. Warren for 2016

This is a rush transcript from "The Kelly File," July 7, 2014. This copy may not be in its final form and may be updated.

ED KLEIN, AUTHOR: Valerie Jarrett who, of course, is the consigliore in the White House. And she really has huge power there, has urged Elizabeth Warren to throw her hat into the ring because Obama thinks, the president thinks she would carry out his legacy a lot better than Hillary Clinton.

MARTHA MACCALLUM, GUEST HOST: What do you think? That was Ed Klein who is reporting President Obama is secretly promising to support Massachusetts Senator Elizabeth Warren if she decides to throw her hat in the ring for 2016 for president and that he would not support his former Secretary of State Hillary Clinton. Warren is a former Harvard law professor, she's been very outspoken against Wall Street and the one percent like this.

SEN. ELIZABETH WARREN, D-MASS: I hear all this, you know, well this class warfare and whatever. No. There is nobody in this country who got rich on his own. Nobody.

MACCALLUM: Remember that? Joining me now is Karl Rove a Fox News contributor and founder of American Crossroads. Karl, good evening. Good to have you here tonight.

MACCALLUM: So, what do you think about Ed Klein's theory there?

ROVE: Well, it's based on some reporting. I'm a little bit dubious that this ends up being a reality. But right now, this serves -- it serves several purposes. One purpose that the hard left of the Democratic Party is all wired up about ending income equality and they love Elizabeth Warren who's a populist, who's attacked wealth and Wall Street and made comments like you saw earlier, enthusiastically endorsing redistribution. So, why not get her a little buzz on what's going on for her in order to pressure Hillary Clinton to move to the left. Don't let Hillary Clinton take the left wing of the Democratic Party for granted.

Also a part of it is probably that, look, Hillary Clinton has had a bad six weeks. Her book launch has been dreadful. It shows that she hasn't learned much from 2008. She's leaving a sense that you owe this to me. I'm due this. This is mine. She's been underperforming. No vision. Tone deaf, thin skinned. I mean, people are saying can we do better that this? But I'm a little reluctant to believe that there is a --

MACCALLUM: That the president has given any kind of assurance to Elizabeth Warren.

You know, in terms of the president's feeling about Hillary Clinton, do you believe him when he says that, you know -- he hasn't come out endorse anybody, of course, 2016 is a while away. But do you think he would be supportive of her, that he would really give her 100 percent of his effort?

ROVE: Well, first of all, how good is it gonna be for him to give 100 percent of his efforts in 2016, if he keeps going like he's going? But, yeah. I do think he's probably inclined there. Think about this, there are two -- there's a super PAC priorities, USA action. Jim Messina, Obama's campaign manager is co-chairman of the group. Buffy Wicks is the executive director, she was an aide to Obama in the white House and a key part of his campaign. There's another group called Ready for Hillary that's out there. Mitch Stewart who headed the Battleground States for President Obama and Jeremy Bird who headed his field operation are, again, involve in those groups. I don't think key people from Obama's most recent campaign would be flowing into things that are strongly for Hillary unless they gotten a green light from the White House who was permissible.

MACCALLUM: All right. Karl, thanks a lot. Good to see you.

ROVE: You bet. Thank you, Martha.