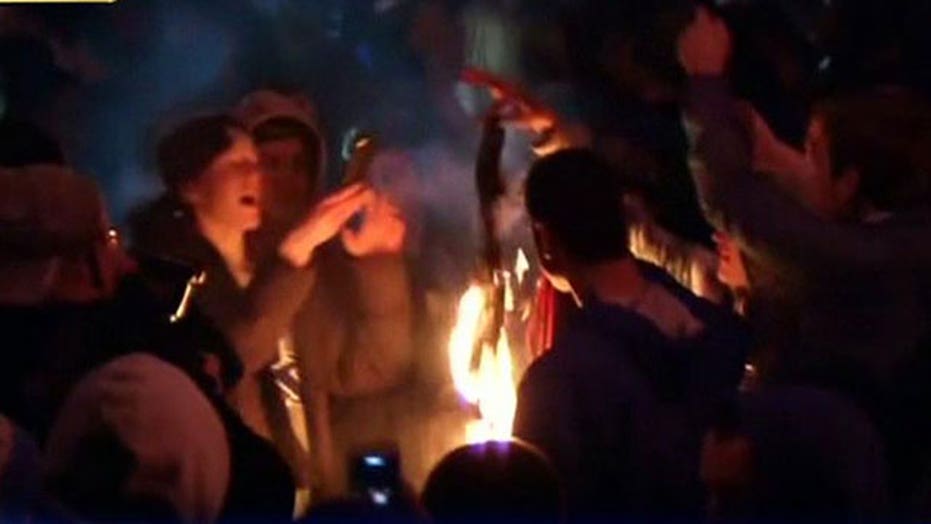 Why do fans resort to violence after big sporting events?

This is a rush transcript from "Hannity," April 8, 2014. This copy may not be in its final form and may be updated.

SEAN HANNITY, HOST: It was a nail biter to the finish, but in the end, the UConn Huskies defeated Kentucky's Wildcats 60 to 54 in the NCAA national championship game last night. But what happened off the court after the game is getting just as much attention.

Back in Connecticut, fans celebrated on campus by wreaking havoc. According to a university spokesman, windows and streetlights were smashed. Police there arrested 35 people, 20 of them were UConn students.

And then in Kentucky, law enforcement was forced to use tear gas to control the rowdy and disappointed crowd. Officials said at least 17 couches were set on fire, and there were approximately 18 injuries resulting in seven arrests.

Now, sadly, this is simply the latest in long line of post-championship violence, which is why tonight we're examining what exactly fuels this bizarre phenomenon. Here to break it all down, Arizona Cardinals placekicker, our friend, Jay Feely, is back. Radio talk show host Dr. Gina Loudon is back. And senior entertainment reporter for Hollywoodlife.com and VH1 host Chloe Melas is with us. Did I say that right?

All right, look, I understand everyone identifies with their team. When you were with the Jets, I was your biggest fan. Now you're my biggest enemy.

HANNITY: You know, we all identify with our sports teams and we care deeply about how they do. Why always the violence that happens again and again after a game?

JAY FEELY, ARIZONA CARDINALS: Well, we love our sports and we celebrate them, but we need to celebrate them in the right way. I think part of it is this entitlement mentality that we're bringing kids up with lack of accountability.

FEELY: They don't feel like the rules apply to them, and we kind of tell them that in college. You know, college itself is inherently narcissistic, and we breed this mentality that no one can tell you right or wrong. There are no moral absolutes. And so that creates a volatile mix.

HANNITY: Chloe, you went to Auburn. My wife graduated from Alabama.

MELAS: Here's the thing, though. I didn't see this at a school with 30,000 kids at Auburn. We rolled (ph) Tumor's Corner (ph) with toilet paper every time we won a game. We weren't lighting couches on fire. So I don't really understand the mentality personally behind the violence...

HANNITY: Why are you wrecking somebody's car or a cop car?

MELAS: Well, you know, I spoke to, actually, a psychologist today named Dr. Carol Lieberman (ph), and she told me that the reason is that if you were to do this just by yourself, Sean, you would get in trouble. But when you are with thousands of people, you say, It's thousands against one, I am not going to get caught for doing this.

MELAS: And it has to do with adrenaline and feeling pride.

HANNITY: Dr. Loudon, you deal with this. Tell us. What's the psychology behind this?

GINA LOUDON, RADIO HOST AND PSYCHOLOGY EXPERT: Yes, you know, people want to say, Well, there's something different about this generation. This generation has just degenerated. The brains must be different to engage in this mob mentality.

HANNITY: The brain's not different.

LOUDON: The difference is that we have -- we have taken God out of schools. We've taken personal responsibility out of life. These kids do have an entitlement mentality...

HANNITY: So the culture has changed.

LOUDON: The culture's changed. But more than anything, they have no -- no wheelhouse to go into to understand what honorable behavior is.

LOUDON: That's a thing of the past.

FEELY: Yes, they're told, whatever I choose to do, whether it's drugs or drinking or sex, I make that decision, so it's OK. So they feel like they can do anything they want to anybody.

HANNITY: Yes, but we did this whole series on spring break, and it's the same thing going on there. I mean...

LOUDON: But this is by design, Sean. This is -- this is exactly what this government wants. The government has the answer for you...

HANNITY: How do you blame the government? I mean...

LOUDON: Because they -- well, OK, but the government has sent a clear message, first of all, that everyone's entitled to everything and everybody gets a trophy. So clearly, the answer to this, really, is that we just outlaw winning...

HANNITY: Wait a minute. I blame the parents.

HANNITY: You know, because the bottom line is -- and my sister, Michaela (ph), literally told me that at Penn State, everything we showed on spring break was every Thursday, every Friday and every Saturday and Sunday night.

FEELY: I went to Michigan, and Michigan's a very liberal campus. We won a national championship my senior year in 1997. We didn't see this. But it -- my kids -- I have four kids. You have five kids. I would be distraught...

LOUDON: And your kids wouldn't.

MELAS: I don't have kids. I'd be upset, too. But here's the thing, though, guys. People are drinking at these games, and people are going out afterwards and just having so much fun. And they think that this is good fun, but it's not. It's harmful and they're hurting their school that they love and that they have pride for. So it actually doesn't make much sense, if they were to think about it in a normal mindset.

But these people -- the kids knew that this was going to happen. It was premeditated. The student told me that everybody was talking about the fact, if we win, we're going to flip over cars.

HANNITY: And burn them and put them on fire.

LOUDON: So there's no sense of responsibility!

MELAS: But this is also nothing new, though. You see, you know, adult men acting like this after the Lakers win, you know, where people are lighting couches on fire in California after the UCSB games, you know. I mean, this is nothing new. And I don't know why this is a sense of pride.

HANNITY: I don't know. I think it's now almost mainstream. And that's the problem. After the World Series, Boston, last year...

FEELY: Yes, it builds upon itself.

FEELY: And you see other people do it, and so they figure they can do it, as well.

HANNITY: Yes. Does happen when the Cardinals lose?

HANNITY: Oh, you're going to win? I'm pulling for your old Jets...

HANNITY: I don't know. All right, guys, good to see you. Thank you. Appreciate it.