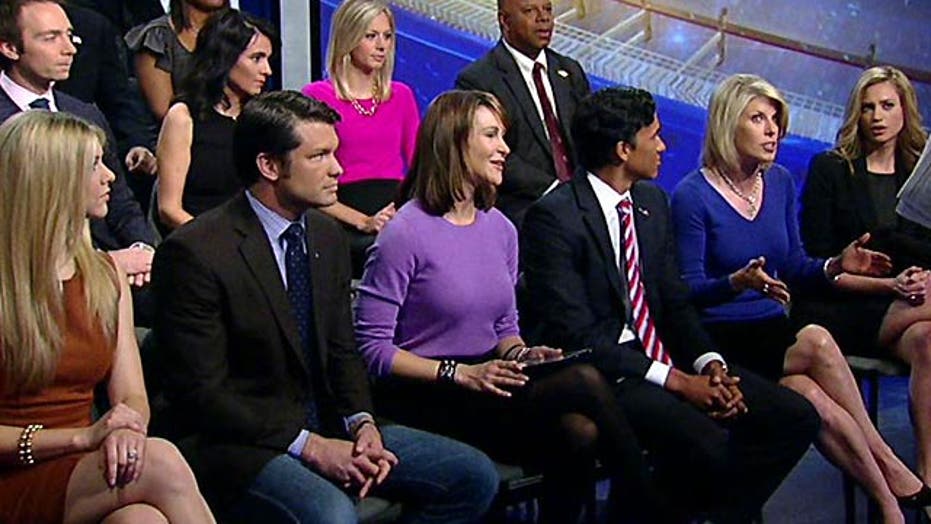 Who should be held accountable for the ObamaCare rollout?

This is a rush transcript from "Hannity," October 18, 2013. This copy may not be in its final form and may be updated.

SEAN HANNITY, HOST: Joining me now with reaction to this and much more, our studio audience. Oh, smart people. Hi, Tamara.

HANNITY: Show of hands. Who wants Sebelius fired? Noah, I'm surprised. I'll get to you in a minute. Who doesn't? You're agnostic.

HANNITY: Let me bring up one point. We -- I talked to a tech guy, graduated from Harvard, today on my radio show, and he has his own business. We spent $634 million taxpayer dollars, Penny -- $634 million. He thinks he could have had a better system -- he said he would be embarrassed if he chose -- if he spent more than a million.

PENNY LEE, DEMOCRATIC STRATEGIST: Look, we have a probably with the federal IT procurement system. I will give you that. I mean, if you look at Recovery.com, that was actually built with $4 million. So there is a big problem out there already on what we have for procurement. But one -- one exchange or one site isn't going to be telling...

HANNITY: Who pays $634 million and has three years and screws it up that bad?

LEE: I agree with you. I agree with you that we have a problem with our federal IT program. And hopefully, this will demonstrate that we actually need to overhaul it so that we do have people...

ELLISON BARBER, WASHINGTON FREE BEACON: There's also a reason for why people need to be held accountable, because there was also a report in The Washington Post with Representative Robert Andrews, who's a Democrat from New Jersey, saying, I told the administration that there were these technological problems months ago, and they decided to proceed with that October 1st deadline.

So someone needs to be held accountable for making the decision that that deadline was more important to make than put out a functioning product. So someone should be at least answering questions about it.

HANNITY: Yes. All right, here's a question. If we -- Tamara, I'm looking at your face. I'll ask you this directly. If any business, if Apple, if Microsoft, you pick any big business -- if they spent $634 million, they had three years to get this up and running, and people telling me they're using 10-year-old technology and it failed this -- this -- this dramatically, why wouldn't that person be fired?

HOLDER: Absolutely. People were trying to...

HOLDER: Let me -- let me finish. People are trying to sign up. We know that people wait in lines for iPhones and then they find that there are glitches.

HOLDER: There are people waiting in line...

HOLDER: Hi. Good to see you. You asked a question that...

HOLDER: ... your source -- I mean, I'd like to know, wouldn't the American people like to know who your source is? All the millions of people who are watching the show...

HANNITY: The source for what? Which part?

HANNITY: Look, I'm telling you I have talked to more tech people that understand set-ups like this. They could do it cheaper, faster and it would more efficient than it is now. And I'm looking at -- the average person out there...

HOLDER: You know what? I can do your show better than you! But that doesn't mean I can. Anybody can say that! I can do the site better!

HOLDER: ... but two weeks into it? You've been complaining about it before it's even started.

HEGSETH: The biggest indictment of this law is that Congress and others carved themselves out of it from the beginning!

HEGSETH: Because they knew it was going to be a disaster!

HOLDER: Repeal and amend it.

HANNITY: Hang on. But you're not addressing the bigger question. The bigger is, this is a boondoggle that is (ph) every person out there contributed to that $634 million failure. Now, you know what? $634 million in a world of billions and trillions that we discuss now may not sound like a lot of money. But that's money out of the pocket of carpenters, electricians and plumbers and receptionists and lawyers and doctors.

DAVID WEBB, FOX CONTRIBUTOR: Sean, I've actually worked in the federal government in an automation position dealing with a lot of data, the type of data the Census Bureau carries and has to transmit during the decennial census. Comparatively, this is one of the biggest boondoggles. When I have dealt with data, it has come from old SQL database to Windows database and having to do those kind of transfers. What you see here is inefficiency.

HANNITY: I have a question...

WEBB: ... taxpayers not being served if you accept the ObamaCare premise that we're here to serve you!

HANNITY: Is there any one liberal here? Because we've split it up equally...

HANNITY: ... any one liberal here that thinks that Kathleen Sebelius should be held accountable and fired for this debacle?

KISHA HEBBON, DEFENSE ATTORNEY: Well, I think she should be held accountable because, obviously, something is wrong. You pay this much money and then there's all these glitches. Now, and that's not to say that that can't happen in any business. But I don't think she should be fired. I think they need to...

UNIDENTIFIED MALE: ... she will be fired!

HEBBON: But it's not just her decision! That decision can't -- yes, accountability...

HANNITY: Wait a minute. Why not?

HEBBON: ... not just one person. You need to look at who was involved in that decision. This one woman can't be held accountable for the entire government.

GRETCHEN HAMEL, PUBLIC NOTICE: This is just -- in any other instance, they would be held accountable for what fell underneath their responsibilities. But this is where the administration put politics before people. They knew months in advance, like Ellison said. And instead of consulting outside tech consultants, they brought in campaign techies because they were worried that this would get out. That's how hard they've...

HANNITY: It's actually more sinister than that. They actually have a way to register voters on this whole thing, sort of like the "motor voter" law.

HANNITY: I love how you distract from the issue!

HOLDER: Let me finish! You're talking about a couple hundred million dollars, which is a lot of money. That shutdown cost us $24 billion, at least, the American people!

HAMEL: Ted Cruz put his constituents first. And he went to Washington saying that he was going to go there and get rid of ObamaCare. He put his people before politics...

UNIDENTIFIED MALE: Who are his constituents? He has 40 million Texans...

UNIDENTIFIED MALE: So he put his constituents first...

UNIDENTIFIED MALE: ... his constituents are...

HANNITY: We got to take a break.