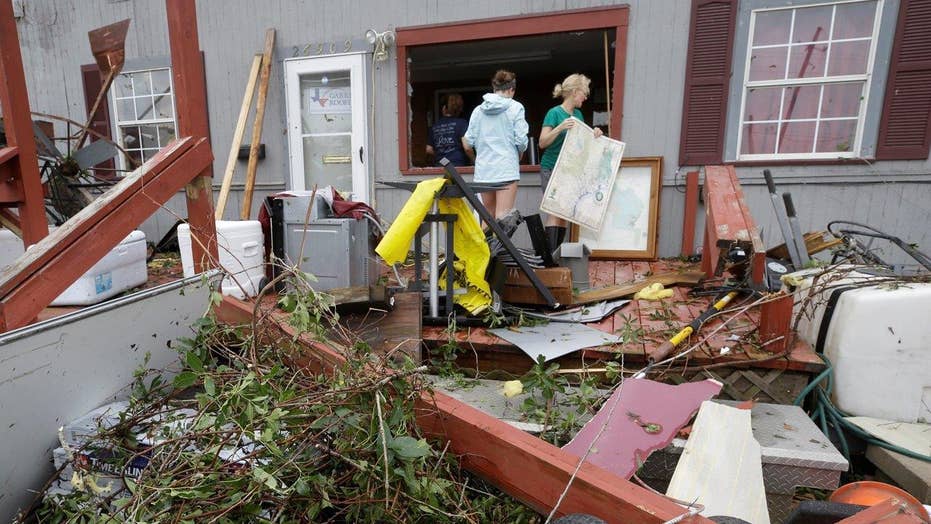 Who pays for destruction caused by Harvey?

This is a rush transcript from "Special Report with Bret Baier," August 31, 2017. This copy may not be in its final form and may be updated.

TOM BOSSERT, HOMELAND SECURITY ADVISER: The administration has been pretty clear that we'd like to see some responsible reforms to the National Flood Insurance Program. I do think now is the time to debate those things as we need to help people who have pending claims, but we'll debate that late fall as we come out with good policy ideas to help move that back into a risk-based private sector, hopefully support a solution.

BRET BAIER, ANCHOR: Tom Bossert, the homeland security advisor at the White House today talking about the National Flood Insurance Program. This as viewers and voters who were polled said the president's response to hurricane Harvey, approve 44 percent, disapprove, 26, unsure, 30 percent. The National Flood Insurance Program, by the way, even if people had insurance, is underwater itself. It was created in 1965, really the only source of flood insurance for Americans. Last reauthorized in 2012 and it's up again September 30th. It currently is in the whole almost $25 billion, and that directly coincides with the debt ceiling that is coming due. So you have all of that as Congress gets back on Tuesday, plus the funding itself for the recovery.

OK, Jason, first before we talk about the flood insurance program, the funding battle, you heard the vice president there in that press conference saying Congress is going to figure it out, it is going to be bipartisan. But we have seen these things before, and this is going to be a huge disaster recovery effort.

JASON RILEY, MANHATTAN INSTITUTE SENIOR FELLOW: It will be a big effort, but I think the money will be there. I think that the political optics of not sending the money I think would be too damaging to not get on board here. So I think we will see some bipartisan support for doing this.

And I think that the flood insurance program will be allowed to increase its debt, will be able to borrow more from the treasury. He'll get the money. And the only, like Mr. Bossert said, the only issue here is going to whether some fiscally responsible lawmakers attach some serious reforms to it this time.

It would be hard to come up with a program more in need of reform. Around 50 years, we have had the federal government sending taxpayer backed insurance to people who build in flood prone areas. It makes no sense whatsoever. All the wrong incentives are in place. All that has led to his more building in these areas because the owners know that if there is a flood someone else is going to be picking up the tab. So the goal here should be to get the federal government out of the flood insurance business and let the insurers price this to market.

BAIER: Anna, the White House was asked, the treasury secretary was asked whether the administration will push to tie the debt ceiling increase to a funding request. They wouldn't answer the question. It's a process, and Congress will get into it, but it's an interesting prospect.

ANNA PALMER, POLITICO: Absolutely. Sources on Capitol Hill what they wanted to try to do is tie a really neat bow on all of these problems that they have, funding the government, raising the debt ceiling, and trying to find this disaster relief because you have a coalition that has to vote for it if you have all of those three things. It's going to be very difficult. Right now we have a story up that just broke saying that the capital, the Senate, House Republicans want to actually pass a small package of disaster relief as soon as this next week, which means that wouldn't happen. So you have a lot of problems coming up here in the next several weeks.

BAIER: But there are the hawks up there, the deficit hawks, Charlie, who say we are approaching 20 trillion in debt and we have to stop the bleeding somewhere. How is this all going to work?

CHARLES HURT, THE WASHINGTON TIMES: And a lot of those deficit hawks are from right there in Texas were so much of this is going on. But I think that Jason is probably right about this. This is why people hate Congress, because you have this massive problem like flood insurance program that they never address the problem.

HURT: They keep punting it, and then every time there is a catastrophe like this, that's everybody running around worried about -- trying to figure out how to do it in an emergency environment. Nothing brings lawmakers, Democrats and Republicans, together like spending money. And so I would imagine that they will probably come up with something bipartisan.

But hopefully people like Ted Cruz, John Cornyn, who have a lot of sway in the Senate will -- why is this an emergency that the federal government is protected from having to put some skin in the game? If this is an emergency, the entire federal bureaucracy should be forced to put some skin in the game and give up something. Why not cut to offset what everybody wants to give people in Houston?

BAIER: And there is the question that we will start to get the answer to Tuesday. Meantime, on DACA and the so-called Dreamers, word is that the president is going to end that program with some caveats.

PRESIDENT DONALD TRUMP: In a Trump administration, all immigration laws will be enforced. We will immediately terminate President Obama's two illegal executive amnesties.

It is a very, very tough subject. We are going to deal with DACA with heart.

REP. MIKE COFFMAN, R-COLO.: Their parents and their relatives made the decision to come here. They didn't knowingly violate the law.

SEN. STEVE KING, R-IOWA: They didn't all come as kids. Some did. Many didn't. They are up to 37 years old now.

UNIDENTIFIED FEMALE: President Donald Trump, it is your time to protect and defend DACA.

BAIER: Sources are telling our people at the White House that the president as soon as tomorrow is going to possibly end the Obama era deferred action for childhood arrivals program, kind of grandfathering in the people who are here, which is the caveats.

RILEY: Exactly. I think he'll end the program, meaning no more people can have that designation. But the people who have it now will be able to keep it, although they won't be able to renew it.

And I think Trump is playing maybe the long game here in that he can use this DACA as a bargaining chip for getting other immigration items on his agenda, such as funding for a wall and so forth. So I think that is the way he's looking at this issue. And by doing it this way, he gets to avoid putting potentially around 800,000 people in a state of possibly being immediately deported. He won't have to do that if he allows them to grandfather out.

BAIER: They insist at the White House that the decision was not final yet. But, quickly, your thoughts?

PALMER: I think all signs point to he is going to end DACA, but you're already saw Mike Coffman who you played a little bit of sound before. He has said on Twitter that he is going to do a discharge petition in the House which would mean they could bring up a vote on an act that would actually allow these Dreamers in an amended form to stay. I think you will find the widespread support in both the House and the Senate on this.

HURT: The problem all along has been that President Obama did this as an extralegal action. He didn't have the constitutional authority to do it. He himself admitted that he didn't have the authority to do it. If Democrats wanted to do it, they ran all the tables in Washington after Barack Obama won the presidency. They could have done it then. Instead they gave us Obamacare.

BAIER: Another battle to come and Congress come Tuesday. Panel, thank you.