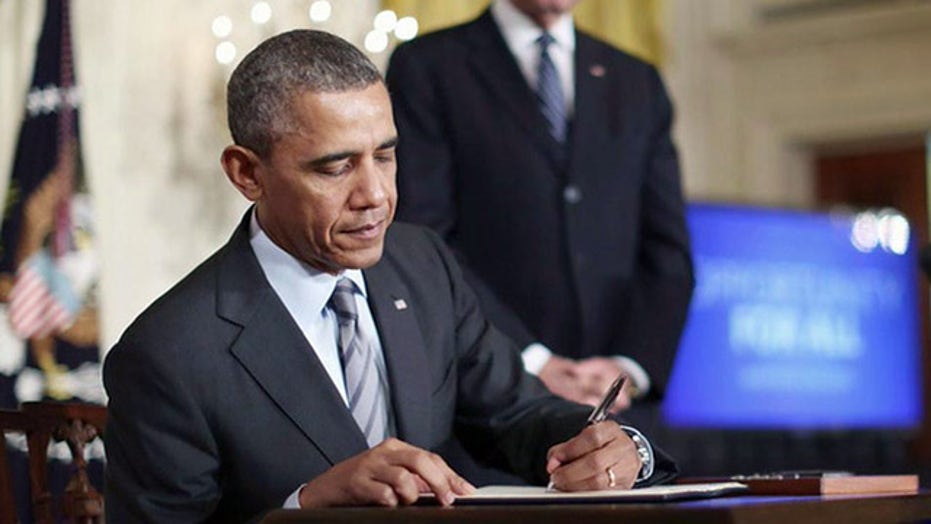 This is a rush transcript from "The Kelly File," April 8, 2014. This copy may not be in its final form and may be updated.

MEGYN KELLY, HOST: Breaking tonight, lots of fall out after the White House is accused of a stunning display of hypocrisy as the administration admits that it is failing to meet its own demands when it comes to who gets paid what.

Welcome to "The Kelly File," everyone. I'm Megyn Kelly. Hours ago, the president signing an executive order to encourage federal government contractors to pay men and women the same money for the same work. But over the last 48 hours, the administration has had its hands full explaining the pay gap right inside of 1600 Pennsylvania Avenue.

UNIDENTIFIED MAN: Why is the median salary of women in the White House is 88 percent of men?

But it is better than the national average. What I'm saying, we're -- first of all, again, if you want to compare metrics we're doing better --

KELLY: We're doing better than the public at large. Brit Hume is our Fox News senior political analyst. So, you know, we're not as bad as everybody else. We're bad. We're bad. It's not going to stop them from throwing rocks inside of glass houses, but wow, Jay Carney was on the ropes today.

BRIT HUME, FOX NEWS SENIOR POLITICAL ANALYST: Well, it was, and Megyn, the best part of it was when he endeavored to explain the reason why, you know, many women in the White House make less money than many of the men, he actually did a pretty good job of explaining why this whole idea that women make 77 cents on the dollar compared to men is snake oil because women make different choices about what kind of jobs they seek. They make different choices in reaction to marriage and child birth. They are oftentimes compared with men who are in very different jobs and the rest of it. So when those things, those factors are taken into consideration, studies have indicated that the pay gap all but evaporates.

But here's what the viewers need to know. This is being put out there right now despite the fact that there are laws on the books because they are trying to create a political wedge issue. Are they not?

HUME: I think so, Megyn. I think it's not clear to me this is going to work as a political wedge issue. I think it's an issue that is likely to be a reminder to women who voted for President Obama that he and his party are on their side, and they need to come out this fall and vote Democratic. I think it will do a much better job of rallying the base if it does anything at all than it will on convincing women who are either Republicans or independents to vote for a Democrat this fall.

KELLY: Is there any risk to the Democrats in doing this because, you know, their own Labor Department is basically saying that the pay gap is more like five cents.

KELLY: And so, coming out and purporting over and over again to say that it's 23 cents which it's not and the White House is even admitting, you know, that it's not. Its numbers are wrong. Do they run the risk of A, losing more credibility when it comes to numbers and B, the risk of infantilizing women by saying, if there's any disparity -- and it may be wrong, and it may be illegal -- what you need is me, Uncle Sam to come in and try to rectify, you can't argue on your own. You can't sue on your own, you needed the feds to come in and rectify it for you.

HUME: Well, that's a kind of a conservative argument, but I think it will -- that view will be -- a lot of women will react that way. How many of them are people who are ever going to be much exercised by this whole issue to begin with is unclear. And I would also say that one thing I did notice in this particular case is, it wasn't just Fox News calling the president out for this bogus statistic he's been using, a lot of other media did too.

HUME: Yes. Major Garrett was all over it. And with Jonathan Karl of ABC News who's asking those questions.

HUME: Yes. Even Slate which is decidedly a liberal online magazine was on this as well. And so I think this is probably not going to work very well. But, you know, they are going to try it anyway.

Look, if you're in the situation this president and his White House and his administration are in now with foreign policy and the state of near total collapse with all that's happening in the world and ObamaCare having turned out the way it did and the economy never really reaching the kind of robust recovery we all hoped for, you have to talk about something other than those things.

HUME: I didn't say it's going to work, I said it probably wouldn't work.

HUME: Well, there are times that -- I've been here a long time and I don't understand it either.

KELLY: All right. Good to see you.