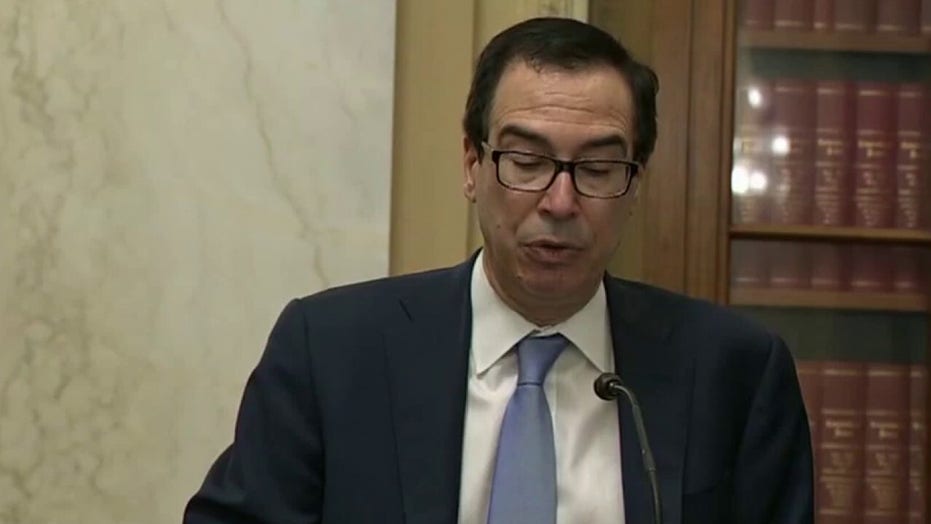 This is a rush transcript from "Your World," June 10, 2020. This copy may not be in its final form and may be updated.

STEVEN MNUCHIN, U.S. TREASURY SECRETARY: I think we’re going to seriously look at whether we want to do more direct money to stimulate the economy.

NEIL CAVUTO, FOX NEWS ANCHOR: All right, that seems to be the Treasury secretary hinting, maybe telegraphing that more help is on the way for the economy, this as we got word from the Federal Reserve chairman that interest rates will stay at or roughly where they are now maybe for another couple of years.

That was one of the reasons why the Nasdaq, for example, climbed over 10000 today. We will get into that a little later in the show.

First, on this need for more stimulus, let’s get the read from Idaho Republican Senator James Risch on all of that.

Senator, thank you for taking the time.

Do you think we need more stimulus?

SEN. JAMES RISCH (R-ID): Well, Neil, let me -- let me say that I started the hearing this morning by complimenting Secretary Mnuchin for how he’s handled this.

When they write the history of COVID and the financial fallout from it, I told him I think he’s going to get his own chapter in the book. He has just performed amazingly well.

As one who doesn’t worship at the altar of government, I had real reservations about what we were doing. I voted for it. I thought it was the right thing to do. But when you throw in $2.8 trillion against the wall and hoping it’s going to work, you know there’s going to be glitches.

And the one thing I have seen said is that, look, if you listen to the national news or read the national news, you think that this thing is all full of problems. This has been a tremendous success.

PPP has benefited over 4.5 million business, tens of millions of employees. They have done a great job of that. Are there some glitches with it? Of course. But they’re de minimis, compared to all the good that it’s done.

So, they have done a great job. As far as more money, I have to tell you that enthusiasm for spending more is rapidly declining in these chambers, when we see what’s happening to the economy.

If someone would have told you two months ago that the market was going to be where it is right now, the markets, you would have shook your head and said, that’s impossible.

So, the places are opening. People are going back to work. So I would -- and not only that. Out of the $2.8 trillion that was appropriated, less than half of it has been put to work. So, there’s a lot more money sitting on the sidelines that can go into the economy.

CAVUTO: So, you don’t think it would be necessary to add to that for the time being?

Because Democrats argue just the opposite. We seem to be getting signals, sir, out of the White House that they’re open to more. I think they want a payroll tax cut, things like that.

CAVUTO: But they want to do more. It sounds like you’re -- you’re saying, go slow.

I’m not saying, don’t do more. I’m saying, let’s wait and see. When you -- when you have put less than half of the almost $3 trillion to work, why don’t we see how -- look at what that first half is done. Look where it’s gotten us.

I mean, things are moving very rapidly today. And at the end of the day, it may need more. This is a unique circumstance that we’re in. I’m open to it. I think everybody is open to it.

But things are moving very rapidly now. And I think we ought to be cautious. We ought to put the next foot down slowly as we put it down.

CAVUTO: Senator, a couple of developments that, as a United States senator, I’d be curious to get your take.

The president wants to pull troops, a lot of troops, maybe all of our troops, when all is said and done, out of Germany. How do you feel about that? Some of your colleagues were anxious about it.

RISCH: Well, I think everybody’s anxious about it, because we don’t know all the details yet. I haven’t talked to the president since he -- since he has said that.

I will be doing that. We’re all going to want to hear details about it. That’s a longstanding contingent of people that we have there since World War II. It’s really become a hub in the world for movement of troops, movement of equipment, particularly medical care for our troops.

We’re going to want to hear some more details on it, and we will be discussing it with the president.

CAVUTO: While I also have you here, Senator, if you don’t mind, Kayleigh McEnany today was asked a lot of questions on this elderly protester who was shoved by the police at a rally against the treatment of George Floyd, and that it was a setup.

Do you believe the president that this guy was a setup?

You can find about anything you want on the Internet these days. I saw the video, like everybody else does. It’s, what, 10 seconds’ long or something like that.

CAVUTO: Well, the president did.

I don’t mean to overstate this. And I’m thinking the guy did fall. He was bleeding from the back of his head.

CAVUTO: And so do you think that was responsible, when we really don’t know?

I enjoy his company. We exchange regularly. And we haven’t talked about this. It may or may not come up as we go down the pike. But, look, I -- I have my view on it. He has his view on it. I think most Americans have a view.

We will see if there’s more to come out on this...

RISCH: ... and so everybody can reach a conclusion.

CAVUTO: All right, well, I’m taking a leap here that, if it were you, you wouldn’t say that?

RISCH: Well, I -- you know, I haven’t reached a conclusion yet.

So, no, I wouldn’t say what something is. Look, I was a prosecutor. I -- I prosecuted thousands of cases. And what I have learned is, you want to sift through the evidence really carefully before you move forward on something. Charging issues are always the most difficult there are.

As you proceed to trial, you better have your ducks in a row. But you want all the information before you reach the conclusion of where you want to take something.

Senator, thank you very much, sir. It was very good having you on.

CAVUTO: James Risch, the Republican of the beautiful state...

RISCH: Good to talk to you.